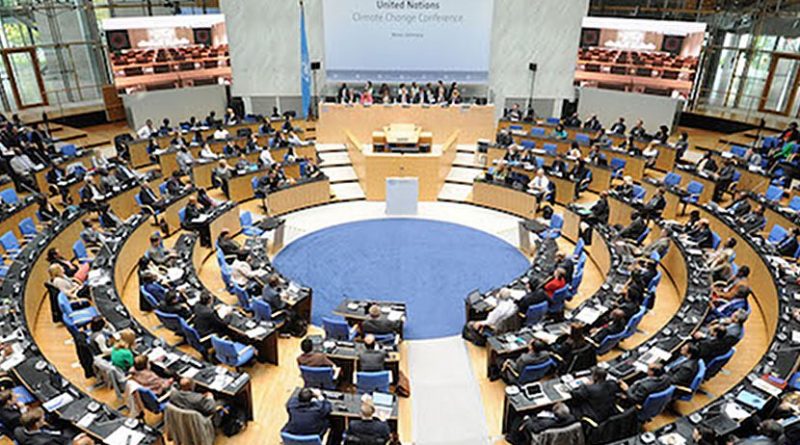 The great hopes for a historical understanding to contain global warming in the wake of the proclamations of world leaders prior to the recent UN climate change conference in Bonn have evaporated.

The ‘climate’ of confidence surrounding the conference – held in Bonn from November 6 to 17, officially known as the 23rd session of the Conference of the Parties (COP 23) and presided over by Fiji – soon disappeared into thin air as environmental experts looked at what, if anything, had been achieved.

Criticism has centred on the failure to establish either a “compliance control committee” or a “sanctioning mechanism” against countries which do not respect the commitments they have entered into.

In practice, these are legally non-binding agreements, implementation of which is linked only to the environmental sensitivity and political determination of the various governments, but which are often however heavily influenced by enormous economic interests, primarily those of the multinationals in the energy and automotive industries.

The Bonn conference, which many believed should have accelerated action and set more stringent rules on measures to combat climate change, ended without any major decision, so that a kind “supplementary session” will now take place at the Paris summit in December.

This was a partially announced failure which was confirmed by the absence of the most important world leaders (except German Chancellor Angela Merkel and French President Emmanuel Macron) and the great international media circus, which largely deserted the event.

However, despite their low profile, four decisions were worthy of note:

For all the rest we are at a complete impasse.

In real terms, no significant decisions were made regarding the following:

Responsibility for failure is mainly due to the national selfishness of the most industrialised countries, which, although they claim to want to move forward regardless of Trump’s positions, have distinguished themselves by their absence or “vague” declarations. Take Merkel, for example, who first said that “the question of climate is a central challenge for the world, a question of humanity’s destiny” before carefully changing tack: “The closure of coal-fired power stations is a social problem to be dealt with calmly,” de facto postponing the decarbonisation of energy in her country to an unspecified date.

According to Merkel, doing so now would lead to an increase in the cost of energy.

The failure of the work of the climate conference is summarised in the concluding document, which explicitly calls on UN Secretary-General António Guterres to take care that Member States actually put in practice what has been decided.

The present state of the atmosphere

While the ritual comedy of ‘wait-and-see’ and inconsistency took to the stage in Germany, reports on the subject published by various research institutes were photographing an alarming evolution of both the chemical composition of the atmosphere and global weather and climate conditions.

According to the climate report issued at the end of October by the World Meteorological Organization (WMO), the concentration of CO2 (the main greenhouse gas) in the atmosphere has stabilised at well over four hundred parts per million – rising, in fact, from the 400 recorded in 2015 to 403.3 at the end of the following year.

This represents a structural overrun of the safety threshold set at 350, beyond which the possibilities of reduction become extremely complex.

Indeed, even if we were able to completely eliminate pollutant emissions today, the concentration of CO2 in the atmosphere would continue to increase for a few decades – because of the inertia of the phenomenon – making it difficult to return to under this threshold.

This particularity, typical of complex systems, has been confirmed by the annual report of the Dutch Environmental Assessment Agency (NEAA), which shows that in 2016 – for the third consecutive year – global CO2 emissions remained unchanged, but this has not, however, served to contain the increase of concentration in the atmosphere.

To date, the presence of CO2 in the atmosphere has increased by 145 percent compared with the pre-industrial era (1750), with an abrupt rise in the last half century, during which it rose by about eighty parts per million, rising from about 320 to the current 403.3 parts per million.

This is an unstoppable growth which, if not radically addressed, is likely to undermine the goals set out in the Paris Agreement: limiting the rise in the average terrestrial temperature – again compared with 1750 – to 2° C (possibly 1.5) from here up to the end of the century.

If we consider the peculiarities of the Earth system with regard to the CO2 absorption cycle and that, based on the WMO report, the average temperature of the oceans and the atmosphere has increased by 1.1° C compared with the pre-industrial period, the overall picture becomes dramatic.

In the absence of concrete measures aimed at reducing global emissions, according to scientific forecasts we are heading towards an average rise in terrestrial temperature of between 3 and 5° C, with catastrophic consequences on agriculture and on the very life of people.

Alarming confirmations with respect to forecasts are reaching us on the climate values front.

The WMO report issued on the eve of COP23 states that “it is very likely that 2017 will be one of the three hottest years on record”, thus confirming the inexorable warming trend already established by the statistics: from the beginning of meteorological surveys (1880), 16 of the 17 hottest years – except for 1983 – were those from 2001 onwards.

Of course, the data disseminated by research institutes refer to the Earth as a whole, without taking into account the local implications of phenomena in progress, which unfortunately sometimes occur through dramatic meteorological abnormalities (resulting in devastating effects on the environment and people).

In recent years, in many terrestrial regions, there has been a significant increase in extreme climatic events such as hurricanes and catastrophic floods, water bombs and torrential rains, heat waves and record droughts, melting of polar ice caps and rises in ocean levels.

According to WMO data, the January-September 2017 interval was characterised by a global average temperature of about 1.1° C above the pre-industrial level.

North-western United States and western Canada, on the contrary, recorded lower temperatures than the average of the 1981-2010 period.

How can the course be reversed?

Global warming and climate change – coupled with a worrying rise in extreme weather events – are not just a matter of academic concern. They are phenomena of such seriousness that they damage the lives of ordinary citizens – for example, impacting on agricultural production, with life-threatening consequences for the farmers of the South of the world, who are increasingly forced to abandon their now parched lands to seek hope of survival elsewhere.

Migration due to climatic-environmental causes is dramatically rising, to the extent that 23.5 million people were involved in 2016. Faced with this human tide, the United Nations and international conventions, particularly that of Geneva, should finally recognise the status of “climatic refugees”, guaranteeing the possibility of requesting asylum to those who find refugee abroad.

The situation is progressively becoming more dramatic and intervention times are increasingly shrinking, so the continuous beating around the bush by world leaders finds no justification.

It is necessary to intervene quickly and with incisive actions aimed at overcoming the current development model – based on the infinite pursuit of growth and dependence on fossil sources – introducing new forms of production based on the circular economy, agroecology, decarbonisation and renewable energy sources, in the perspective of a transition to an ecosocialist society, the only one capable of assuring the rights of workers and of the environment, indissolubly linked to resistance to capitalism: climatic justice is also social justice.

It is necessary to act now without hesitation before it is too late and alteration of the Earth system becomes irreversible: at stake is not only the fate of the environment and the planet, but of humanity as a whole.

* Andrea Vento is a member of Gruppo Insegnanti di Geografia Autorganizzati (Self-organised Geography Teachers Group). This article was originally published in Italian under the title Una Conferenza sui Cambiamenti Climatici all’Insegna dell’Immobilismo in Utopia Rossa. Translated by Phil Harris. Views expressed in this article are those of the writer and not necessarily of IDN-INPS.