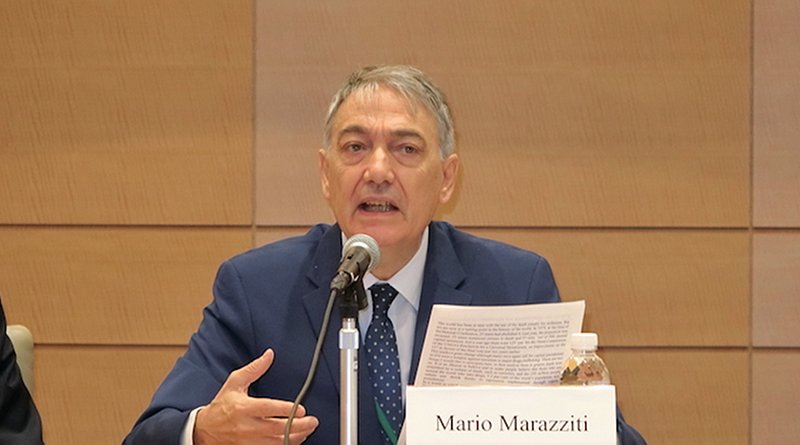 Mario Marazziti, co-founder of the World Coalition Against the Death Penalty in 2002 and Member of the Italian Chamber of Deputies. Credit: Katsuhiro Asagiri | INPS-IDN Multimedia Director.

An international conference “No Justice Without Life” has called on Japan to halt all executions next year, the year of the Olympic Games. Japan is one of the 56 nations which retains capital punishment, also known as the death penalty or death sentence for capital crimes. In fact, Japan, the United States and South Korea are the only nations in the group of developed economies that meet out death penalty.

The conference was held on November 22 in the office building of the Diet members of the Lower House in Tokyo in the lead up to and in support of the arrival of Pope Francis on November 23 for the four-day papal journey, which put at the centre ‘the defence of life and human dignity in every circumstance’.

Mario Marazziti of the Sant’Egidio Community, co-founder of the Worldwide Campaign against the Death Penalty, who was in Japan during Pope Francis’ visit, expressed hope the pope can “inspire Japan” to start rethinking the death penalty.

Sant’Egidio is a Christian community established in a secondary school in the centre of Rome at the initiative of Andrea Riccardi in 1968, right after the second Vatican Council, which addressed relations between the Catholic Church and the modern world. Over the years, Sant’Egidio has developed into a network of communities in more than 70 countries of the world.

“The Community pays attention to the periphery and peripheral people, gathering men and women of all ages and conditions, united by a fraternal tie through the listening of the Gospel and the voluntary and free commitment for the poor and peace,” says the Community’s website.

Marazziti, a staunch opponent of death penalty, told the conference: “Capital punishment always adds another death to one already inflicted”. The families of those murdered are often told “a lie” that capital punishment does “justice” and contributes to “healing pain”. This view contributes to public opinion polls showing that a majority of Japanese favour the death penalty.

The fact however is that “instead it freezes resentment and leaves people spending years waiting for revenge,” said Marazziti, an eminent Italian journalist committed to the abolition of death penalty.

Marazziti’s proposal for 2020 Olympic Moratorium on the death penalty drew wide support including from the Embassy of Italy in Tokyo, All-Party Parliamentary Group to Consider the Future of the Death Penalty in Japan, and Japan Federation of Bar Associations. Those that cooperated in organizing the conference were: Seimeizan Shweitzer Temple and the Soka Gakkai Peace Committee.

The relevance of the conference theme was underlined by the eighty-three year old Iwao Hakamada, a death row convict, and his sister Hideko (86) attending the conference. Hakamada has become a symbol of a movement opposing the death penalty in Japan.

Hakamada, a former boxer, was released from prison in 2014 because of new DNA evidence. That ruling was overturned by a higher court last year, which questioned the DNA tests. The case is now before the Supreme Court.

Hakamada’s supporters and lawyers say he was victim of a criminal system that relies so heavily on forced confessions that it has come to be known as “hostage justice”.

Hakamada confessed to the murders but asserted his innocence when his trial began. According to official documents, he had been questioned, beaten and bullied by police for more than 10 hours daily without an attorney present. He was convicted of the 1966 murder of his boss at a soy bean paste-maker and the man’s wife and two children. He was sentenced to death in 1968.

One of the judges who convicted Hakamada acknowledged later that he had serious questions about the case from the start, said an Associated Press report.

The police presented as evidence blood-stained clothing found in vats of soy bean paste, although the vats had been thoroughly searched before.

The judge with misgivings attempted suicide over his feelings of guilt. He was later baptized and took the same baptismal name as Hakamada’s, Paulo, and added Miki, the name of a Japanese martyr. Other boxers have come out in support of Hakamada.

“I pray to Jesus Christ and appeal for my innocence from 9 until 10:30 every night,” Hakamada wrote while in prison. “During this prayer time, I can be free from suffering. Thanks to God’s love and blessing, I exist and cry for the truth and walk toward tomorrow.”

“He has been on death row for so long. He is still on death row,” his sister, Hideko, told particiü that gathered recently to discuss the death penalty at the Diet building in Tokyo. “I am filled with joy he came back to me alive,” she said, choking back tears.

She noted her brother was “not yet back to normal” and prone to delusions because of the trauma of prison.

At the conference, lawyers supporting Hakamada’s appeal for retrial raised and asked whether one after another it was appropriate for the State “from the perspective of human rights, to take away life from citizens?” Once death penalty is executed, it is irrevocable- A wrongly convicted person cannot be brought back to life.

Takeo Kawamura, President of the All-Party Parliamentary Group to Consider the future of the Death Penalty in Japan, said: “While there is a persistent affirmation among Japanese people behind the maintenance of the death penalty system, there are voices calling for its abolition in consideration of the risk that innocent people could be executed. There is a need to trigger a nationwide debate on this issue.”

The fact that the conference was organized one day ahead of the papal visit to Japan was also to recall that Pope Francis decreed the death penalty “inadmissible” last year, amending the Catholic teachings called Catechism.

Hakamada who converted to Catholicism during his decades on death row, was invited to the Pope’s Mass at Tokyo Dome and was there with his sister. Much to his disappointment and against expectation, Pope Francis did not speak to him. The pontiff said later he did not know about Hakamada’s case.

But he said in his press conference on the plane way back to the Vatican that in his meeting with Prime Minister Shinzo Abe on November 25 he had mentioned the need to abolish capital punishment.

According to Kyodo News, the pontiff said that “we need to  tackle bit by bit (the abolition of death penalty in the world)” expressing the view that it would take time to make progress.

The pontiff also visited Hiroshima and Nagasaki, the two sites of the world’s first atomic bombings. During an in-flight press conference on his way back to the Vatican, Pope Francis said his visit to Hiroshima was a moving experience. In Hiroshima, he spoke with atomic bomb survivors, and heard their stories. He said the Catholic Church will state in its teachings that the use and possession of nuclear weapons is immoral.

“He said he would not use atomic energy until there is total security of use;” NHK World reported.

Video of the opening keynote address by Mario Marazziti at the conference: https://www.youtube.com/watch?v=mK6mIQErl0A&t=12s