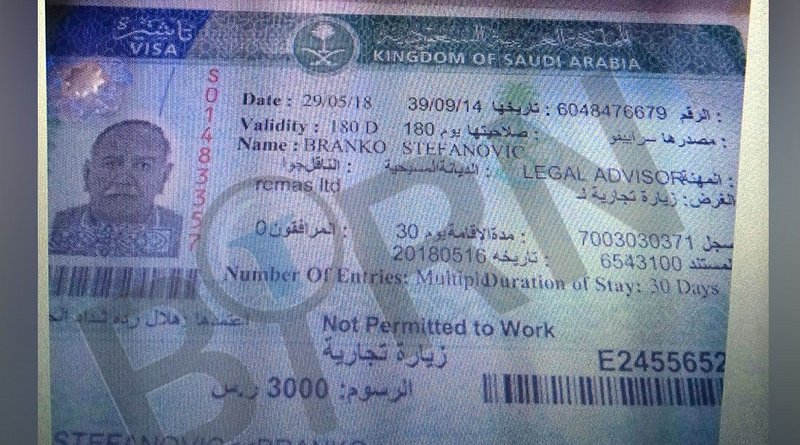 While senior Serbian officials continue to downplay the Interior Minister’s father’s role in the arms trade, BIRN has obtained documents that show his high-level activities in this field.

By Jelena Veljkovic and Aleksandar Djordjevic

The information comes after senior officials downplayed Branko Stefanovic’s involvement in the arms trade through the intermediary arms trade company.

Officials have minimized Branko Stefanovic’s role in the company. His son at one point insisted that his father was “not affiliated with GIM in any way”, while Serbian President Aleksandar Vucic has since said that he was just an ordinary employee there.

However, documents that BIRN has obtained show that Stefanovic was not an “ordinary” staffer.

They show that in June 2018 he got a visa to travel to Saudi Arabia with GIM’s owner, Goran Todorovic, and its general manager, Dragan Djuric, while the letter of application sent to the Saudi Arabian embassy listed Stefanovic as the firm’s legal adviser.

In November 2018, a BIRN investigation revealed that Stefanovic had mediated in arms deals between Krusik and a private Saudi Arabian company, Rinad Aljazira, and had visited Krusik in May 2017 as one of three representatives of GIM.

GIM has grown from a very small firm to one with a large annual turnover in a short time. Financial reports show that its income rocketed from only about 340,000 euros in 2016 to more than 8 million euros in 2017. The latest data, for 2018, show the company doubled its income again compared to 2017, which coincides with Stefanovic’s involvement in it.

A report published on September 15 by the specialist portal Arms Watch, based on leaked documents, meanwhile claimed that some of the weapons that GIM obtained ended up in the hands of ISIS fighters in Yemen. Saudi Arabia is directly involved in the civil war in Yemen.

Soon after this news was published, a Krusik employee, Aleksandar Obradovic, was arrested on suspicion of having disclosed trade secrets. He was taken into custody but under public pressure, transferred later to house arrest. That measure is still in place.

The weekly magazine NIN has written that the Prosecutor’s Office for Organized Crime has asked Serbian intelligence agencies to collect information on Krusik’s trade.