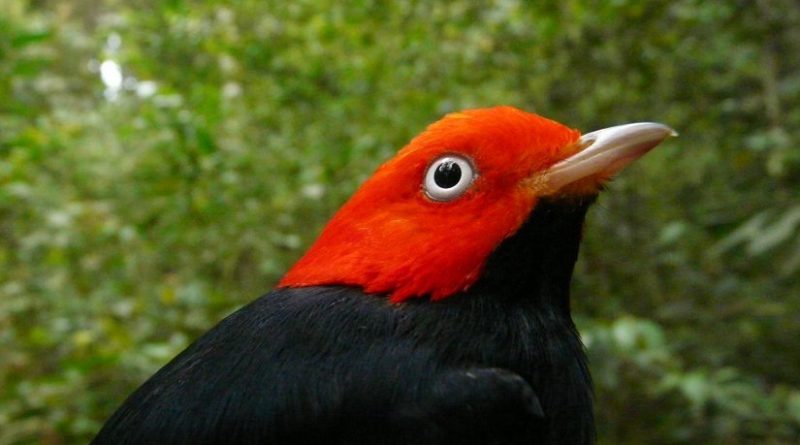 The future of the red-capped manakin and other tropical birds in Panama looks bleak. A University of Illinois research project spanning more than three decades and simulating another five decades analyzes how changes in rainfall will affect bird populations. The results show that for 19 of the 20 species included in the study, there may be significantly fewer birds if conditions become dryer.

The study took place in Panama’s Soberania National Park. It is approximately 100 square miles of protected rainforest in central Panama and home to well over 500 bird species. In the region, about 90 percent of the annual rainfall occurs in the wet season, typically from late April to early January. The key result of the study is that with longer dry seasons and more intense seasonal drought, there is an overall negative effect on bird populations. With climate change, there may be longer dry seasons. This is not good news for the birds.

“We caught over 250 different species in mist nets, but only had enough data to model 20 of the most common,” said Jeff Brawn, U of I ecologist and department head of Natural Resources and Environmental Sciences in the College of Agricultural, Consumer and Environmental Sciences. “Capture-mark-recapture is the key. We let them go and then capture them again. How many we recapture is how we estimate survival rate and the changes in the size of the population.”

Only one of the 20 species in the study tended to increase with dryer conditions–the scaly-throated leaftosser.

“That one seemed to have a favorable reaction to changes in seasonal drought. We don’t know why. It just consistently seemed to do better,” Brawn said.

What makes this study unique is the duration.

“You can’t study the effect of changing environmental conditions and its relationship to bird populations without a long-term study and long-term data,” Brawn said. It is also one of the longest and first studies to examine tropical bird populations and climate change.

Data from 1977 to 2011 became the basis of the simulation for the study. Brawn’s team looked at the relationship between population growth rates and the length of the dry season during those 33 years, then simulated another 50 years with an average of a 10 percent change in the rainfall pattern in Panama’s dry season. The full 10 percent change is only about 12 days longer, which isn’t a big time difference. The simulation suggests that, in time, the bird community will be very different under dryer conditions.

Seasonality in Panama is rain/no rain, said Brawn. “Because the tropics are relatively stable weather wise, tropical birds aren’t able to handle environmental disturbances as easily, physiologically or behaviorally, as temperate-zone birds. Birds in the Midwest have below-zero winters and 100-degree summers–environmental stress that tropical birds never experience. Consequently, tropical ecosystems and animal populations may be more vulnerable to the effects of climate change.”

In 1993 and 1998, there were distinct El Niño events, which in that area of Panama means a longer dry season with less rain. Climatologists expect these events to become more common with climate change. Under these conditions, reduced populations of tropical birds may result in fewer birds to provide vital ecological services. Birds eat insects and prevent damage to the trees. They disperse seeds. They pollinate. Because of this, the ecological effect from bird species loss is potentially far reaching.

“And keep in mind that this study looked at just a small slice of the bird community in this forest. There are hundreds of bird species who live in the upper canopy, high above the reach of our mist nets. They’re harder to capture so we don’t have data on those species or those that are rarer.”

The fact that this kind of negative affect on a large population of avian populations can happen in a national park draws even more concern, Brawn said. “We worked in a good forest–that is, relatively intact. The study shows that even in a protected park, the large, global effect of climate change could make a lot of habitat unsuitable for a lot of species.

“Modeling out results into the future, the logical outcome of that is that there will be winners and losers,” Brawn said. “Some species will do very poorly and some will do well but the bottom line is, the tropics will be very different than what we experience now. We’re not saying it will be a silent forest but it will sound dramatically different 100 years from now with songs from only those species who persist.”

Interestingly, this research didn’t begin as a study in climate change. James Karr began charting the demography of tropical birds as a U of I graduate student. Later, he became Deputy Director of the Smithsonian Tropical Research Institute (STRI). Brawn had a post-doctorate position with Karr at STRI. In about 1991, Karr handed over the reins and Brawn continued the work in Panama. Decades later, tropical forest ecologists began reporting that some tree species are sensitive to more intense seasonal drought. Atmospheric modelers predicted the length of the dry season may dramatically change in the tropics, making it shorter in some places and longer in others. Brawn connected the dots, applying the annual changes in rainfall to bird populations.