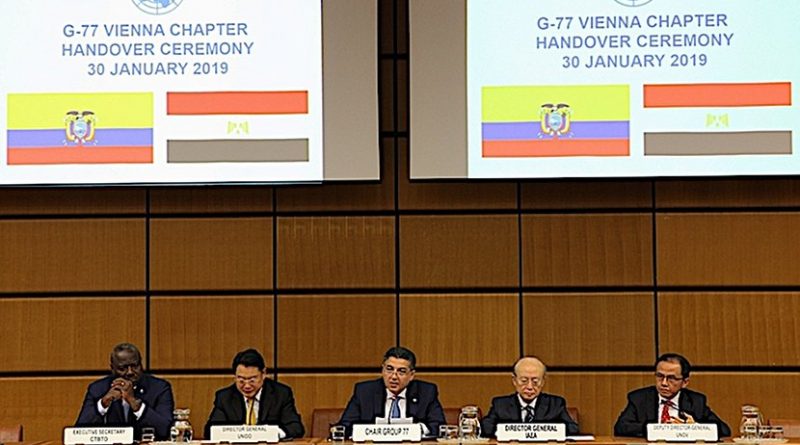 While the State of Palestine has in a historic move taken over the presidency of the Group of 77 (G-77) and China at the United Nations in New York, Egypt has assumed the chairmanship of the Vienna Chapter of the largest Inter-Governmental Organization of developing countries in the UN, comprising 134 countries representing some 80 percent of the world population.

Egypt has been a staunch supporter of the Palestinian cause since the 1950s. Even today Cairo maintains strong relations with the Palestinian Authority and it favours peace between both Israel and Palestine.

Vienna is one of the four headquarters of the United Nations, along with New York, Geneva and Nairobi. In September 2018, the Vienna Chapter commemorated its 20th Anniversary at the Vienna International Centre.

The office of G-77 Vienna Chapter, which was inaugurated on May 19, 1998 by Carlos Margariños, the Director General of the United Nations Industrial Development Organization (UNIDO), has serviced all Vienna-based organizations by providing administrative support to the members.

It serves as institutional memory of the Group’s activities and represents an effective link for better coordination, communication, and cooperation between the Vienna-based organizations (VBOs) and the Group, which employs more than 4,000 employees from over 110 countries.

Director General LI Yong of UNIDO, which finances the G-77 Vienna Chapter, participated in the handover ceremony of chairmanship. In an official event on January 30, Ecuador’s representative Verónica Gomez-Ricaurate handed over the 2019 presidency to Ambassador Omar Youssef, Permanent Representative of the Arab Republic of Egypt.

Heads of Missions and delegates of G-77 countries and other regional groups as well as high-level officials from all the VBOs attended the ceremony. These included the United Nations Office on Drugs and Crime (UNODC), International Atomic Energy Agency (IAEA), and the Preparatory Commission for the Comprehensive Nuclear-Test-Ban Treaty Organization (CTBTO).