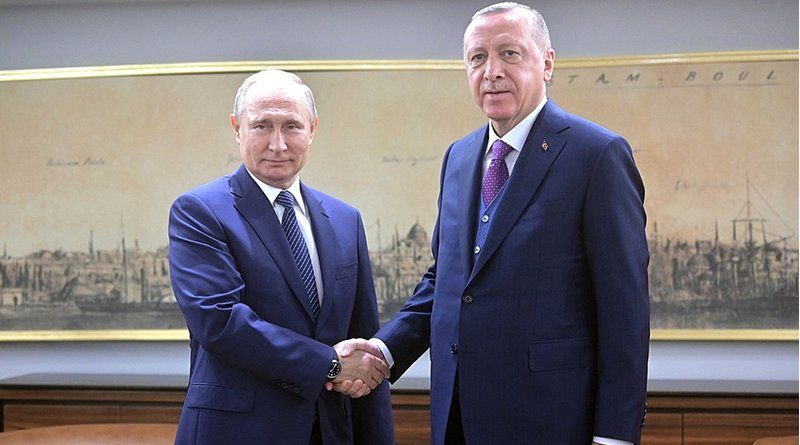 Turkey is now in direct conflict with the Syrian government for the first time since 2011. It is something that few in Turkey and beyond are able to comprehend. How far will Turkish President Recep Tayyip Erdogan go with his latest incursion deep into the renegade province of Idlib, risking his shaky alliance with Russia and reviving the possibility of an all-out military confrontation with Moscow?

Last Thursday, Turkey suffered its worst loss in Syria, when regime jets struck positions south of Turkish observation posts in Idlib, killing at least 34 and wounding dozens. In response, Erdogan gave the Syrian army 48 hours to pull back, while promising to launch a full-scale attack. He also told President Vladimir Putin to “step aside” and let the Turkish troops, and their Syrian opposition allies, take care of the regime of Bashar Assad.

On Sunday, Ankara sent more troops and heavy armor into Idlib under a new operation called “Spring Shield,” whose objectives remain unclear. On the same day, Turkey downed two Syrian jets over Idlib, while Damascus claimed it had shot down three Turkish drones. Ankara has successfully used drones and artillery to hit Syrian positions, resulting in many casualties, including fighters belonging to Iranian militias and Hezbollah.

As the Syrian government closed its airspace over Idlib province, Moscow warned on Sunday that it could not guarantee the safety of Turkish aircraft operating over Syria.

Turkey was shaken when Russian-backed Syrian troops began a large-scale military operation to recapture towns in Idlib last December, thus violating a de-escalation deal between Ankara and Moscow under the Sochi agreement. Erdogan watched nervously as Syrian troops took over strategic towns, including Saraqeb, while dealing heavy losses to rebel groups, which both Syria and Moscow consider as terrorists. Moscow blamed Turkey for failing to keep its end of the bargain by separating moderate fighters from those belonging to Hayat Tahrir Al-Sham, formerly Al-Nusra Front.

Damascus’ offensive has resulted in a major humanitarian crisis, with tens of thousands of displaced Syrians seeking refuge close to the closed Turkish border under dire conditions. Turkey says almost 1 million Syrians have been displaced by the latest offensive. It stated that it could not receive additional refugees.

Putin’s refusal to budge has electrified ties between Ankara and Moscow. Erdogan has found himself being dragged into what looks like an untenable situation in Idlib. He turned to the US and NATO, demanding support and asking Washington to deploy Patriot air defense batteries along his border with Syria. So far, the US has not committed and Erdogan only got lip service from his Western allies. In response, the Turkish president has threatened to unleash a new wave of migrants toward Europe and, on Sunday, tens of thousands of refugees were allowed to head toward the land border post with Greece, which denied them entry.

Putin initially resisted holding an urgent summit with Erdogan, although a meeting in Moscow has now been planned for Thursday. The Russian president is doubling back as his government announced on Sunday that only its troops are legally present in Syria. This was a response to Erdogan’s ironic claim that Turkey was in Syria at the request of the Syrian people.

While Erdogan’s bargaining position has improved in the last few days, as his troops have made headway in Idlib, his endgame is vague. Russia has managed to restrain his military ambitions east of the Euphrates and now he finds himself driven into a possible confrontation with Moscow in Idlib. Neither side would want such an outcome, but for Turkey to deny the Syrian army the legitimate objective of liberating its own territory is both puzzling and provocative.

Erdogan has few allies left after breaking up with Europe over Syria and Libya. He seems to be lost between his personal ambitions and the national interests of the Turkish people. His aim now is to push back the Syrian government troops and reach a cease-fire. But then what? Regime change in Damascus is no longer a goal being sought by the US, Europe, or even most Arab countries. Russia is pushing for a political process once the liberation of Syrian territory is achieved. Erdogan’s latest gambit is preventing that.

But can he afford to engage in a war of attrition in Idlib, which could cost more Turkish lives while exasperating a humanitarian crisis and testing the public’s patience at home? His attempt to redefine his goals in Syria, by targeting government forces directly, will be resisted domestically. His party, the AKP, is losing ground and his old allies who helped him solidify his grip on power have walked away. Idlib may become his ultimate quagmire.