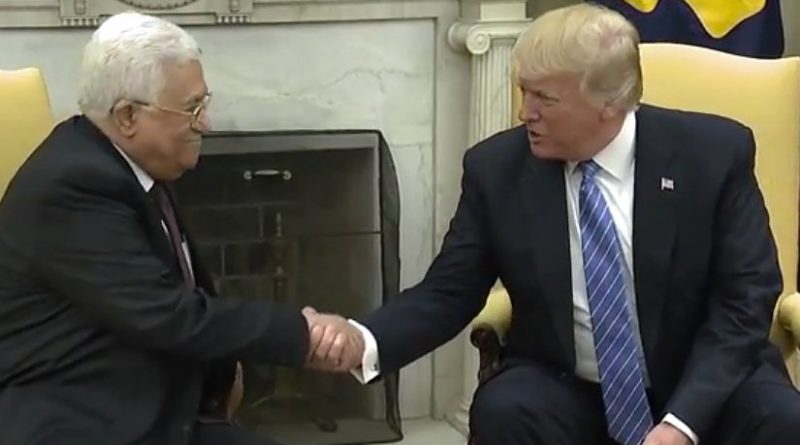 Walking in the footsteps of many of his predecessors who delved into Israeli-Palestinian peacemaking — but ultimately failed — US President Donald Trump launched Wednesday his own “process which hopefully will lead to peace.”

Trump, striking an optimistic note during his meeting with Palestinian President Mahmoud Abbas, pledged that “we will get this done.”

The Trump-Abbas meeting concluded a series of consultations the new US president held with regional leaders since assuming office. He hopes to resume Israeli-Palestinian negotiations that have been stalled since March 2014.

An analyst, however, pointed to an ever widening gap between the two sides, lowering the chance of any final agreement in the short term.

In statements from the Roosevelt room at the White House flanked by both the American and the Palestinian flags, Trump gave a much-needed boost to Abbas ahead of a working lunch with the delegation. “I want to support you in being the Palestinian leader who signs his name to the final and most important peace agreement that brings safety, stability, and prosperity to both peoples and to the region,” Trump said.

Abbas has been marginalized following the breakdown of talks three years ago. His meeting with Trump, according to former White House official and peace envoy Dennis Ross, gives him “relevance and a boost” on both the Palestinian front and the regional arena.

Ross, a fellow at the Washington Institute for Near East Policy, told reporters that “the gap between the parties has probably never been greater” but not impossible for Trump to overcome with a gradual trust-building approach.

Trump, while sounding hopeful about a peace deal, warned that “any agreement cannot be imposed by the United States… Palestinians and Israelis must work together to reach an agreement.”

The former real estate mogul promised to “do whatever is necessary to facilitate the agreement — to mediate, to arbitrate anything they’d like to do.”

Trump even extended another possible invite to Abbas in “welcoming him back as a great marker of progress and, ultimately, toward the signing of a document with the Israelis and with Israel toward peace.”

Abbas lavished Trump with praise for his leadership on the issue. “I believe that we are capable under your leadership and your stewardship — your courageous stewardship and your wisdom, as well as your great negotiating ability — that we can be partners, true partners, to you to bring about a historic peace treaty,” Abbas said.

Abbas who has been in office since 2005 and was part of two failed US attempts to negotiate peace under George W. Bush and Barack Obama, reiterated the Palestinian principles for peace.

“Our strategic option, our strategic choice is to bring about peace based on the vision of the two-state — a Palestinian state with its capital of East Jerusalem that lives in peace and stability with the state of Israel based on the borders of 1967,” Abbas said.

US Vice President Mike Pence contended ahead of the meeting that the White House is “seriously considering” moving the US Embassy in Israel from Tel Aviv to Jerusalem.

Abbas decried the Israeli occupation, saying “it’s about time for Israel to end its occupation of our people and of our land after 50 years.”

Both leaders avoided mentioning any specifics on the way forward beyond a US push to counter incitement and hate rhetoric from the Palestinian side. Trump concluded his statement challenging the naysayers, and said “let’s see if we can prove them wrong.”