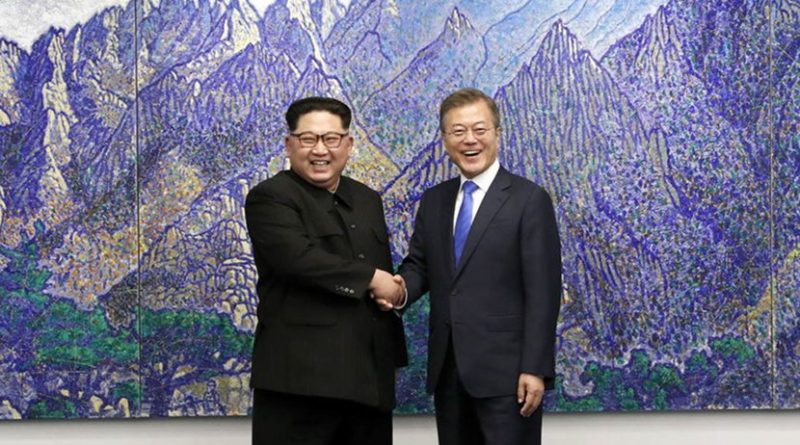 1 Analysis
May 4, 2018 Published by the Foreign Policy Research Institute 0 Comments

(FPRI) — The astonishing moments were too many to count during the summit on Friday, April 27 between North Korea’s Kim Jong-un and South Korea’s Moon Jae-in. Kim pulling Moon over to the northern side of the border in an unscripted move, Kim and Moon marching down the red carpet to the tune of traditional Korean music, Kim’s team of bodyguards running alongside his Mercedes Benz when he went back into the north—it’s almost impossible to pick out one moment more astounding than another.

My own personal favorite was Kim’s joke to his sister Kim Yo-jong, Director of the Propaganda and Agitation Department of the Worker’s Party, when he told Moon they had brought Pyongyang cold noodles, a culinary specialty of the north, with them “from afar.” Turning to her as if to recognize that she’s in charge of his outward image, he quipped, “I guess I shouldn’t call it ‘far,’” to the laughter of Moon and the rest of the people in the room. Overall, it was remarkable just to see Kim walk and talk outside of the carefully scripted settings of North Korean propaganda. It was a reminder that after all, the Supreme Leader is also a human being, albeit one that is in charge of a regime that operates brutal concentration camps and executes people for the slightest signs of dissent.

These optics, however, don’t mean much for inter-Korean relations or the road ahead. It’s often been repeated that summits between the leaders of North and South Korea are nothing new per se, and the world getting shocked that a North Korean leader can seem almost personable has also happened before. Sure, it may be a promising sign that all the symbolic gestures and proclamations of unity and peace went as planned, and if the leaders of North and South Korea have a good personal chemistry between each other, that’s undoubtedly a good thing. Still, by getting too swept up in the optics, we risk losing track of the substance.

In this realm, the summit was a mixed bag. North and South Korea have proclaimed denuclearization and peace before, just like they did this time, and the stuff about cooperation and exchange in sports and the like is old news. The promise to end the Korean War was also part of the 2007 declaration by Roh Moo-hyun and Kim Jong-il, though now, the two leaders declared it will happen this year. The 2018 statement contains a clause stating that disarmament will happen in a “phased manner,” which implicitly appears to go against the U.S. demand that denuclearization be one, sweeping agreement.

The circumstances are perhaps what makes this time different. The summit was partially a preparation for the planned meeting between Kim Jong-un and Donald Trump later this year, and with the summit progressing so smoothly, and raising hopes and expectations so much, the pressure is on the U.S. to reach tangible agreements and progress. Ironically, Kim Jong-un’s position of strength, going into the summit season as the leader of a nuclear state, may embolden him to take real steps on matters such as arms control and other issues since he already has a functioning nuclear deterrent, or at least one good enough to frighten the country’s adversaries. That North Korea will dismantle its nuclear weapons entirely remains unlikely, and the question is still whether the U.S. will accept that.

In all this, Kim Jong-un faces a challenging dilemma. On the one hand, he and North Korea have much to gain from closer ties and cooperation with the South. For example, one part of the agreement states that the two countries will cooperate on modernization and connection of railways and roads, and North Korea is likely to receive quite a bit of financial support to this end. This is likely just the beginning.

On the other hand, Kim can’t bring South Korea too close. The Korean peninsula is still in a state of competition (and war for that matter) between the two rival countries and systems. Though there is no doubt (probably even in North Korea) that South Korea’s economic system has brought vastly superior wealth to the population, Kim would risk his regime’s own legitimacy if he allowed the North Korean population to witness too much of South Korea’s living standards. Kim Jong-un may appear jovial, friendly, and even reasonable on camera, but it’s crucial to remember that at the end of the day, he remains a brutal dictator with regime survival as his primary goal.

Home » North And South Korea’s Leaders Meet: Why This Time Is Different And Why It Isn’t – Analysis