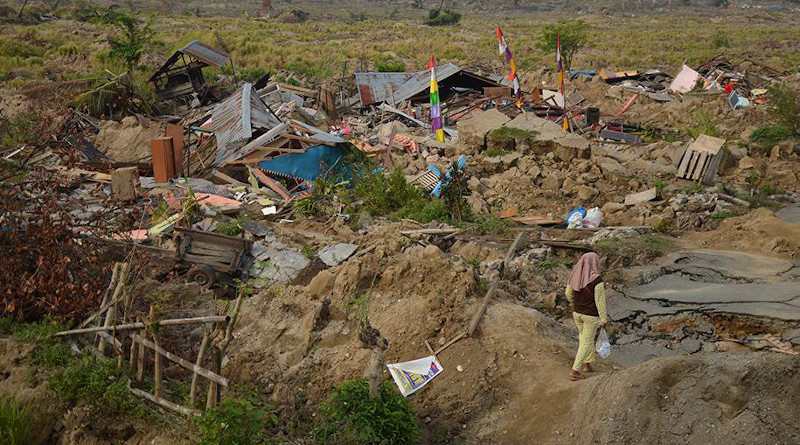 The aftermath of the earthquake and tsunami in the island of Sulawesi. Image credit: Pierre Prakash/EU Civil Protection and Humanitarian Aid/European Union (CC BY-NC-ND 2.0).

Many coastal communities in the Indonesian archipelago, including the proposed site of the new capital on the island of Borneo, could be at potential tsunami risk from submarine landslides, according to a study published by the Geological Society of London.

Tsunamis, whether caused by earthquakes, volcanoes or submarine landslides, pose a specific risk to the sustainability and resilience of coastal communities. They claim thousands of lives, damage to property and cause widespread destruction to infrastructure. South-East Asia is particularly prone to tsunamis due to its seismically active geology.

A British-Indonesian team of researchers which carried out the study, published this month (April) in the Submarine Mass Movements and their Consequences, has identified a number of ancient submarine landslides off the east coast of Kalimantan in the Makassar Strait, between the islands of Borneo and Sulawesi.

The researchers used seismic data to map underneath the seabed of the Makassar Strait, an important oceanic gateway through which the main branch of the Indonesian Throughflow (ITF) transports water from the Pacific to the Indian Ocean. They found evidence of submarine landslides spanning over 2.5 million years.The 19 landslides, ranging widely in frequency and size, happened every 160,000 years or so.

If the largest of these underwater landslides were to happen today, it would trigger a tsunami capable of inundating Balikpapan Bay, an area close to the proposed capital site.

Rachel Brackenridge, lecturer at the University of Aberdeen in UK and lead author of the study tells SciDev.Net, “If another slope failure was to occur, the generated tsunami would affect a region of Indonesia that has not historically been at risk. The majority of historic tsunami events in the Makassar Strait have been generated by fault displacement of the seafloor and are largely concentrated to the north of Sulawesi.”

“However, a forward submarine landslide wave would have to travel only 250 kilometres across the narrow strait before hitting the west coast of Sulawesi, and the reverse wave less than 100 km before inundating the east coast of Kalimantan,” she says.
The largest landslide, the study identified, was around 600 cubic kilometres, or the equivalent of around 1,000 Sydney Harbours.However, the likelihood of another event of this magnitude unfolding in the near future is not known at the moment.

Uisdean Nicholson, a sedimentary geologist at Heriot-Watt University in UK and co-author of the study explains to SciDev.Net: “Ifan event were to take place in the region we identify, the two coastal cities of East Borneo — Balikpapan and Samarinda — would be particularly vulnerable, as they are at or near sea level, and have a combined population of over 1.6 million people.”

“In Indonesia, these (early tsunami warning and mitigation) systems are primarily set up to monitor ‘megathrust’ earthquakes (a large type that occurs in a subduction zone or a region where a tectonic plate is thrust under another), especially around Sumatra and Java,” Nicholson says. “[But] there have been several catastrophic events in recent years showing that these systems are not adequate for other types of tsunamis — the shallow earthquake and landslides in Palu Bay in 2018, and the volcanic flank collapse of Anak Krakatua in 2018 are a case in point. These resulted in thousands of fatalities in the surrounding regions.”

Most tsunamis in the South-East Asian region are triggered by earthquakes or volcanic activity. The study identifies the ‘preconditioning mechanism’ — the strong current in the Makassar Strait (the ITF transports 10 million cubic metres of water a second) and frequent earthquakes capable of triggering landslides.

“Strong currents act as an underwater conveyor belt, transporting large volumes of sediment from the Mahakam Delta to a specific location — offshore Balikpapan — and leaving it in a very unstable configuration. This sediment then collapses periodically into the deep basin in a series of underwater landslides, capable of generating large tsunamis,” explained Nicholson.

In the next phase, researchers will be working to understand the likelihood of tsunamigenic submarine landslide happening again, and how it is triggered.

Phil Cummins, professor of natural hazards at the Australian National University in Canberra, tells SciDev.Net that the study is a crucial first step that shows just where and how the unstable accumulations of sediment that fail in a landslide form.

“Developing countries could obtain similar information about their submarine landslide hazard, although it requires doing marine surveys that many countries lack the resources to do. It is important that results of such surveys undertaken by commercial entities, e.g. for resource exploration, are made available to researchers for hazard mapping purposes,” says Cummins.

This piece was produced by SciDev.Net’s Asia & Pacific desk.