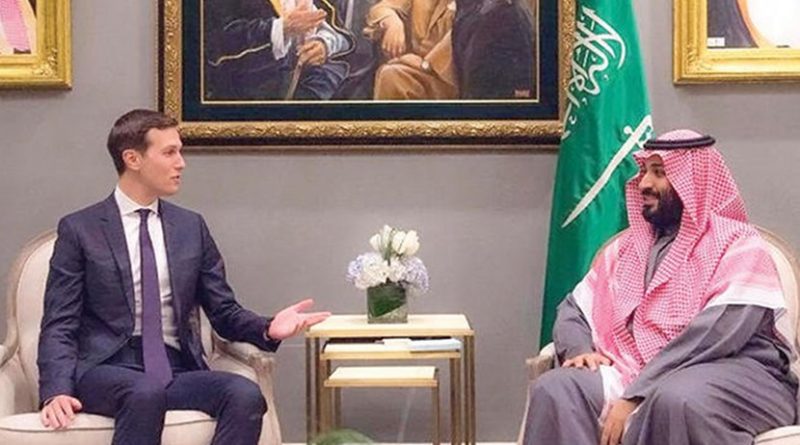 Jared Kushner has put a broken cart in front of a dead donkey in his quest to push forward with a Middle East deal. In gathering finance ministers from across the region to Manama on June 25 and 26, Kushner is asking them to blindly invest in a vacuum. Donald Trump’s senior adviser and son-in-law is asking donor states start the bidding without outlining what for.

Kushner is essentially saying “invest in this Trump project, and later on I shall tell you what that project is.” You cannot invest in an Israel-Palestine deal without agreeing the politics that is at the heart of the dispute.

Kushner is not revealing if his plan envisages a sovereign Palestinian state, the end of occupation or pretty much anything. He is also selling the fake deal that Palestinians will be prepared to sell out their rights for a better standard of living. We have heard this all before, economic road maps and the like, but all of them have crashed and burned. This is a dead horse that can no longer be flogged.

The timing, the aim and the end product are all off-key. Last week, Kushner touched down in Israel for a quick tete-a-tete with Benjamin Netanyahu, the latter hardly in the mood as he was trying to see if he can find a 10th political life. For Israeli politicians, the Manama conference has become a sideshow to a sideshow. It did not matter much before, except to turn up to please the hosts. The Israeli electorate has little faith in this process either.

Perhaps this will end up being a blessing for all sides. If it all goes nowhere, the Trump administration can blame political forces beyond their control. The wiser heads in the US will realize that yet another gargantuan diplomatic embarrassment has been conveniently kicked down the road.

Netanyahu can and will blame his opponents and rivals in Israel for being so inconsiderate as to not endorse his leadership. Israeli elections on Sept. 17 could mean the Kushner plan remains under wraps. Donor states, especially Arab ones, might be let off the hook for at least a few more months, if not longer. The awkward decision about how to balance vital security and economic relations with the US against national and regional priorities can be put off once again. Palestinians can go up for air and breathe again whilst girding themselves for yet another round of Israeli elections over the next four months, which is the cue for Palestinian bashing on steroids.

If the Manama meeting does go ahead, the only rational and sensible posture is a polite thank you for US efforts and a pledge of funds contingent on a host of conditions. Firstly, the plan must include a viable, sovereign independent Palestinian state based on the 1967 lines, perhaps with adjustments for land swaps. Secondly, the state of Palestine must have its capital in Jerusalem, not miles outside it. Thirdly, the Palestinian state must be able to tap into its own resources, including an equitable share of water, and its rightful access to the Dead Sea. Fourthly, the West Bank and Gaza must be linked by a safe passage, as laid out in the Oslo accords.

Israel has a plan, and it may not be far off Kushner’s. It is one based on an ever-hardening national consensus that will flourish regardless of who triumphs in the elections. It is this plan that is being implemented. It involves the destruction of Palestinian dreams under a sea of settlement concrete and stone. These continue as per usual, with yet another round of units announced for the Pisgat Ze’ev and Ramot settlements in East Jerusalem — the largest since 2014, according to Peace Now. All of this will be “legalized” through the annexation of the prime bits of the West Bank, if not all of it.

It involves the eternal division of the West Bank from the Gaza Strip. Water and other resources will remain as they are now: Under Israeli control. Palestinian refugees can dream of returning whilst living the nightmare of exile. The Trump administration is even reported to be trying to persuade Lebanon to grant Palestinian refugees citizenship. While Lebanon may desire investment, assistance and a deal on its own land and sea borders with Israel, this might be a step too far.

Rumors abound that other regional countries have been asked to play a role in contributing land for a Palestinian state. This envisages Jordan giving some and receiving some Saudi Arabian land in return. Saudi would get some Egyptian. As for Gaza, Egyptian diplomats strenuously deny that they will agree to any transfer of land from the Sinai to Gaza.

If Trump had been serious about finding peace between Israelis and Palestinians, he would not have set fire to the region by recognizing Jerusalem as Israel’s capital. Would he have further eroded Palestinian trust by defunding UNRWA and hospitals in East Jerusalem? Would he have closed the Palestine Liberation Organization office in Washington? Of course not.

Trump’s priority is to keep his base and key supporters happy. In this he has succeeded. The pro-Israeli Christian far right is delighted with his hard-line stance. Sheldon Adelson must also be thrilled and may therefore not support any Republican rival to Trump in 2020. It may be that another shot at the holy grail of Middle East peace will have to wait until after those elections.