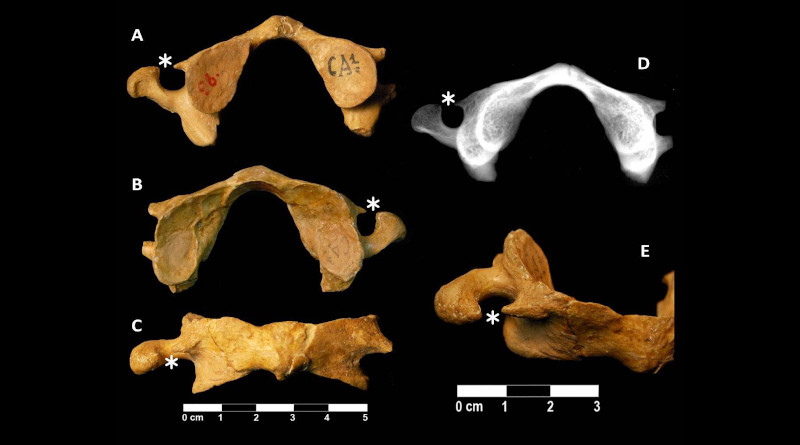 What caused the disappearance of the Homo Neanderthalensis, a species that seemingly had as many capabilities as the Homo Sapiens? There are several theories that attempt to explain it: the climate, competition with the Homo Sapiens, low genetic diversity.

A study that Valencia University (UV) participates in has analysed the first cervical vertebra from several Neanderthals and confirms that the genetic diversity of the population was low, which hindered their ability to adapt to possible changes to their surroundings and, therefore, their survival. The study has been published in the ‘Journal of Anatomy’.

Professor Juan Alberto Sanchis Gimeno, from the Department of Human Anatomy and Embryology at the Faculty of Medicine and Dentistry of the UV, the National Museum of Natural Sciences (MNCN-CSIC) and the National Centre of Research on Human Evolution (CENIEH) all took part in the study. Three vertebrae from the Kaprina (Croatia) site have been analysed, and material from other sites has been revised.

In Homo Sapiens, the anatomic variants of the atlas have been thoroughly studied in recent years. In the case of modern humans, the atlas shows anatomic variants in almost 30% of cases. “However, probably due to the bad preservation of this cervical vertebra and the limited material recovered in the fossil register, the atlas of Neanderthals have been looked at this way,” explains UV professor Juan Alberto Sanchis Gimeno.

Recently, researchers from the Palaeoanthropology Group of the MNCN established the presence of several anatomic variants in the atlases of Neanderthals of the El Sidrón (Asturias) site. With the objective of confirming the high prevalence of the anatomic variants of this species, the fossil atlases of Neanderthals from the Krapina (Croatia) site have been thoroughly analysed. “Krapina is a site that is around 130,000 years old, compared to the 50,000 of El Sidrón. It is the site from where the largest amount of Neanderthal remains have been recovered, which makes it a sample of especial interest for the analysis of the genetic diversity of this species, as all individuals potentially belonged to the same population,” says Daniel García-Martínez, researcher at the CENIEH.

The study of the anatomy of the three atlases recovered at this site has revealed the presence of anatomic variants in two of them (66%). One of them, known as Unclosed Transverse Foramen, UTF, has a prevalence of just 10% in modern humans. “Verifying the presence of these anatomic variants in Krapina, along with the revision of other atlases submitted to the scientific community, which has not been analysed from this viewpoint heretofore and which offers similar data (over 50%), suggest that the amount of variants in Neanderthals is significantly greater than in current humans,” says Palancar. “This data supports the theory that their genetic diversity was very low and confirms that it could have been one of the causes for their disappearance,” concludes MNCN researcher Markus Bastir.