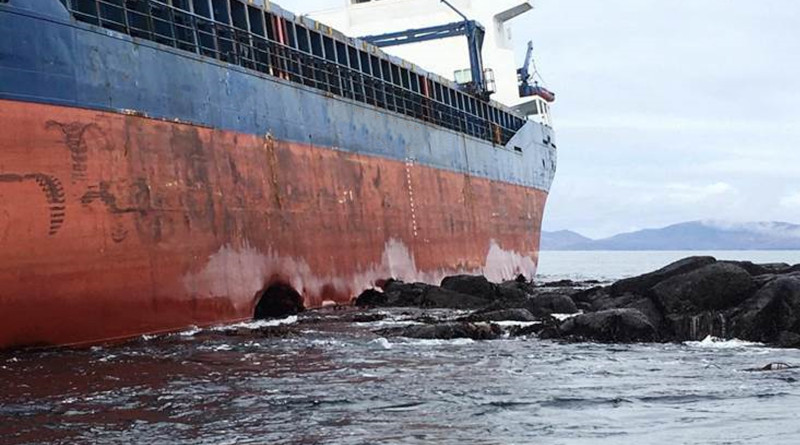 Resolve Marine said that it has successfully refloated the grounded cargo vessel KAAMI completing response operations with her tow to a dry dock in Loch Kishorn Scotland.

What began in the early morning of March 23, 2020 with the grounding of the vessel KAAMI carrying eight crew and 1,900 tons of SRF pellets evolved into a comprehensive response operation requiring patching of raptured cargo holds and ballast tanks, lightering of the cargo, and refloat operations. Despite unpredictable weather conditions off the Isle of Skye, Scotland, and difficult conditions associated with the COVID-19 restrictions, Resolve salvage teams and equipment, mobilized from bases in Europe, Africa, and the United States.

Initial search and rescue efforts by the Maritime and Coastguard Agency (MCA) UK focused on safely evacuating the crew from the stricken vessel. Soon after, a Lloyds Open Form was agreed between Resolve Marine and the vessel’s owners. Storm force conditions prevented Resolve’s salvage team from boarding the vessel but on March 25, 2020, response teams were able to board via helicopter and begin an on-site assessment.

Working closely with the U.K. Secretary of State’s Representative for Maritime Salvage and Intervention (SOSREP), MCA, and owner’s Special Casualty Representative (SCR), a salvage plan was developed to mitigate pollution threats, stabilize the vessel and prepare her for refloating.

The team’s immediate priority was to remove the vessel’s bunkers containing approximately 63 tonnes of fuel. Once the fuels were removed, the team’s attention turned to removing the 1,900 tons of SRF pellets cargo which posed a significant environmental threat.

The KAAMI was grounded on an exposed rock pinnacle that was exposed to strong currents and a five-meter tide difference. As teams boarded the casualty, the tide and current conditions created obstacles allowing a few hours between tides for lightering assets to position alongside the vessel providing an opportunity to remove bunkers and cargo.

After 43 days working in northern Scotland’s unforgiving weather, the Resolve salvage team along with their partners successfully managed to refloat the KAAMI using a combination of salvage patches and compressed air. The vessel was then towed and safely redelivered to Kishorn.

“From the beginning, we knew this response was going to present a host of unique challenges,” saidd Dimitri Theodorou, Resolve’s Director Emergency Response. “From the location and weather to global travel conditions created by the Coronavirus pandemic, the teams focused on personal safety as they executed an urgent response.”