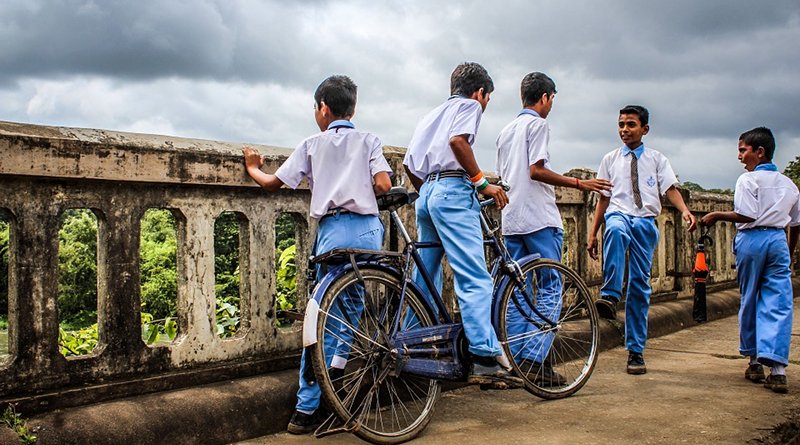 Despite June 1, fixed by the United Nations as the International Children’s Day, primarily to highlight all forms of abuses against children, there are still violations worldwide. The International Committee of the Red Cross (ICRC), one of the global organizations, works closely with children, promotes their fundamental rights in different parts of the world. In this interview, Kester Kenn Klomegah from Eurasia Review talks with Veronika Vybornova, Specialist of Communication Department responsible for historical archives and exhibition projects, Regional Delegation of the International Committee of the Red Cross for the Russian Federation, Belarus and Moldova.

What, in your opinion, are the core values for marking this International Children’s Day, June 1?

There are four core values unpinning International Children’s Day. Firstly, children’s best interests should guide all actions on behalf of children; secondly, because of their age and dependency on adults, children require special care and protection; сhildren are more exposed to a range of risks that can impact their physical and mental well-being for years; and lastly, children living in conflict situations are exposed to a number of risk, such as family separation, which makes them particularly vulnerable.

For ICRC, children make up nearly 40 per cent of the individuals we assist. We work specifically on the protection of children by engaging with weapons bearers on child protection issues, discussing specific measures to prevent international humanitarian law violations – for instance, the prohibition of sexual violence against children and the prohibition of unlawful child recruitment.

In your assessment, have the primary goals (especially basic rights for children) been achieved?

Though progress has been made over the last years to ensure fulfillment of children’s rights as spelt out in the 1989 Convention on the Rights of the Child (the 30th anniversary of which we celebrated last year), a lot remains to be done to protect children’s rights. This is particularly true for children living in conflict-affected countries, where ICRC is mandated to respond.

Children represent an unacceptable proportion of civilian casualties during war. Over the last decade, the number of children wounded or killed in conflict rose by 300 per cent (Save the Children). Children living through war are especially vulnerable to a range of risks that deprive them of the opportunity to fully experience childhood and are all too often drawn into hostilities.

What was the aim of the exhibition held by ICRC, both in St Petersburg and Moscow? Could you describe some the illustrations and photos from different parts of the world?

Since its inception in 1863, the ICRC in collaboration with National Societies of the Red Cross and the Red Crescent across the world has striven to help those affected by war, armed conflicts and other situations of violence. Women and children occupy a special place among its beneficiaries.

The exhibition’s aim was to show that in time of war even the most vulnerable can find hope if they are granted protection, assistance and support. Adversities and privations, which mothers from different countries and continents have had to overcome during wars and armed conflicts in the twentieth and twenty-first centuries, are not the sole focus of unique archival photographs at the exhibition entitled Mother and Child: from the Photo Archive of the International Committee of the Red Cross.

Most of the photos on display for the very first time. Particularly important photographs at this exhibition are those speaking of and showing assistance that can and should be provided to the most vulnerable and helpless.

Some examples – stories based on the photos of the exhibition:

During the Spanish Civil War, apart from other problems, there was an urgent need to evacuate lots and lots of children suffering on both sides. In 1937 the global evacuation of Spanish children to different countries started, facilitated by many governments, National Societies and the ICRC. The ICRC directly supported the biggest group of Spanish children evacuated to France – over 20,000. Those were children from the Basque Provinces, Asturias, Cantabria and Madrid. Generally, they would arrive at Bordeaux, where a certain number of the children were transferred to Soviet ships (such as ‘Felix Dzerzhinsky’,’ Maria Ulyanova’ or ‘Kooperatsiya’) and then sent to the USSR. The others were dispersed across the entire France to be taken care of by families or to live in camps that were set up speciﬁcally to assist them. Along with the Soviet Union, Spanish children were accommodated in other countries: 5,000 in Belgium, 4,000 in the UK, and, to a lesser extent, in Switzerland (800), Mexico (455) and Denmark (100). Thus, the evacuation of Spanish children, saving them from the horrors of war, was a largescale humanitarian operation that brought together many countries.

-Humanitarian activities during famine in Greece in the Second World War

In Greece, caught in a blockade, famine reigned. As some sources indicated, in the winter of 1941-1942, 100 thousand Greeks died by starvation. In total, over the years of occupation, 300 thousand died of hunger. Hunger killed at least 5% of the Greek population: most of these people did not die of malnutrition-related diseases, but rather from starvation. The ICRC delegate Marcel Junot traveled to Greece to assess the situation on the spot. He wrote about this later in his book “Warrior Without Weapons: “During that terrible winter of 1941, we managed to give out about 800 thousand servings of free soup; in 450 canteens, 100 thousand children over seven years of age received food, 130 milk cuisines for 74 babies were organized.” In addition, Dr. Junot managed to organize the sending of sick Greek children for treatment in Cairo.

After the war the International Committee of the Red Cross was associated, so far as its resources allowed, with the highly praiseworthy efforts made to reunite children and parents who had lost touch with each other. Some success was achieved in the face of great difficulties. The International Committee of the Red Cross again incorporated a certain number of provisions relating to preferential treatment for children in its draft Civilians’ Convention. These provisions were approved by the XVIIth International Red Cross Conference in 1948 and were later adopted without any substantial amendment by the Diplomatic Conference of 1949. In addition to the Article 24 , Articles 14 , 16, 23, 38, 50, 51 and 68 of the Forth Convention make provision for special measures in favor of children.

What are the existing problems and challenges, and how these differ in various regions, say Eastern and Central Europe where in Russia is located, in Asia and Africa?

The ICRC is primarily concerned with countries affected by war. Our concerns for children living in conflict-affected countries are many. Children suffer in armed conflicts in a number of ways: they might be separated from their families, detained, recruited or used by armed parties in conflict regions. There were many cases children were forcibly driven from their homes, killed, injured, sexually abused or exploited in other ways.

Beyond the direct impact of war, which might maim and kill children, the indirect consequences of armed conflict (lack of food, clean water and health care) have a particularly strong and devastating impact on children. Too many children die of preventable illnesses, malnutrition, or lack of safe shelter. A striking example, children living in countries affected by protracted conflicts are five times more likely to die from water-borne disease than from the direct damage inflicted by bullets or bombs (UNICEF 2019).

In times of war, children may be displaced from their homes, either within the same country or across an international border, often with serious consequences for their physical and psychological well-being. During flight, in particular when it is sudden, children are vulnerable to be separated from their families. Many go missing or die during perilous journeys, whether by land or by sea.

Another pressing issue that the ICRC observes today is the need to ensure that children caught up in conflict have access to education. Education is, rapidly and profoundly disrupted in armed conflict. Education systems – potentially under-resourced to begin with- are placed under severe additional strain.

Do you also suggest the official policies could play a role in improving and securing the rights for today’s children? What should states and governments do, generally, to support children?

Most suffering endured by children during armed conflict could be prevented or alleviated if there was greater respect for existing international law. The legal and policy frameworks exist, they are strong, yet there is a need for greater commitment and political will for their implementation. Children affected by armed conflict are entitled to the general protection afforded to civilians as well as to special respect and protection. We all need to work together to make protections that exist on paper translate into children’s daily lives – we all must hold each other to account when we see children in conflict be forgotten.