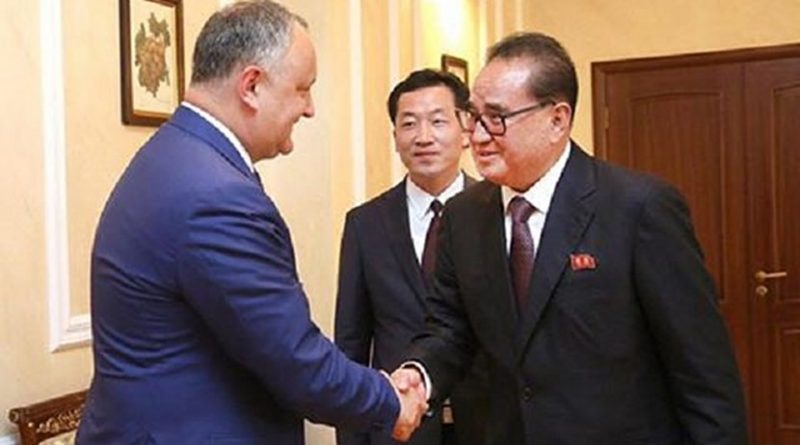 Foes of Moldovan President Igor Dodon have condemned him for welcoming a North Korean delegation on Saturday, reminding him that he is supposed to uphold Europe’s democratic values.

Moldova’s pro-Russian president Igor Dodon drew sharp criticism from his foes after receiving an official delegation of the North Korean Worker’s Party on Saturday, which came to participate in the 20th anniversary festivities of the Moldovan Socialist Party.

Dodon met all ten foreign delegations that participated in the Socialist celebration on July 1 and posted thanks on his Facebook fan page after receiving Hungarian, Turkish, Russia and North Korean officials.

North Korea was represented by the vice-president of the Central Committee of the Workers’ Party Ri Su Yong, who is also head of the Diplomacy Committee of the North Korean Parliament and was Foreign Minister from April 2014 to May 2016.

“[North] Korea has an enormous potential to develop commercial relations,” Dodon wrote on his Facebook fan page. “They are interested in several categories of Moldovan agricultural products, especially Moldovan wine, and the first batches of Moldovan wine will shortly be exported to this country,” the President explained.

He told readers of his posts that he had reminded the North Koreans that Moldova wishes to cooperate equally with both East and West. “We’ll make efforts to establish an efficient dialogue,” Dodon concluded.

Dodon’s critics were not impressed by these diplomatic gestures, however, pointing out that North Korea is a police state with one of the worst human rights records in the world.

The vice-president of parliament, Iurie Leanca, said it was time to limit the President’s prerogatives in foreign policy.

“Comrade Dodon, please stop! It’s time to become civilized and think maturely!” he said. “We are in Europe, we’re supposed to be Europeans, where the values of democracy are at the basis of all states. You cannot legitimize authoritarian regimes like North Korea!” Leaca said.

Relations between Dodon’s Socialists and the Worker’s Party in North Korea warmed in December 2016, when a delegation from Pyongyang was present at the Socialists’ 14th Congress in Chisinau.

A press release on the Moldovan party website said that was when the North Koreans invited a delegation of Moldovan Socialists to visit Pyongyang.

On April 15, 2017 a delegation duly visited North Korea and was received by the President of the Presidium of the Supreme People’s Assembly of North Korea, Kim Yong Nam. The delegation, headed by MP Grigore Novac, also participated in a parade dedicated to former North Korean leader Kim Il Sung.

Dodon’s spokesman, Ion Ceban, defended the visit at the time, saying that Moldovan Socialists “take part in all possible visits, starting with the United States and ending with Romania – from Iran to Russia.”

“We’d go to Syria if we were invited,” Ceban said in April.

Dodon is a staunch supporter of Russia and of Russian President Vladimir Putin and has been at the Kremlin leader’s sideat several events, including the May 9 Victory Day parade in Moscow.

The event in Chisinau comes days before Chinese President Xi Jinping is expected to begin an official visit to Moscow, with talks expected to focus on the Korean nuclear stand-off, as both China and Russia grapple with how to respond to the regular missile launches by Pyongyang, and its nuclear tests.

Recent statements from US President Donald Trump, saying that North Korea “is causing tremendous problems and is something that has to be dealt with, [probably] rapidly” have worried China and Russia, who are concerned that tensions on the peninsula could spiral out of control.

They previously indicated that they would support a UN Security Council resolution that would build on last year’s UN vote to tighten some sanctions on Pyongyang.

However, China and Russia will agree to this only if the US and its ally South Korea halt their own military drills and the deployment of the Terminal High Altitude Area Defence THAAD anti-missile system, which Moscow and Bijing suspect could be used to spy on their countries, and not just counter North Korea.