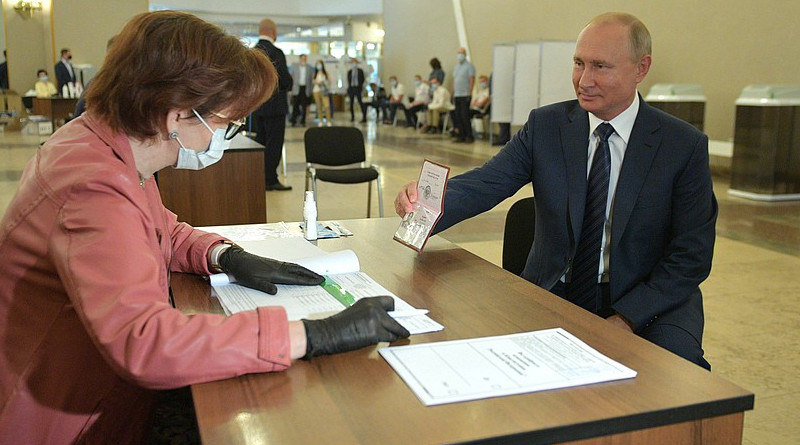 Russia's President Vladimir Putin during the nationwide vote on amendments to the Constitution at the polling station No. 2151 located on the premises of the Russian Academy of Sciences. Photo Credit: Kremlin.ru

Until early 2020, the succession issue in Russia had been a subject of much speculation, as President Vladimir Putin’s term ends in 2024. The results of the 1 July 2020 referendum confirm that he does not intend to withdraw from politics in 2024.

A referendum this week overwhelmingly voted for major constitutional amendments that would, among other things, allow President Vladimir Putin to run again for re-election after he steps down in 2024. If he wins, he can remain in power till 2030; should he run again and succeed in the 2030 elections, he will be in power until 2036, when he must step down.

Most of the amendments revolved around increasing the power of the State Duma in approving the candidacy of the prime minister and his cabinet, as well as making the Russian constitution take precedence over international law. The most significant clause, however, relates to Putin’s political future; it removes the “in-a-row” provision, discounts previous terms in office as president, and nullifies the number of terms served by the incumbent president.

Almost 78% supported the amendment package while a little over 21% voted against it; turnout was 65%. The outcome was expected. If one compares it with his 2018 presidential election victory (68% turnout, 77% of the vote), it shows his widespread popularity has not been as dented as observers had believed.

The clause relating to Putin’s political future was proposed by Valentina Tereshkova, the well-known first woman cosmonaut in space, in an apparent unexpected move in March 2020. When Putin supported her proposal before the State Duma, it laid to rest long-held speculation about his plans for his own political future.

Other noteworthy clauses relate to social welfare: the minimum wage cannot be lower than the subsistence minimum and there is to be regular indexation of pensions. Another significant change is the clause defining marriage as a relationship between a man and a woman.

Indeed, these social welfare clauses are targeted at the majority of Russian voters, given the social protection and guarantees these clauses offer to the majority working class. Moreover, the clause on recognising traditional marriage satisfies the conservative moral values of most voters as well as the powerful Russian Orthodox Church.

Predictably, the State Duma, Federation Council and Constitutional Court approved all the proposed amendments. The whole package of constitutional amendments was to be have been decided upon by a referendum on 22 April 2020; however, it was postponed to 1 July 2020 due to the outbreak of COVID-19 in Russia.

The referendum’s outcome was unlikely to have been manipulated or falsified. Despite the deleterious impact of COVID-19 on the Russian economy, voters are aware of the absence of a real alternative to President Putin in 2024. The clauses relating to social welfare and traditional marriage were key to ensuring that the constitutional amendments would be supported by the majority of voters.

The referendum’s outcome allows President Putin to theoretically run for office again in 2024, for another two terms ─ till 2036. Of late, he has not ruled out running for re-election. A TASS news agency report dated 21 June 2020 quoted him as saying that “I have not made any decision so far. I’m not ruling out that I will stand for [election] if this emerges in the Constitution. We’ll see.”

The report added that he cautioned Russian officials against searching for a successor to him now. “They need to work rather than search for successors,” Putin was quoted as saying.

His purpose in putting forward the constitutional amendments appears therefore not so much to prolong his political future to 2036 but to ensure that he will not be reduced to a lame-duck president, as his comments above show. He has also recently remarked that it was not healthy for Russia to have a system like the Soviet era when leaders died in office.

He has taken this unprecedented step to ensure that he could turn over the reins of power to a hand-picked successor without too much worry, perhaps after re-running and winning the presidency in 2024.

At this point in time, his likely successor remains Prime Minister Mikhail Mishustin.

Mishustin has the technocratic credentials to fully and successfully implement the important National Projects to raise GDP. COVID-19’s negative impact on the economy has placed an additional obstacle on Mishustin but he and his technocratic team are more than competent to handle the challenge.

They have enough resources to manage the adverse impact of COVID-19 on the economy. Russia’s international reserves currently total US$566 billion. It has relatively low foreign debt (about 15% of GDP), and can afford to borrow, if necessary.

Mishutin does not have any known links to Russia’s powerful interest groups such as the siloviki or top security establishment officials and heads of powerful state corporations. President Putin need not balance the interests of these groups; were he a member of either of them, he would have to spend political capital and time on such a task.

Mishutin would not be seen as “old wine in a new bottle” by the electorate. In this regard, he fits the bill of having new faces at the helm of power. A political unknown, he is not considered a threat by either President Putin or the powerful interest groups.

Putin would be more at ease handing over power to Mishutin who would be expected to protect him from any political retribution. (On assuming power, President Putin granted his predecessor total immunity from prosecution. Putin would expect the same treatment from his successor).

But Will President Putin Run Yet Again?

Ultimately, whether Putin runs again for office in 2024 depends on the following factors.

Much would revolve around how the economy develops, and in the immediate term, how Russia manages the COVID-19 crisis and the effects of the oil price fall on its economy.

Should the non-systemic opposition leaders (outside the loyal opposition in the State Duma) become a real alternative to him, then President Putin might be forced to seek re-election. At this stage however, it is unlikely that his political opponents could mount a real challenge. They are not united, lack a coherent policy programme, weakened by official pressure, and do not enjoy widespread popular support.

The state of his health is also a factor; at 67, he is still in fine fettle and can be expected to remain so, given his spartan habits and love for sports. The rise of competent leaders, other than Mishustin, who might prove capable and whom he can trust and elevate, cannot be totally ruled out.

Finally, the state of relations with the European Union and the United States as well as China will be an important consideration. Should these ties enter into a crisis, President Putin would run for re-election.

Only time will tell if he would seek to remain in power till his eighties. He has a keen sense of destiny and would not relinquish power, if doing so would endanger his legacy and Russia’s well-being.

*Chris Cheang is a Senior Fellow with the S. Rajaranam School of International Studies (RSIS), Nanyang Technological University (NTU), Singapore where his focus is on Russia.