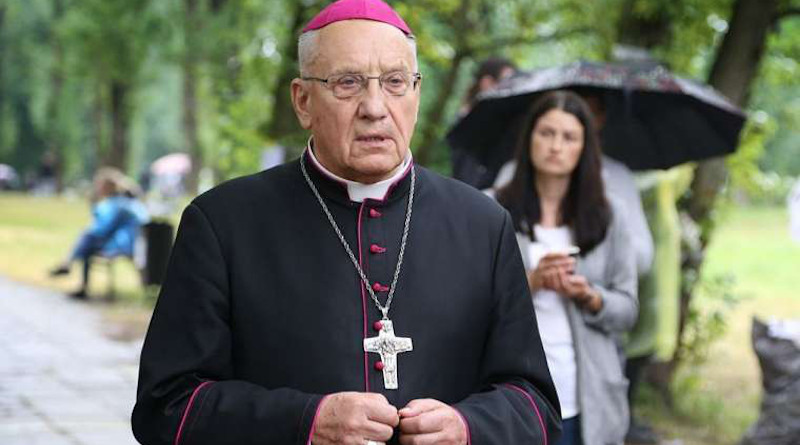 On August 32, Belarusian border guards denied Archbishop Tadeusz Kondrusiewicz, head of the Catholic Church in Belarus, re-entry to his own country. They gave no reason for the decision, the Vicar-General of Minsk-Mogilev Diocese Bishop Yuri Kasabutsky announced. Under Belarus’ Constitution, and its international human rights obligations, the government is not allowed to deny entry to its own citizens.

Archbishop Kondrusiewicz was seeking to return to Minsk after a one-week visit to Poland, travelling in his official car. He tried to cross at the Kuznitsa Belostokskaya Bruzgi border crossing near the city of Grodno when border guards refused him entry. After waiting several hours in vain he returned to Poland, while his driver continued to Minsk in the official car, Catholic spokesperson Fr Yuri Sanko told Radio Free Europe’s Belarusian Service.

“We will protest here and reach out to all Belarus’ government structures,” Fr Sanko added, “because the Catholic Church of Belarus cannot exist without its leader.”

Fr Sanko confirmed to Forum 18 on 1 September that neither Archbishop Kondrusiewicz nor the Church has received any explanation for the entry denial from the authorities.

The Archbishop sent an inquiry to the State Border Committee, he wrote in a 1 September letter from a parish in the Polish city of Bialystok, where he is having to remain while waiting to re-enter his homeland.

President Aleksandr Lukashenko told journalists that Archbishop Kondrusiewicz is one of a number of people on an entry ban list, which is shared between Belarus and Russia. He claimed the Archbishop had been given “some assignments” at “consultations” in Warsaw before his planned return. He did not explain (see below).

Officials at the border crossing point at Bruzgi, and the State Border Committee and Presidential Administration in Minsk refused to explain to Forum 18 why Archbishop Kondrusiewicz was banned from re-entering his own country and returning to his diocese (see below).

Why the entry ban?

The officer at Kuznitsa Belostokskaya Bruzgi border check point who answered the phone on 1 September said they do not give comments. “You should call the State Border Committee in Minsk for explanations,” he advised Forum 18.

The same day the press secretary of the State Border Committee, Anton Bychkovsky, and the press service of the Presidential Administration similarly refused to comment on the denial of entry to Forum 18.

The phone of the head of the religious affairs department at the Office of the Plenipotentiary for Religious and Ethnic Affairs in Minsk, Andrei Aryaev, went unanswered each time Forum 18 called on 1 September.

It remains unclear if the denial of re-entry to his own country to Archbishop Kondrusiewicz is related to the government crackdown following the disputed 9 August presidential elections. The Archbishop called for fair elections before they took place, and condemned police violence and called for dialogue afterwards. On 21 August he was received by the Interior Minister Yuri Karayev.

Following the blockading of Saints Simon and Helena Church (Red Church) in central Minsk by OMON special forces on 26 August with about 100 anti-government protestors sheltering inside, Archbishop Kondrusiewicz described the 40-minute blockade as “illegal” and called on those responsible to be punished.

Fr Sanko refused to comment on whether political motives were the cause of the entry denial. “We still don’t know the reasons and haven’t received any explanation from the authorities, so it is difficult to make any comments,” he told Forum 18.

Asked about the re-entry denial by journalists on a visit to Baranovichy on 1 September, President Aleksandr Lukashenko said that Archbishop Kondrusiewicz had been included in the entry ban list shared by Belarus and Russia. He claimed that the Archbishop had “unexpectedly” travelled for “consultations” in Warsaw and was returning to Belarus “with some assignments”, according to remarks on the presidential website. Lukashenko did not explain what these alleged “assignments” were or who might have given them to him.

Lukashenko claimed that the Archbishop might have dual citizenship and this information is under investigation.

“It is not only him [on the entry ban list] – he is just the best-known person,” Lukashenko added. “Now we are keeping a very close watch on everyone entering and leaving.”

Asked to confirm this information, Deputy Head of the Interior Ministry’s Citizenship and Migration Department Pavel Khrishchenovich refused to comment. “I do not think anything on this issue,” he told Forum 18 from Minsk on 1 September. “We do not give any consultations.”

Citizen only of Belarus

Archbishop Kondrusiewicz recounted what had happened at the border. “A border guard came up and said that you need to wait in the car as the computer had frozen,” he told news service tut.by from Bialystok on 1 September.

“Well, we sit in the car and wait. Another border guard came up, took our passports, looked at everyone and left. He was gone for a long time. When he returned, he said that there was a problem with the documents, and asked us to move aside. We drove to one side, then another border guard came out and blocked the wheels. We sat and waited, sat for a long time. Then the chief of the crossing point, it seems, came and said that everyone can go, but I cannot.” They gave no reason.

Archbishop Kondrusiewicz was not willing to link the re-entry denial to his criticism of police violence after the disputed election, when he insisted that peaceful solutions must be found. He did not hide his frustration over the uncertainty of his situation after he had made so many efforts in the interests of Belarus.

Diocese to function with absent leader

Fr Sanko pointed out that the barring of the Archbishop’s re-entry to Belarus and to his diocese has dramatic moral repercussions on Catholics. “This is a blow on the Church,” he lamented to Forum 18.

However, Fr Sanko added that the diocese continues to function, with the Archbishop staying in contact by phone and e-mail from Poland.

“The ban on entry to Belarus,” Archbishop Kondrusiewicz wrote from Bialystok on 1 September, “obstructs me from carrying out my pastoral service and participation in planned church events as ordinary of the Minsk-Mogilev Archdiocese and chair of the Conference of Catholic Bishops of Belarus.”

Article 3 of the Law on Exit and Entry for Belarusian Citizens includes the provision: “The right of a citizen to enter the Republic of Belarus cannot be restricted.”

Several international human rights agreements to which Belarus is party forbid the banning of citizens from returning to their own country.

Catholic spokesperson Fr Sanko commented to Forum 18 that there have been no similar cases in the world when a citizen was not allowed to his own country.

The Belarusian authorities have frequently rejected requests by Catholic diocesan bishops for foreign clergy (mostly from Poland) to be able to continue serving in local churches. Officials have also rejected petitions by the ousted priests’ parishioners.

In November 2018, Plenipotentiary for Religious and Ethnic Affairs Leonid Gulyako refused Bishop Oleg Butkevich’s request to extend permission for Polish Catholic priest Fr Pawel Knurek to continue religious service at the cathedral parish of the Merciful Jesus in the north-eastern city of Vitebsk. The priest had to leave Belarus after 15 years’ service. Gulyako refused Bishop Butkevich’s continuing appeals in January 2019, as well as a petition by parishioners.

At the beginning of 2019, Plenipotentiary Gulyako banned another Polish Catholic priest, Fr Sobieslaw Tomala, from continuing to serve in St Francis Church in Soligorsk in Minsk Diocese. However, he later changed his mind and allowed him to continue to serve.

Plenipotentiary Gulyako has similarly refused permission for many Russian Orthodox priests from Russia to continue serving in Belarus.

Home » Belarus: Archbishop Kondrusiewicz Barred From Returning To His Own Country