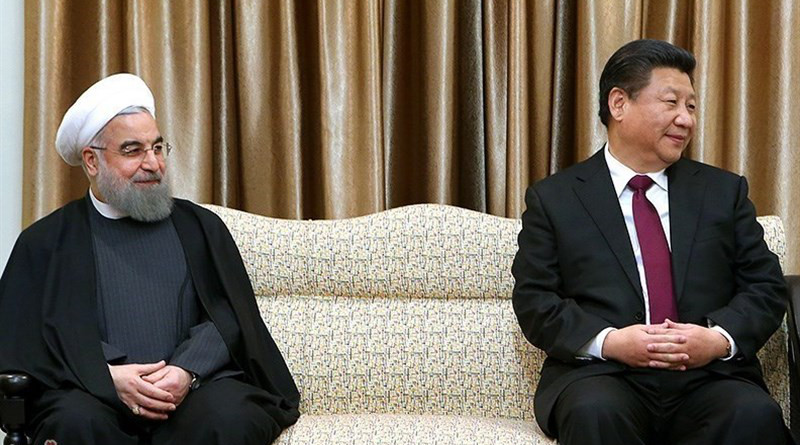 China-Iran Strategic Partnership Agreement whose Draft was leaked in public domain some weeks back may appear at first sight to be a game-changer  in Middle East geopolitics  but when analysed minutely it appears to be beset with innumerable geopolitical imponderables which could weigh heavily against it in its end-game success intended by China and Iran.

Contextually, this Draft Agreement which has yet to be ratified by Iran’s Parliament perceptionaly appears as a compulsive geopolitical reaction by an economically weakened Iran groaning under global economic sanctions and an increasingly diplomatically isolated China over global spread of China Wuhan Virus19 Pandemic originating from China by default or design.

Thus it is a compulsive strategic marriage of convenience between a major regional power of the Middle East and a China with pretentions of emerging as a Superpower engaged in undermining United States national security interests in all critical regions around the globe. Need it be emphasised that in 2020 both China and Iran are in intense adversarial stances against the United States.

Iran may be desperately in need of financial infusions currently with no other source to tap but China. China exploiting Iran’s economic stagnation and dire financial situation worsened by falling oil prices like in case of its other Belt and Road strategy targeted economically weakened nations like Si Lanka and Pakistan moved in for the kill with Iranian strategic quid pro quos in mind .

China in the past right from the 1990s has displayed the propensity for initiating strategic frays in the Middle East whenever cornered by the United States in the Western Pacific especially over Taiwan. In those years it started getting Chinese Silkworm Ant-ship missiles for Iranian coastal defences in the Gulf.

In 2020 China is once again cornered by United States in Western Pacific over Taiwan, Hong Kong and the South China Sea .I would like to see China’s upgrading its strategic relations with Iran in 2020 as diplomatic signalling once again to United States that China can also complicate the complex Middle East environment for the United States.

Both China and Iran if indulging in political signalling to United States is taken as a given, then the China-Agreement Strategic Agreement may not have a long longevity of the declared 25 years.

The China-Iran Agreement envisages a 25 year span in which China will be committed to investing US $ 400 billion in Iran. Of this, $280 billion will flow-in from China to revamping Iran’s petrochemical industrial complex and $120 billion for upgradation and development of Iran’s infrastructure and transportation network.  A Special Economic Zone is also planned to be located in North West Iran with Chinese aid.

China in return for this massive financial outlay in Iran will be granted Iranian oil supplies at some say 32% discounted prices.

Besides the above, the China-Iran Strategic Agreement also incorporates increased defence and security cooperation between the two nations including increased joint military exercises.  The latter would expectedly focus more on China-Iran Naval Exercises and also China’s upgradation of its Ai Defence Grid and coastal defence against any possible US military intervention.

Geopolitically the China-Iran Strategic Partnership Agreement needs to be analysed by an examination of the following questions. (1) Does the reported China-Iran Strategic Agreement have the potential to upset the balance of power in The Gulf? (2) Would China militarily build up war-waging capabilities of Iran substantially? (3) Would the United States be seriously impacted by China-aided enhanced war-waging capabilities? (4) Would Iran with Chinese backing emerge as an overt Middle East nuclear weapons power?

Balance of power in the Middle East has to be viewed in terms of impact of this China-Iran Agreement on other regional powers in contention with Iran like Saudi Arabia and Turkey. On present indications it does not seem so when it is borne in mind that any likely enhancement of Iran’s war-waging capabilities will not be in a short time-span. It will take years and by that time many other imponderables of fast changing Middle East geopolitics could impede the process.

China is unlikely to build Iran’s military capabilities to levels which threaten China’s relationships with other major regional powers. China’s diplomatic and strategic forays in Middle East are not single-country focus but have a multilateral spread. China would hesitate to build Iran as a military threatening power strong enough to raise concerns amongst Gulf Monarchies, especially Saudi Arabia.

The United States with asymmetrical preponderance of military might over China in overall terms and coupled with its linkages to Israel and GCC Monarchies Armed Forces enjoys greater regional support in the Middle East than any evolving China-Iran strategic nexus or China’s build-up of Iranian war-waging capacities.

Both China and Iran also have to factor-in their strategic calculations reactions of Russia to such a China-Iran strategic nexus in the Middle East where Russia has a far bolder strategic signature than China and also that Iran in the past had to depend on Russia for most of its advanced military equipment.

The biggest imponderable which is likely to weigh heavily and influence the longevity of the China-Iran Strategic Agreement of a 25 year span is whether China can sustain and pump-in US 4 400 billion for resuscitating Iran’s petrochemical complex in view of China’s slow-down in economic growth to single digit figures and also the slump in Cinna’s manufacturing industry strengths. China’s current status in terms of similar Agreements with Sri Lanka, Pakistan and elsewhere are stagnating. Somewhere along the way Iran may be forced to do a rethink.

Concluding, it needs to be emphasised that on analysis of all objective factors it seems that Iran is ill-advised to mortgage Iran’s future to a China which is virtually becoming a global outcast especially in Iran’s Indo Pacific neighbourhood next door due to its military adventurism and expansionist impulses. This Agreement with China where Iran will be forced to concede over-sized strategic quid pro quos to China in return for uncertain Chinese financial investments could eventually lead also to Iranian domestic political dissent. The Iranian pubic would be strongly opposed to a China currently engaged in cultural genocide of Iran’s Islamic Brethren in Xinjian.