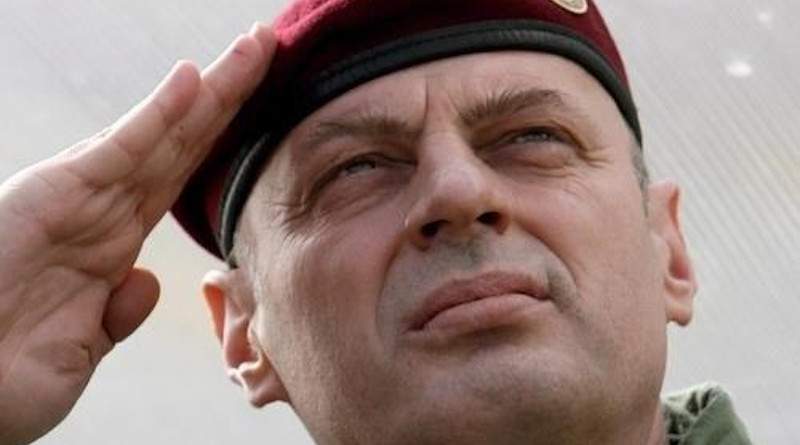 File photo of Agim Çeku, as Minister for the Kosovo Security Force

Former Kosovo Liberation Army commander Agim Ceku, who later became the country’s prime minister, said that he has been summoned by war crimes prosecutors in The Hague for questioning as a suspect.

Agim Ceku told BIRN on Thursday that he has been called for interview this month as a suspect by the Kosovo Specialist Prosecutor’s Office, which is probing wartime and post-war crimes in Kosovo from 1998 to 2000.

“Yes it is true. I was invited to be interviewed as a suspect. I will travel on September 28,” said Ceku, who was Kosovo prime minister from March 2006 until January 2008.

As a former Kosovo Liberation Army commander, Ceku was tried in absentia by Serbia for having command responsibility for the deaths of 669 Serbs and 18 other non-Albanians.

Then Serbian court sentenced him to 20 years in prison in absentia, and Belgrade asked Interpol to issue an international ‘red notice’ for his arrest, which led to Bulgarian officials detaining him and holding him for two days in June 2009.

Ceku was also Kosovo’s Minister of Security Forces from February 2011 until December 2014, when he became deputy prime minister in the government led by Isa Mustafa, the chief of the current main governing party, the Democratic League of Kosovo, LDK.

During the time that Ceku was a minister, he was appointed as the head of the commission tasked with verifying the status of Kosovo Liberation Army veterans in order to enable them to receive welfare payments.

Ceku is the latest high-profile Kosovo politician to be summoned for questioning. In July, Kosovo President Hashim Thaci was quizzed for four days in The Hague. He denied any wrongdoing.

The Specialist Prosecutor’s Office announced in June that it has an unconfirmed indictment charging Thaci, as well as senior Kosovo politician Kadri Veseli and other former Kosovo Liberation Army fighters, with war crimes and crimes against humanity.

Over 100 other former Kosovo Liberation Army fighters have also been interviewed by the Hague prosecutors, who are probing allegations including murder, torture and illegal detentions.

The Kosovo Specialist Chambers and Specialist Prosecutor’s Office are part of Kosovo’s justice system but are located in the Netherlands and staffed by internationals.

They were set up under pressure from Kosovo’s Western allies, who feared that Kosovo’s justice system was not robust enough to try such sensitive cases.

The so-called ‘special court’ is widely resented by Kosovo Albanians who see it as an insult to the KLA’s war for liberation from Serbian rule.