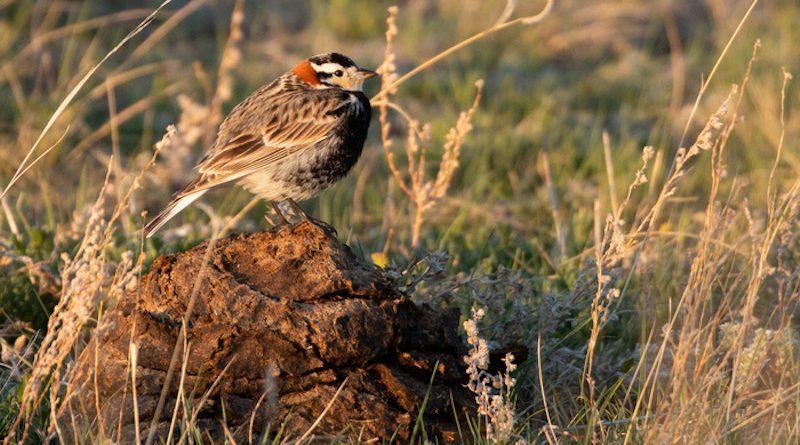 North American grassland bird species, many endemic to the prairie ecosystem, are in decline. Until now, the impact of increasing bison reintroductions as well as cattle and bison grazing on rangelands was largely unknown.

New research shows both cattle and bison grazing are viable options for conserving grassland birds in the prairie landscape. Bison were grazed at low stocking rates year-round with no rotation among pastures, suggesting that bison grazing can maintain bird diversity and achieve the benefits of large herbivore grazing without the intensive management of pasture rotation as needed in cattle.

Despite controversy, year-round bison grazing does not have negative impacts on grassland bird communities and provides additional benefits, above and beyond cattle grazing, for the ecosystem as a whole.

The majority of North America’s grassland birds breed on rangelands occupied by domestic cattle, but reintroductions of bison to restore evolutionary grazing patterns are increasingly common.

Grassland landscapes in western North America have undergone drastic changes since millions of bison occupied this landscape, and the biodiversity effects of bison on modern rangelands remain poorly understood.

The authors compared the effects of 2 different grazing treatments common across the region on avian diversity: seasonally grazed and manually rotated domestic cattle, and year-round, free-moving bison. They also tested whether estimated abundances of 11 grassland/steppe obligate songbirds differ between these two management regimes.

The authors found roughly equivalent bird diversity, as measured by species richness and Shannon’s diversity index, at sites occupied year-round by bison and seasonally by cattle. They also found no significant effect of grazer type on 9 of 11 grassland songbird species. The two exceptions were Grasshopper Sparrow and Vesper Sparrow, which were more abundant in bison pastures.