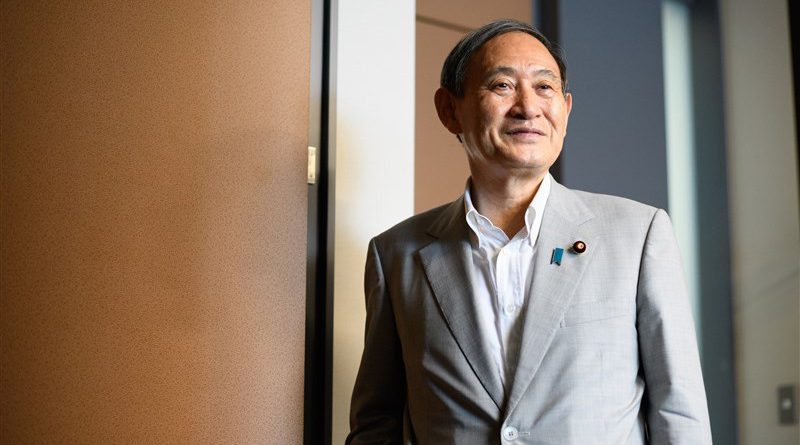 A little more than a year after he stepped out of the shadows of Japanese politics and into the Prime Minister’s office, Yoshihide Suga has announced his intention to step down. For months now, speculation had been rife in the halls of power in Tokyo about the future of Japan’s embattled Prime Minister as Suga stumbled from one political crisis to the other. High profile corruption scandals and the government’s perceived mishandling of the coronavirus crisis proved damaging for the 72-year-old Suga. His sudden resignation, just weeks after announcing his intention to seek the leadership of Japan’s ruling LDP again, has left a wide-open race.

While Suga was renowned as a shrewd and tough political infighter during his time as Shinzo Abe’s chief political fixer and right-hand man, he wore the crown uneasily after ascending to the office of Prime Minister. To begin with, his administration was embroiled in a series of corruption and influence-peddling scandals after it emerged that Suga’s son, an executive at a broadcasting company, wined and dined with top bureaucrats in the Ministry of Communications in a clear violation of political ethics laws. Naturally, questions abound about whether the younger Suga attempted to use his father’s position to secure licenses and other favours from ministry officials. Scant months later, the government found itself in hot water again over its alleged collaboration with major conglomerate Toshiba to frame rules to keep foreign activist investors away from the company. However, in a country that has seen its fair share of robber baron Prime Ministers, Suga’s comparatively tame flirtations with scandal didn’t raise too many eyebrows. His administration’s perceived inability to deal with the COVID-19 pandemic, on the other hand, dealt a crushing blow to his public credibility. Japan’s restrictive vaccine approval rules meant that vaccine rollout started only in February this year, months behind other industrialised economies like the United States. Matters were made worse by a shortage of trained medical professionals who could administer shots to the general public. Japan’s decentralised healthcare system also made it harder for the central government to push a national healthcare strategy onto fiercely independent provincial and local governments. While vaccination rates have gained steam recently, as of September 2, only 47 percent of Japan’s population has been fully vaccinated as compared to the UK’s 63 percent and the US’ 52 percent. This disparity was not lost on Japanese voters, 75 percent of whom thought that Japan’s vaccine rollout was “slow,” while only a fraction (18 percent) said it was “smooth.”

Suga’s predicament was made worse by a series of questionable political decisions. He publicly championed a “Go To Travel” campaign that encouraged the public to venture out of their homes in an attempt to keep the economy running even as the COVID infections raged. Public criticism eventually forced the government to beat an embarrassing retreat. Then came the Tokyo Olympics. Suga pinned his hopes on a successful Olympics to restore his flagging political fortunes. However, this was not to be as many in the public questioned the wisdom of proceeding with an event of such scale given Japan’s then-unvaccinated population and the crushing strain on the public health system. Nevertheless, the government forged ahead but soon had to change tack by banning all spectators from events. Rising infection rates in Tokyo also forced Suga into declaring a fourth state of emergency much to the chagrin of the country’s fatigued population. By this point, a pattern had emerged: The Suga government tended to plunge heedlessly into taking ill-advised public positions before haplessly beating a hasty retreat. This pattern cemented a perception that Japan’s ruling elites had lost the plot. Public anger, which has reached a boiling point in recent months, made itself known in the form of a series of stunning political reversals for the ruling Liberal Democratic Party. In Yokohama, the Prime Minister’s home constituency, Suga’s hand-picked candidate suffered a heavy defeat. Elsewhere, the LDP suffered by-election defeats and was unable to capture a majority in Tokyo’s local government elections. This, combined with the Suga Cabinet’s dangerously l0w public approval ratings, forced many in the LDP to reconsider their choice of leader. This is doubly important given that Japan is heading into a general election in October. The LDP has only lost power twice since the 1950s and most recently in 2009. Then, widespread public anger during the financial crisis at an unpopular LDP government forced the party out of power. The eerie parallels between the party’s unpopularity then and anger at the Suga government now have not been lost on the party’s senior leadership.

The knives were out for Suga as Fumio Kishida, a former Foreign Minister and leader of the LDP, came out of the woodwork to make his claim for the leadership. Other less prominent politicians have also signalled their intent to run. Until this morning, Suga proclaimed his intention to run again for the leadership of his party and even shuffled top level party leaders in an attempt to placate doubts in the party about his ability to lead. It seems that the reservations among the party’s junior and middle ranking members about Suga’s prospects in a general election proved his undoing. On the morning of August 3rd, Suga announced that he wouldn’t seek the LDP leadership for another term. The old King is dead, long live the new King?

While Suga’s resignation has blown the leadership race wide open, three candidates stand out as particularly likely to win the election. To begin with, there is Shigeru Ishiba, Japan’s former Minister of Defence and longtime political heavyweight. Ishiba is a well-known defence hawk and believes Japan should reserve the option to develop nuclear weapons and should acquire an offensive strike capability against foes like North Korea. However, Ishiba lacks a strong political base within the LDP, which was made apparent when he suffered crushing defeats at the hands of Shinzo Abe and Yoshihide Suga in the 2012 and 2020 leadership elections respectively. Following the latter defeat, he publicly resigned as head of his political faction within the LDP; it was a move that signalled that he had called curtains on his career. Scarcely a year later, public polls indicate that Ishiba is one of the top two candidates to succeed Suga. However, he may find the going difficult given his distance from the Abe and Suga factions in the LDP.

Another likely prospect is Japan’s maverick Administrative Reforms Minister, Taro Kono. The son of former LDP leader and Foreign Minister Yohei Kono, Taro Kono is among the most popular serving politicians in the country. His penchant for following the beat of his own drum and advocating for controversial positions within the LDP like the abandonment of nuclear power plants has enabled him to stand out compared to his generally low-key and humdrum political counterparts. Kono is also a close confidant of the current Prime Minister. However, Kono’s path to the top is far from certain. His reputation as a maverick comes with concerns as to whether he can work with the LDP mainstream to build powerful coalitions for reform as Japan’s economy recovers from COVID-19. Kono’s success will also depend on the support of party grandee and former Prime Minister Taro Aso. While Ishiba and Kono are neck and neck at the top of the polls, neither has formally declared an intention to run. Finally, there is Fumio Kishida. While trailing in public polls, Kishida also has a first mover advantage having already declared his candidacy. While his rivals weigh the risks of running, Kishida has been quick off the starting block, proposing a coronavirus recovery plan and moving to consolidate the support he can within the LDP.

As the succession battle plays out, observers of Japanese politics wonder whether the era of revolving door Prime Ministers has returned. Prior to Shinzo Abe’s stable eight-year tenure at the top, Japanese Prime Ministers rose and fell with alarming frequency. This left them little time to focus on revitalising the nation’s flagging economy, dealing with the rising Chinese and North Korean security threat and combating Japan’s rapid demographic decline. If even Suga, well renowned in Japanese circles for his politically savvy and facility for deal making, was unable to hold on in the Kantei for longer than a year, what will the future hold for his successors? Only time will tell.