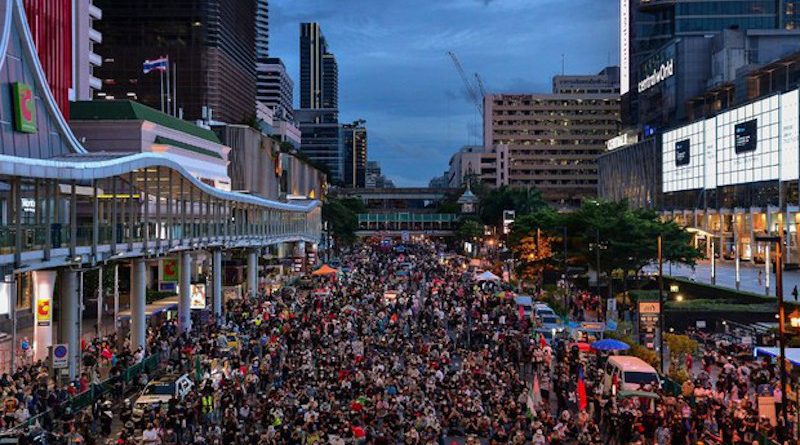 Thousands of protesters took to the streets of Bangkok for a second straight day on Friday to call for the resignation of Thai Prime Minister Prayuth Chan-o-cha, who faces a parliamentary confidence vote this weekend over his handling of the COVID-19 crisis.

The protesters set up a stage at the busy Rajaprasong Intersection in the Thai capital to denounce the government’s handling of the pandemic, as infection numbers continue to rise and only 11 percent of the 66 million population have been fully vaccinated.

“This government came to power unlawfully. It has underperformed [in regard to the] handling of COVID in particular. For our sake, please resign since you have failed to perform,” Nattapon Tulagarund, a 21-year-old university student, told BenarNews.

On Saturday, former army and junta chief Prayuth is expected to face a no-confidence vote for the third time in his 29 months as civilian leader. He will likely survive the test again because his coalition has enough seats in the parliament.

When asked who he wished could replace Prayuth, Nattapon said: “I have no specific choice but just let him be gone, rewrite the constitution, reform the monarchy and the armed forces to make the country democratic.”

For more than a year, Prayuth, the 2014 military coup leader who was elected prime minister after nationwide polls in 2019 that many said were rigged to keep the junta in power, has stared down a largely peaceful youth-led movement.

On Friday, a Thai comedian, nicknamed Platu Dokkradone, 44, told BenarNews that the COVID mishandling had caused her economic difficulty.

“I lived without a job for a year. During these most recent five months, I had some gigs, but the prolonged restriction on nightlife venues caused another joblessness.”

On Friday, hundreds of motorbike-riding youngsters gathered at the Din Daeng area in Bangkok and exploded firecrackers and pipe bombs. A deputy national police spokesman said five youngsters were arrested with guns, over 20 rounds of ammunition, and pipe bombs.

Since July, police have issued arrest warrants for 645 protesters, while 388 of them were arrested, Krisana said.

Prayuth, meanwhile, will likely survive the confidence vote on Saturday because he has enough votes in parliament. Of 487 lawmakers eligible to vote, the coalition holds 275 seats, while the opposition has 212.

Also, the leader of the main coalition party affirmed support for Prayuth on Friday.

“If he goes, I will go, too,” Palang Pracharat Party leader Prawit Wongsuwan, who also serves as deputy prime minister, said during a press conference. PPP is Prayuth’s party.

During a no-confidence debate on Friday in parliament, Chaiwut Thanakamanusorn, the digital economy and society minister, accused an opposition party seeking the censure vote as a way to brainwash Thai youths.

“They brainwashed the new generations in order to get rid of something in our country. … I have to protect the monarchy,” he told parliament, referring to the three pillars that many royal supporters say Thailand stands on: Nation, Religion, Monarchy.

“You are the enemy of the new generations so you won’t stay that long because you are hostile to the future,” Rangsiman Rome, a lawmaker with the opposition Move Forward Party, said in rebuttal.

On the second day of the parliamentary debate, Prayuth said he would not step down.

“I am affirmed here. I would not resign, shuffle the cabinet, nor dissolve the parliament,” he told parliament on Wednesday. “There were rumors the prime minister will be voted against; that does not sound what a gentleman would do.”

The government has rejected the opposition’s allegations of corruption, mismanagement and a bungled response to coronavirus pandemic. Since April, Thailand has seen a massive outbreak of the far more contagious Delta variant.

The country has recorded more than 1.2 million confirmed cases and more than 12,300 deaths since the start of the pandemic last year, according to the Center for the COVID-19 Situation Administration (CCSA), a government task force.

Most of the infections and related fatalities have occurred since April 2021.

The government’s reliance on domestic vaccine production by a company owned by the royal family, and which has no previous experience in manufacturing such vaccines, has been criticized by many for the failure to curb the pandemic.

Though Prayuth may survive the vote, the pressure on him from Thailand’s emboldened young protesters will not go away quickly as they have vowed to keep demonstrating until he is ousted.

A rally is planned for Saturday when parliament is due to hold the vote.

“Though the protests could not pressure the government to call it to quit, they one way or another bear fruit in the future,” said Navaporn Sunanlikanon, an academic at Chulalongkorn University.

“But I don’t believe in violence, and the police have to negotiate with the protesters.”