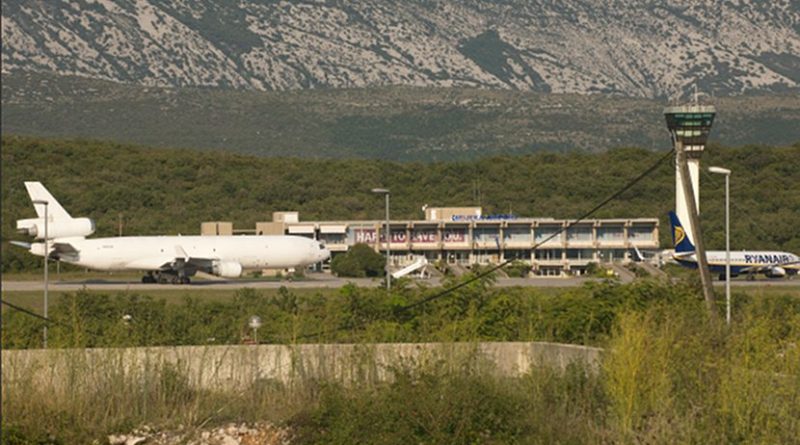 Pentagon commissioned planes carrying military cargo to the Middle East (left) have been sharing a runway with low-cost airlines such as this Ryanair plane. Photo: Nacional (Zagreb)

A small airport on a Croatian island has become an important but unofficial logistical base for Pentagon shipments to the Middle East, likely including arms for Syrian rebels.

Low-cost airlines packed with sun-seekers are the norm for Rijeka airport on the Croatian island of Krk.

But since April, they have been sharing a runway with vast cargo planes carrying munitions and unidentified military supplies for the Pentagon’s wars in the Middle East, the Balkan Investigative Reporting Network has discovered.

Reporters have identified 14 cargo flights in the past six months carrying, or probably carrying, Eastern Bloc-style weapons and ammunition for the US military.

Air traffic control at Rijeka declined to comment on the planes’ cargo, but admitted that there had been “many more” of these types of flights this year.

The upsurge appears to be the result of the Pentagon’s decision to switch its arms supply-line route to Syria away from Germany.

Since April, ten flights have been operated by Pentagon-commissioned air carriers between Rijeka and the US’s airbase in Qatar, Al Udeid Air Base, with the last taking off on September 25.

Each used a specific call-sign, ‘CMB’, given to cargo flights chartered by the Pentagon . Before landing in Rijeka, the planes used a commercial flight number, indicating that the military cargo was picked up in Croatia.

Evidence collected by BIRN suggests the cargo is likely to have been former Eastern Bloc countries’ arms destined for the Middle East.

Qatar has not been named as an official hub for the Pentagon’s programme of arming anti-ISIS fighters, but is listed as the headquarters for US air operations for Syria, Iraq and Afghanistan.

Flight records also show that Pentagon-commissioned cargo planes regularly transport military supplies between Qatar and Kuwait, one of the depots for weapons destined for Syrian rebels.

In June and July, another four flights to Rijeka were carried out by the Azerbaijan airlines Silk Way, which runs a fleet of giant, Russian-built Ilyushin-76 aircraft.

Leaked documents from the cargo carrier reveal that these aircraft delivered ammunition for Soviet-style weapons from Azerbaijan to the Croatian coast on behalf of the Pentagon’s Special Operations Command, SOCOM.

SOCOM, a secretive branch of the US military, buys equipment for anti-ISIS rebels in Syria, as well as other sensitive partners. It is a key player in funnelling up to $2.2 billion of arms to Syrian fighters from former Eastern Bloc countries.

Rijeka’s transformation into a hub for military flights came after the US stopped supplying former Eastern Bloc arms to Syria through military bases in Germany.

As BIRN previously reported, leaked emails obtained by reporters reveal that in December 2016, the Pentagon ordered its contractors working on the supply-line to stop trucking weapons to US army bases in Germany because Berlin had become “very sensitive” about the deliveries.

The Pentagon has refused to confirm that its contractors used Germany for the transfer of military equipment to Syria.

But information published by the Federal Procurement Data System, an online library of US official spending, provides further evidence that the Pentagon did use German bases, as well as proof that weapons to Syria were shipped through Croatia.

According to the document, which was found in the online library by BIRN’s reporters, the Pentagon ordered nearly $16 million of Bulgarian ammunition for Iraq and Syrian fighters in September 2016.

In April 2017, this order was amended to reveal that the delivery point, which had not previously been disclosed, had been switched from Germany to Croatia.

The arrival of the cargo flights on the Croatian island of Krk also coincides with the first Pentagon contract in a decade with Alan Agency, the Croatian state-owned arms broker. The Pentagon signed a deal worth up to $12.4 million for former Eastern Bloc weapons in April. When asked by BIRN about the final destination of these weapons, Alan Agency rejected any suggestion of impropriety.

“We strongly deny all conclusions and assumptions from your messages,” the agency said.

The Croatian government and the Pentagon did not respond to requests for a comment on Rijeka’s use as a hub for military flights. (Croatia’s ministry of defence and foreign affairs and aviation authority did not respond, while the Ministry of Trade said the information was confidential.)

Damir Ruzic, the head of air traffic at Rijeka airport, said: “There are reasons why those planes are coming here. Rijeka airport is not the one who is dragging them here.”

Ruzic added that he had not received any complaints about the increase in large cargo flights.

But Almira Brtan, who rents out holiday apartments near the airport, described how some of her guests thought that “a war is starting” when the cargo planes, such as the giant Ilyushin-76, flew overhead.

“They jump around so we need to calm them down and explain that those are airplanes,” Brtan said.

“People on the beach get up from the towels to see what is happening as it looks like planes are about to land on their heads. Local people react to those big ones now as they are really noisy,” she added.

A public prosecutor in Germany has announced that he will carry out a preliminary investigation into whether the Pentagon broke the law by sending weapons to Syrian rebels through its German airbases without the correct documentation.

The move follows the publication of an investigation by the Balkan Investigative Reporting Network, the Organized Crime and Corruption Reporting Project and Süddeutsche Zeitung in September.

German law, based on the EU’s common position on arms exports, dictates that licences to transport weapons must be accompanied by end user certificates which state the final destination of the shipment and who will be using the equipment.

BIRN asked officials in Zagreb why Croatia was willing to accept Syria-bound weapons that the Germans had refused, despite the fact both capitals followed the same EU-wide regulations, but received no answer.

It is not the first time that Zagreb has proved a useful partner to the US efforts in Syria. Croatia was among the first countries to supply weapons to anti-Assad rebels as part of a CIA-led, Saudi-funded pipeline.

In the winter of 2012, dozens of cargo planes, loaded with Saudi-purchased Yugoslav-era weapons and ammunition, began leaving Zagreb for Jordan. Soon after, the first footage emerged of Croatian weapons in use on Syrian battlefield.

Read all the documents used in the investigation at BIRN’s online library BIRN Source.

This investigation is produced by BIRN as a part of Paper Trail to Better Governance project.