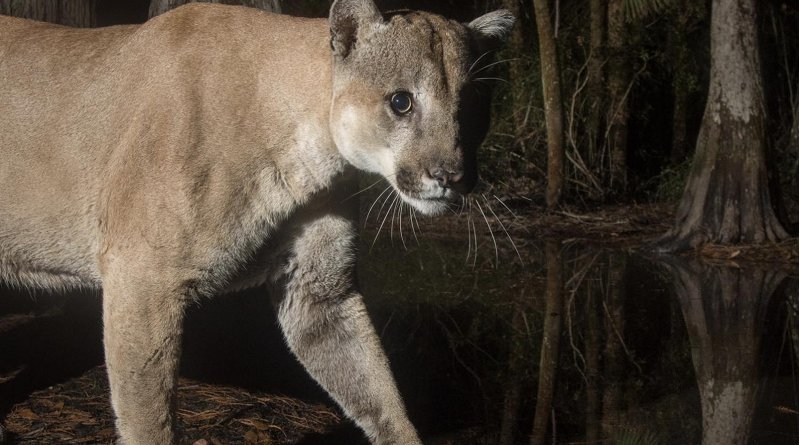 Scientists have pieced together the first complete picture of the Florida panther genome -- work that could serve to protect that endangered population and other endangered species going forward. Credit: Photo courtesy of Carlton Ward Jr. @carltonward

Scientists have pieced together the first complete picture of the Florida panther genome – work that could serve to protect that endangered population and other endangered species going forward.

Florida panthers are the only documented population of pumas (Puma concolor) found east of the Mississippi River.

In the mid-1990s, Florida panthers were facing desperate times. Their small numbers (fewer than 30 in the wild) made inbreeding inevitable and that brought the usual health troubles that emerge when any animals, including humans, mate with partners of a similar genetic background. Heart failure, undescended testicles, pathogenic diseases and parasites were common among the animals. So biologists introduced eight female Texas pumas into South Florida, hoping that genetic variation would help shore up the Florida panthers’ future.

In the new study, researchers used advanced computer techniques to analyze the genomes of Florida panthers, Texas pumas and their offspring to better understand how the mid-1990s introduction program contributed to Florida panthers’ genetic diversity.

Among their findings: Genetic diversity tripled.

“Florida panthers were in trouble because of inbreeding depression. It’s like royalty in human history, where mating with close relatives increases the risk of manifesting harmful DNA mutations and reduces the ability to survive and reproduce,” said lead author Alexander Ochoa, a postdoctoral researcher in the Department of Evolution, Ecology and Organismal Biology at The Ohio State University.

Five of the pumas introduced in the 1990s produced at least 20 offspring. Today, upwards of 230 known individual panthers – many the descendants of this introduction program – roam southern Florida, many in Everglades National Park and Big Cypress National Preserve.

Ochoa and his collaborators examined the DNA of 10 animals – a mixture of Florida panthers and Texas pumas and their immediate offspring. They compared the animals’ genetics, looking for patterns that would tell them what happened during the mixing of the populations.

“This tells us a lot about the genetic underpinnings of this iconic conservation success story. The genetic diversity we found was much greater than some scientists previously thought, and likely contributed to the recovery of Florida panthers after the introduction of the Texas pumas,” Ochoa said.

In the mid-1990s, about 21 percent of Florida panthers had a heart problem called atrial septal defect, and more than 60 percent of the males had undescended testicles, a serious threat to the survival of the population. In recent years, those numbers have dropped to 7 percent and 3 percent respectively.

Ochoa and his colleagues also identified 17 genes that were linked to the refinement of sensory capabilities in pumas, most notably to improved vision. They also found that the number of genes linked to the animals’ sense of smell decreased.

The researchers hope this work will serve to help conservationists understand how genetic diversity can impact at-risk animal populations, and that the genetic details they discovered could potentially help those working in veterinary and human medicine, he said. For the Florida panther population specifically, the genetic blueprint offered in this research could help in the detection of harmful DNA mutations.

“It’s possible you’d want to intervene in a way to decrease the frequency of these mutations so that there isn’t a resurgence of traits that are harmful to the population,” Ochoa said.

His next study will focus on the specific contributions of the Texas pumas to the Florida panther gene pool, work that should clarify which introduced genes were beneficial and detrimental to the population.

“Introducing Texas pumas made sense as they were geographically the closest living population of pumas and they carried potential for restoring Florida panther genetic variation, but this activity also could have presented some risks due to the mixing of individuals with adaptations to particular environments. We want to better understand what happened to the Florida panthers on a genetic level.”

Home » How The Texas Puma Saved The Florida Panther