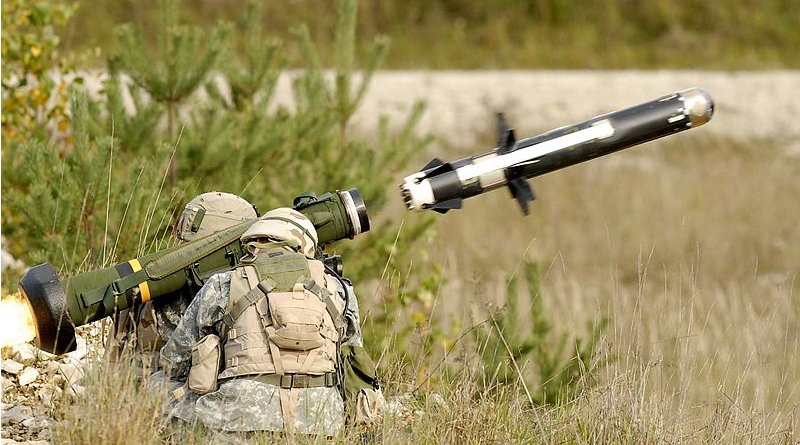 (RFE/RL) — The U.S. State Department has approved a $39.2 million of military equipment to Ukraine, including a second batch of the world’s deadliest antitank missiles to help Kyiv defend itself against Russia-backed separatists.

The deal approved on approved on October 3 includes 150 Javelin missiles and 10 launch units and adds to the 210 missiles and 37 launchers that Ukraine bought from the United States in April 2018.

The Javelin missile systems are meant to be used in the event of a large-scale escalation in the war and not for offensive purposes, U.S. and Ukrainian officials have said.

“The Javelin system will help Ukraine build its long-term defense capacity to defend its sovereignty and territorial integrity in order to meet its national defense requirements,” State Department said in a notice to Congress.

The latest sale must still be approved by Congress, where support for Ukraine remains strong and where initial approval was earlier given for the sale.

Russia’s Foreign Ministry said the Javelin deal will not help Ukraine’s defense capabilities but will dent the country’s budget.

“What Ukraine really needs today is a settlement of the internal Ukrainian conflict, an end to the crisis in many fields, a better situation in the economy and struggle against corruption, the harmonization of internal political processes and the search for identity,” spokeswoman Maria Zakharova told a news briefing on October 3.

The Javelin missiles were mentioned in a controversial July 25 phone call between President Donald Trump and Ukrainian leader Volodymyr Zelenskiy that has become the focus of an impeachment inquiry against Trump by Democratic lawmakers.

After Zelenskiy said he wanted “to buy more Javelins,” Trump responded by asking him for a “favor, though.” The sale of the Javelins had been finalized before the call.

The Ukrainian government has been fighting Russia-backed separatists in eastern Ukraine since 2014 in a conflict that has killed more than 13,000 people. Russia also seized and annexed Ukraine’s Crimea region in the same year.

The United States and European Union have been providing aid to Ukraine since the 2014 Russian invasion.

U.S. Air Force General Tod Wolters, the supreme allied commander, told reporters on October 3 that he supports sending additional Javelins to Ukraine beyond those already in the agreed upon.

The Javelins, manufactured in a joint venture by Raytheon and Lockheed Martin, are medium-range antitank guided missiles that are currently being used by the U.S. military in Afghanistan.