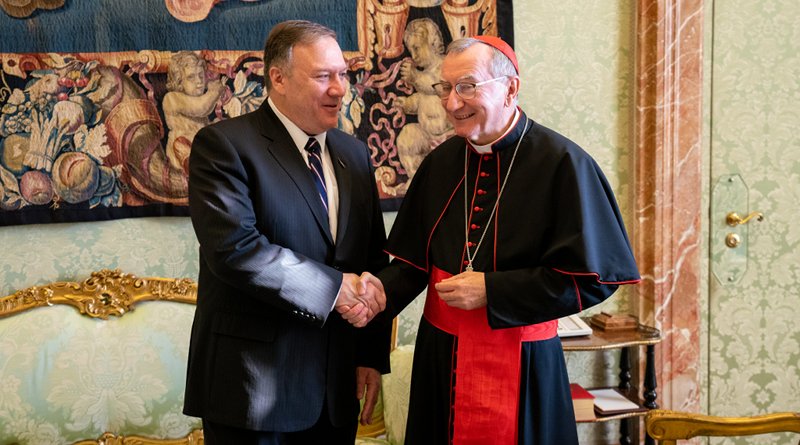 Vatican Secretary of State Cardinal Pietro Parolin has asserted that the Vatican’s deal with Beijing, due to be renewed in the next three weeks, is still “provisional” and has expressed hope that it will work better in respect to having bishops appointed to a raft of vacant prelatures in Chinese dioceses.

He made the comments on Oct. 1 following a 45-minute meeting in Rome with US Secretary of State Mike Pompeo, who has been highly critical of the September 2018 deal on the appointment of bishops.

The meeting was also attended by Archbishop Paul Gallagher, the Vatican’s secretary for relations with states.

The parties presented their respective positions regarding relations with China “in a respectful, relaxed and cordial environment,” said Matteo Bruni, director of the Holy See’s press office.

They also spoke about some areas of conflict and crisis, particularly in the Caucasus, the Middle East and the Eastern Mediterranean.

Vatican News said that the Holy See, as Cardinal Parolin has repeatedly stated, “intends to propose renewing the agreement, which is still in provisional form. He has emphasized its genuinely pastoral character, which is aimed only at ensuring that the Chinese bishops are in full communion with the Successor of Peter.”

“Each of us is seeking religious freedom and a normal life for the Church. We diverge regarding the method to reach that goal,” Cardinal Parolin said.

To get the deal long desired by the Holy See to bring together the two arms of the Church in China — the official government-sanctioned church and the unofficial underground church frowned upon and harassed by Chinese authorities — Pope Francis lifted the excommunications of seven living bishops and a deceased one who had been ordained without the blessing of the Vatican,

In return, the Chinese Communist Party-controlled Chinese Catholic Patriotic Association (CCPA) was supposed to give its imprimatur to 35 underground bishops appointed by Rome.

But progress has been slow, with only six bishops over the initial two years of the deal approved by Beijing. This has left as many as 30 underground bishops in limbo. Some are particularly strong critics of the Chinese regime and are well past the official retirement age of 75 for bishops. It is unclear how many Chinese dioceses are without bishops and this is further complicated by the fact that the Vatican’s diocesan map differs from that of the CCPA.

Cardinal Parolin expressed the hope that it might work out “better in respect to what has taken place so far and that bishops can be appointed for all vacant dioceses in China.”

Pompeo had hoped to meet with Pope Francis but was rebuffed by the pontiff, whose advisers cited the proximity of the US election as the reason for passing on the meeting.

But Cardinal Parolin later suggested that Pompeo’s searing critique of the Vatican’s dealings with Beijing and its complete silence on China’s human rights abuses, as well as the use of a conservative Catholic publication known for its opposition to Francis, as other reasons.