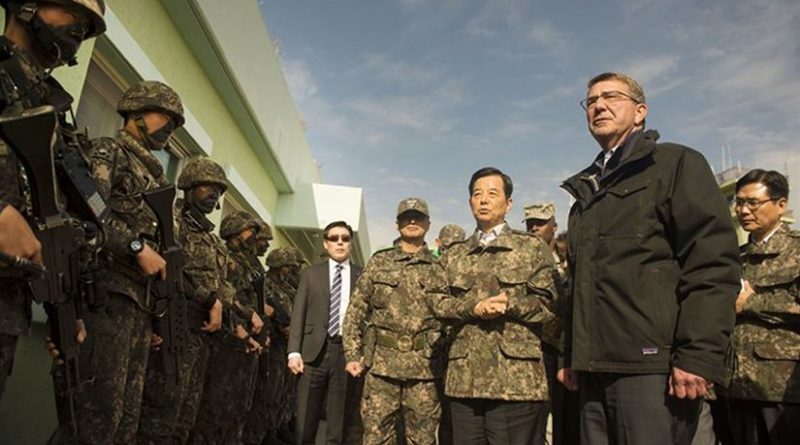 The United States and South Korea have an “iron clad” alliance in the face of the “up close, dangerous” threat of North Korea, US Defense Secretary Ash Carter said yesterday in Seoul.

“Those threats continue to put at risk the peace and security of the peninsula, the region, and the United States,” Carter said.

Carter and Han met for the 47th Republic of Korea and United States Security Consultative Meeting in Seoul.

“Over the years, circumstances may change, and technology may change, but what doesn’t change is our determination to move forward, our partnership to deter and respond to North Korean threats,” Carter said.

The U.S.-South Korea alliance took a “major step forward” during the meeting with the signing of the conditions-based approach to the transition of wartime operational control, Carter said.

He said that approach will ensure South Korean forces have the necessary defensive capabilities to address the North Korean threat. The transfer of wartime control is to happen after South Korea improves in areas including counter-artillery, command and control, and intelligence gathering, he said.

South Korea has maintained peacetime control of its military since 1994, but those forces would fall under U.S. command if hostilities broke out on the peninsula.

South Korea was scheduled to take wartime control by the end of 2015, however, that was modified to focus on South Korea achieving critical defensive capabilities against an intensifying North Korean threat.

‘Up Close, Dangerous and Continuing Threat’

Carter said the U.S. and South Korea remain ready to “fight tonight.” The two allies, he said, continue to stand “shoulder to shoulder” in South Korea, where thousands of U.S. troops are stationed.

Carter noted he visited the heavily fortified demilitarized zone between North and South Korea Nov. 1, and on a previous trip saw the Cheonan memorial for the 46 South Korean sailors killed in March, 2010, during a North Korea torpedo attack.

The DMZ and Cheonan attack are “stark reminders that North Korea is an up close, dangerous, and continuing threat to the security of the peninsula and the region,” he said.

Han, through an interpreter, said the close collaboration between the United States and South Korea nations is an “effective and successful deterrence” for further North Korean threats.