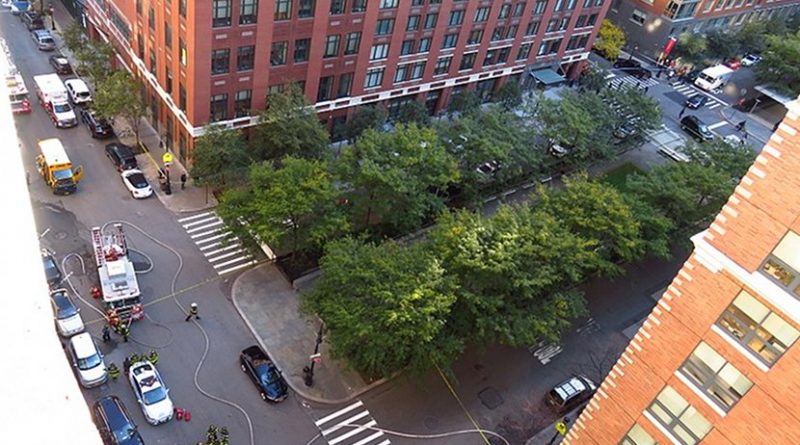 The scene of the 2017 New York City attack approximately an hour after the attack itself happened. The damaged school bus which the attacker's truck crashed into can be seen on the top left. This photo was taken from the 10th floor of Stuyvesant High School. Photo by Gh9449, Wikipedia Commons.

It could not have been scripted better for the demagogues and security hysterics. With the country still grieving in confusion in the aftermath of the Las Vegas slayings, inflicted by an individual who resisted the classification of terrorist at the hands of the Nevada authorities, in came Sayfullo Saipov. Saipov, who fit the fanatic’s bill, the ideologue’s cut, and popular lack of imagination.

He was a profiler’s cartoon inspired dream: menacing beard, smouldering eyes, determined and pious. He came from Uzbekistan, a place many Americans would struggle finding on a map (which “stan” might that be?), but that hardly mattered. He supplied the authorities exactly what they wanted: a speedy, even relieved confession, an expression of unswerving belief, and a sense that he had been planning his attack in New York City for some time.

That attack, it is said, manifested in a form that has become something of a murderous tradition. A space occupied by citizens becomes a death strip for a vehicle speeding and manoeuvring with lethal success. It has also become mandatory for such reports to suggest that things could always have been much worse.

That caveat is always necessary to suggest flaws, chinks in the plan or the means of attack. Saipov, in the aftermath of the Halloween assault, has been portrayed as a fanatic-in-preparation, carrying out trial runs with a rental truck in October, and wondering if he might have used Islamic State flags on the truck while going about his murderous work. (He was not evidently that dazed to think that the gesture might attract attention.)

Nor was Saipov a virgin behind the big wheel: he had been doing tens of thousands of miles from Denver to Detroit, and Canton, Mass. to Salt Lake City on his semi-truck.[1] The New York Times documented the journey of an immigrant rootless and dejected, finding doors to the hotel business closed, and windows shuttered. Anger crept in; tempers grew.

More and more, it started to look as if Islamic State was a convenient conduit, an instructive, and ultimately destructive escape. The BBC suggests that he was “inspired by 90 graphic and violent propaganda videos found on his phone – in particular, one in which IS leader Abu Bakr al-Baghdadi asks what Muslims are doing to avenge deaths in Iraq.”[2]

By the time he had finished with his rented Home Depot truck on a bike lane in lower Manhattan, six had been killed at the scene, with two dying in hospital. Of the twelve injured, four remained in a critical condition. And, claimed an imam in Florida, he “did not learn religion properly. That’s the main disease in the Muslim community.”

If the authorities were delighted by the stereotypical ease in reading the event, and its suspect, President Donald J. Trump was overwhelmed. With a “told you so” pouty menace, he rode over any criticism or perspective that might have qualified any rush to assessments.

From the lowly summit of Twitter came the message that will make any defence lawyer cringe: “NYC terrorist was happy as he asked to hang ISIS flag in his hospital room. He killed 8 people, badly injured 12. SHOULD GET DEATH PENALTY.”

Trump has also stormily attacked the diversity lottery programme, one which Saipov availed himself of in entering the country. For all its curious administrative perversions, the programme supplies a perfect point of difference for those who see the violence inflicted by a bad egg who chooses the US, as opposed to the rotten number born in the land of the free.

The lottery has certainly attracted trenchant critics, among them David Frum. “Good and bad qualities are randomly distributed in the human population, and randomly is how the diversity lottery distributes its rewards.” It also followed, given such a random distribution, that “one member of the class of ’09 proved to be a mass murdering terrorist.”[3] (It is worth noting that such randomness also afflicts local gun-toting fanatics.)

The diversity lottery programme was meant to be a fix, an effort to cope with the effects of the immigration laws adopted in 1965 and the corrective Simpson-Mazzoli Act of 1986. The latter was notable for legalising some 3 million undocumented immigrants in the US, mostly from Mexico.

Others, including Irish Americans, were pegged back in this immigration reform, inspiring then Representative Chuck Schumer and Senator Edward Kennedy to pitch for the lottery as a solution. The beneficiaries, fascinatingly enough, have not followed historical logic, and applications now stem from poor continents, notably Africa.

While Saipov has been appointed standard-bearer for the programme’s problems, Trump’s broader goal is simpler and unrefined. One is to avoid addressing the classic dysfunction of the US psyche in evaluating violence: when done by unhinged locals, a stars and stripes exemption (it’s merely criminal) is granted. If inflicted by the foreign element, terrorism is presumed.

This is clothed in the act of abandoning paralysing political correctness. Focus, he urged his cabinet members, on more aggressive vetting and winding back the lottery. Immigrants are dangerous, even if they are, as Jim Dwyer explains, “no more an existential threat to New York than bicycle paths.”[4]