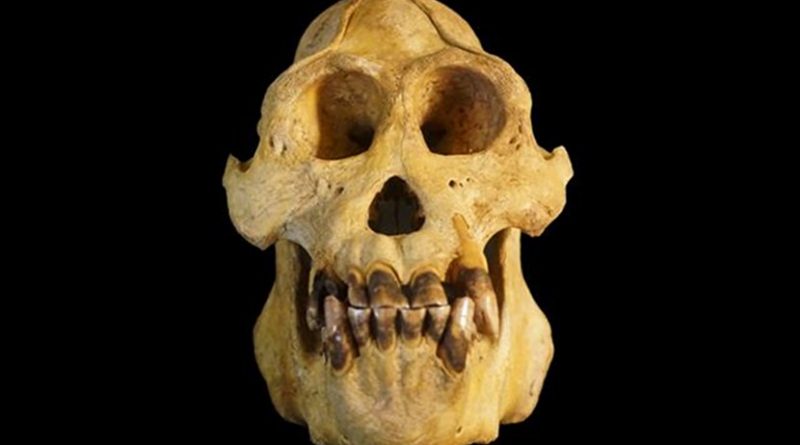 This is a photogrpah of a Pongo tapanuliensis skull. Credit:Nater et al.

Scientists have long recognized six living species of great ape aside from humans: Sumatran and Bornean orangutans, eastern and western gorillas, chimpanzees, and bonobos. But researchers reporting in Current Biology on November 2 have now made it seven, based on a collection of evidence showing that an isolated population of orangutans living in Sumatra is actually its own unique species. They’ve named the new species the Tapanuli orangutan (Pongo tapanuliensis).

Unfortunately, the researchers say, there are only about 800 Tapanuli orangutans left. Those that remain are also under threat from loss of lowland habitat and hunting, which makes this newly discovered species among the most threatened great ape species in the world.

“It isn’t an everyday event that we find a new species of great ape, so indeed the discovery is very exciting,” said Michael Krutzen of the University of Zurich in Switzerland, senior author of the study.

“Great apes are among the best-studied species in the world,” added Erik Meijaard of the Australian National University. “If after 200 years of serious biological research we can still find new species in this group, what does it tell us about all the other stuff that we are overlooking: hidden species, unknown ecological relationships, critical thresholds we shouldn’t cross? Humans are conducting a vast global experiment, but we have near-zero understanding of what impacts this really has, and how it could ultimately undermine our own survival.”

The new orangutan species lives in the Batang Toru area in North Sumatra, Indonesia. While there had been rumors, no one was sure that this population of orangutans existed until 1997. They live south of what had been the known range for Sumatran orangutans.

Earlier studies suggested that the group differed from other orangutans behaviorally and at the genetic level, but it wasn’t clear that those differences were enough to support its designation as a new species. The breakthrough came in 2013, when the research team including Meijaard got access to a skeleton belonging to a Batang Toru orangutan killed in a human-animal conflict. Careful studies of the animal revealed consistent differences in its skull and teeth.

A sophisticated analysis of 37 orangutan genomes now shows that the deepest split in the evolutionary history of living orangutans occurred more than three million years ago, between the Batang Toru population and Bornean orangutans to the north of Lake Toba. Bornean and Sumatran orangutans separated only much later, less than 700,000 years ago. Behavioral and ecological evidence lends further support for the notion that the orangutans living in Batang Toru are a separate species, the researchers said.

“The Batang Toru orangutans appear to be direct descendants of the initial orangutans that had migrated from mainland Asia, and thus constitute the oldest evolutionary line within the genus Pongo,” said Alexander Nater, also of the Unversity of Zurich. “The Batang Toru population was connected to populations to the north until 10,000 or 20,000 years ago, after which it became isolated.”

The findings mean that there are now 800 fewer Sumatran orangutans than previously thought. The Tapanuli orangutans are also severely threatened by hunting and the proposed development of a hydroelectric dam that would flood large parts of their best habitat if implemented. That’s especially discouraging given that previous analyses suggest a mortality rate of less than one percent per year would still be enough to drive the Tapanuli orangutans extinct.

“If even 8 out of 800 animals per annum were killed or otherwise removed from the population, the species might be doomed,” the scientists caution.

The researchers say the most important thing now is to work with organizations already in the area and Indonesian government authorities to urge support for more effective conservation measures to protect the Batang Toru area. They also want to learn more about the relationship of the Tapanuli orangutan to now-extinct orangutan populations that used to live in other parts of Sumatra.