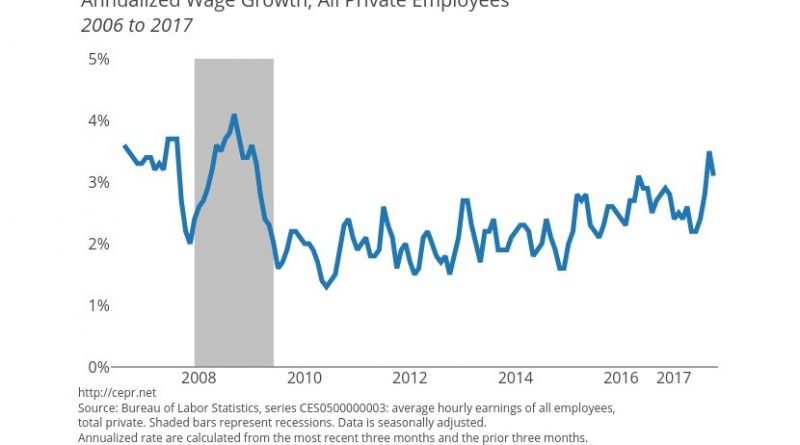 The Labor Department reported the unemployment rate to 4.1 percent in October, another new low for the recovery. The establishment survey showed the economy created 261,000 jobs in the month. The high number is due to a bounce-back from the hurricane-affected growth in September, which has now been revised up to show a small gain of 18,000. The average growth rate for the last three months is 162,000.

The bounce-back from the hurricane also had a large effect on the wage data. Last month’s reported 12-cent gain in average hourly wages was heavily impacted by the hurricane. Many new hires in low-paying jobs did not take place and lower-paid hourly workers likely saw their time on the job reduced, thereby raising the overall average. The October data showed a 1-cent decline in the average wage.

Nonetheless, there has been some recent pick-up in the rate of wage growth. The annualized growth rate, taking the average of the last three months compared with the prior three months, is 3.1 percent, which translates into real wage growth of around 1.0 percent. With productivity growth around 1.0 percent, this implies that workers are getting back some of the ground lost to profits during the recession.

Other data in the household survey are mixed. The fall in the unemployment rate was associated with a drop in labor force participation. The employment-to-population ratio fell by 0.2 percentage points, partly reversing a 0.3 percentage point jump in September. On the other side, there was a sharp drop in involuntary part-time employment to 4,753,000, bringing this measure down to pre-recession levels.

The duration measures of unemployment all fell modestly and are near their lows for the recovery. Another item of good news is a continuing fall in the number of multiple job holders, especially among women. The share of women with multiple jobs stood at 5.2 percent in October, down from 5.8 percent a year ago. Most of the decline was among people where both jobs were part-time. Another positive note is a big increase in self-employment, with incorporated self-employed 467,000 (8.2 percent) above its year-ago level. This is a predicted effect of the Affordable Care Act, as people no longer are dependent on employers or insurance.

On the other side, the share of unemployment due to voluntary quits, a measure of confidence in the labor market, is relatively low at 11.2 percent. It was 12.1 percent a year ago and peaked at more than 15.0 percent in 2000.

The data from the establishment side is a bit difficult to assess since it is skewed by the impact of the hurricanes. Restaurants were the big job gainer for the month, adding 88,500 jobs after losing 98,000 in September. It is likely November hiring will make up for the remaining falloff. Manufacturing continues to add jobs at a respectable pace, gaining 24,000 in October, for a 156,000 year-over-year gain (1.3 percent). Retail lost 8,300 jobs, putting its loss over the last year at 65,000 or 0.4 percent of employment in the sector. Health care employment grew by a modest 21,500, after rising by 19,200 the prior month. By comparison, average growth over the last year has been 25,100 jobs. Temp employment grew by 18,300, somewhat better than its 10,100 average over the last year.

On the whole, this report is consistent with continuing improvement in the labor market. It looks like workers, especially those from disadvantaged groups, are benefitting from increased employment opportunities. Workers are now seeing respectable wage gains that give them their share of productivity growth, but there is little evidence of any serious inflationary pressures that would warrant action from the Fed.