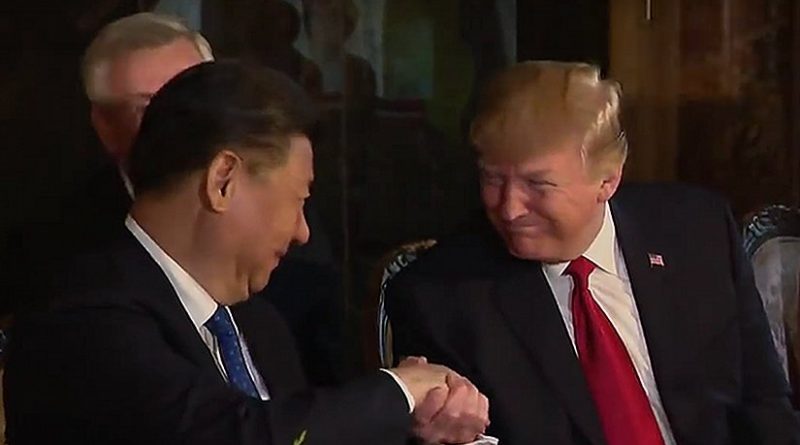 Stock markets in Asia and Europe jumped sharply after Trump and Xi, as leaders of the world’s two biggest economies, agreed Saturday in Argentina to not impose any new tariffs on each other’s exports for the next 90 days while they negotiate a detailed trade agreement.

“My meeting in Argentina with President Xi of China was an extraordinary one,” Trump said on Twitter. “Relations with China have taken a BIG leap forward! Very good things will happen.”

The United States had a $335.4 billion trade deficit with China in 2017. Trump said, however, “We are dealing from great strength, but China likewise has much to gain if and when a deal is completed. Level the field!”

The U.S. leader said U.S. farmers “will be a very BIG and FAST beneficiary of our deal with China. They intend to start purchasing agricultural product immediately. We make the finest and cleanest product in the World, and that is what China wants. Farmers, I LOVE YOU!”

Late Sunday, Trump tweeted that “China has agreed to reduce and remove tariffs on cars coming into China from the U.S. Currently the tariff is 40 percent.” On Monday, however, Kudlow said there was an “assumption” that China would eliminate auto tariffs, not a specific agreement.

Also Monday, China’s ministry of foreign affairs said the Chinese and U.S. presidents had agreed to work toward removing all tariffs.

Trump said he and Xi “are the only two people that can bring about massive and very positive change, on trade and far beyond, between our two great Nations. A solution for North Korea is a great thing for China and ALL!”

Trump, at his political rallies and news conferences, often praises the increase in U.S. military spending during his nearly two years in the White House.

But he tweeted that “at some time in the future,” Xi, Russian President Vladimir Putin of Russia, and he “will start talking about a meaningful halt to what has become a major and uncontrollable Arms Race. The U.S. spent 716 Billion Dollars this year. Crazy!”

The 90-day truce in the escalating trade war between the U.S. and China came during a dinner meeting between the two presidents following the G-20 summit of the world’s biggest economies in Buenos Aires. For months, Trump and Xi have engaged in tit-for-tat increases in tariffs on hundreds of billions of dollars of exports flowing between the two countries.

Trump, speaking to reporters on Air Force One after the plane departed Argentina, said his agreement with Xi will go down “as one of the largest deals ever made. … And it’ll have an incredibly positive impact on farming, meaning agriculture, industrial products, computers — every type of product.”

Trump agreed he will leave the tariffs on $200 billion worth of Chinese products at 10 percent, and not raise it to 25 percent as he has threatened to do January 1, according to a White House statement.

“China will agree to purchase a not yet agreed upon, but very substantial, amount of agricultural, energy, industrial and other product from the United States to reduce the trade imbalance between our two countries,” said White House Press Secretary Sarah Sanders. “China has agreed to start purchasing agricultural product from our farmers immediately.”

“Both parties agree that they will endeavor to have this transaction completed within the next 90 days. If at the end of this period of time, the parties are unable to reach an agreement, the 10 percent tariffs will be raised to 25 percent,” the statement said.