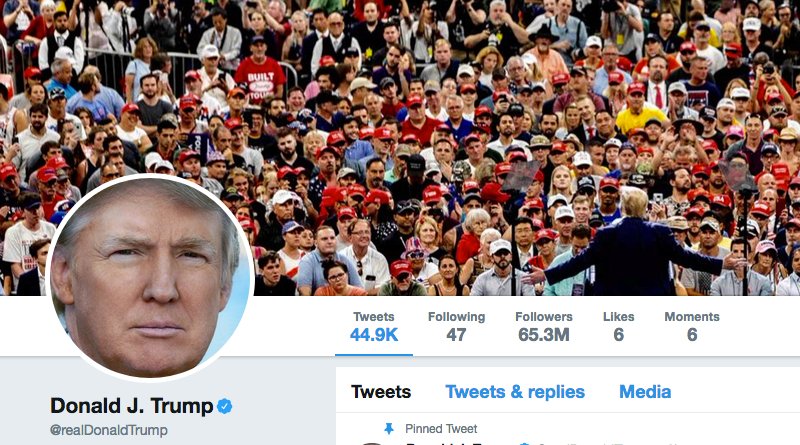 If not for Twitter, US President Donald Trump would not be in the White House today. True/false? That’s for others to judge but it’s probably true, say two Australian linguists who have released a paper analysing Trump’s use of Twitter prior to and six months after his election in 2016.

“In the lead up to his election, Trump engaged a whole new cohort of people who wouldn’t ordinarily be interested in politics,” says Dr Caldwell. “His hashtag, #CrookedHillaryClinton, seared into the American consciousness, casting doubt on Clinton’s honesty, her capacity to lead and her trustworthiness.”

Trump’s use of rhetorical questions, loaded words, capital letters and exclamation marks also saturated the 3000 tweets that the authors analysed between June 2016 and August 2017.

“Twitter lends itself to punchy, emotional statements and suits President Trump’s communication style. Previous research shows that the more negative his tweets are, the higher his poll ratings. Twitter was clearly highly influential for him in winning the 2016 US election,” Dr Caldwell says.

Lead author on the paper, Dr Ross, says Trump’s tweets appealed to his own base and energised his supporters into voting for him. At the same time, his tweets didn’t dissuade his opponents to vote against him in large enough numbers to defeat him.

Unlike Obama, who used a trained media team to tweet on his behalf, Trump won more support by speaking directly to people through his tweets – a factor that worked in his favour.

“Many Americans like the fact that their President bypasses the mainstream media to communicate with them. People are now able to get ‘news’ from the President directly via Twitter and the element of celebrity has undoubtedly worked for him,” Dr Ross says.

There is evidence that Trump’s “de-professional” style is being adopted – albeit a more toned-down version – by some other politicians, Dr Caldwell says, including Australian Prime Minister Scott Morrison who uses more personal and casual language in his tweets than his predecessors.

“There is a more aggressive tone to politics these days and that is reflected in President Trump’s tweets,” Dr Caldwell says.

“When you are so belligerent and direct in your language, people have no choice but to take sides because the platform doesn’t encourage reasoned debate. There is no middle ground. Twitter is combative and that’s what makes it so divisive.”

While Facebook’s popularity is declining, Dr Ross says there is no evidence to show that Twitter is losing ground, particularly as a political communication tool.

“Trump’s constant use of Twitter has created new interest in the platform, with the global economy sometimes hinging on his every tweet,” he says.

“I imagine Twitter will be just as important to Trump – or even more so – in his bid for re-election in 2020 than it was in 2016. Certainly, the Democrats will need a plan of some sort to compete.”

Home » ‘Going Negative’: How Trump Has Changed The Twitter Narrative