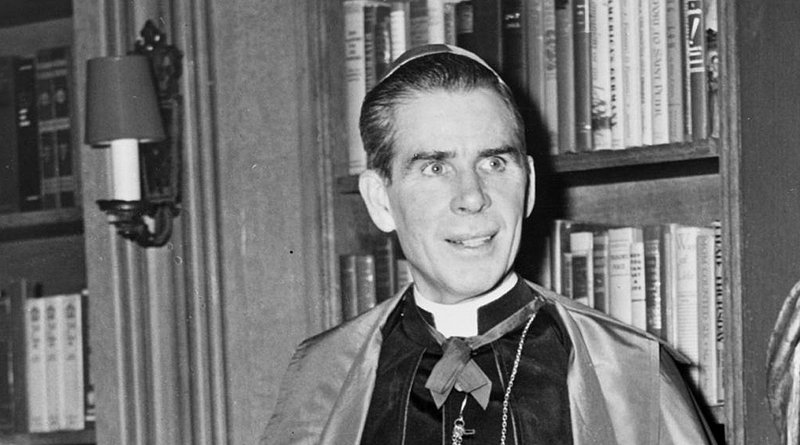 Sheen was due to be beatified at a Mass in Peoria, Illinois Dec. 21. The Diocese of Peoria announced Dec. 3 that the beatification will be delayed, so that more time can be given to examine Sheen’s life.

A source close to the beatification told CNA that the delay is not related a 2007 lawsuit which alleged that while an auxiliary bishop, Sheen walked in on an act of sexual abuse in a New York Church office, “called the victim a sxxx, told the priest to put his pants on, and did nothing to report the incident or comfort the victim. Bishop Sheen covered-up the crime.”

Sheen was an auxiliary bishop in the Archdiocese of New York from 1951 to 1966.

The lawsuit was filed by now-laicized priest Robert Hoatson, who in 2007 was a priest in the Archdiocese of Newark. It catalogs a number of instances of clerical sexual abuse Hoatson claims to have witnessed or heard about. Hoatson said he had learned about a number of those instances of abuse through his ministry of pastoral counseling.

A Church official connected to the beatification told CNA that “the allegation from the U.S. lawsuit has been on the internet for ten years. Every thing said of Sheen’s life has been examined during the process for beatification.”

In its Dec. 3 statement on the beatification delay, the Diocese of Peoria said that “it has been demonstrated definitively that [Sheen] was an examplary model of Christian conduct and a model of leadership in the Church. At no time has his life of virtue ever been called into question.”

The diocese said that on Dec. 2 “the Holy See decided to postpone the date of Beatification, at the request of a few members of the Bishops’ Conference who have asked for further consideration.”

“Bishop Jenky is deeply saddened by this decision,” the statement added.

“In particular, Bishop Jenky is even more concerned for the many faithful who are devoted to Sheen and who will be affected by this news.”

Jenky is “firmly convinced of the great holiness” of Sheen, and “remains confident that Sheen will be beatified.” The cause for Sheen’s beatification and canonization will continue and, the press release stated, there have been “many miracles” reported through Sheen’s intercession, including some as recently as the last three weeks.

The Peoria diocese stated that the delay was not the result of any allegations of abuse of a minor.

“In our current climate, it is important for the faithful to know there has never been, nor is there now, any allegation against Sheen involving the abuse of a minor,” the release added.

The lawsuit was initially filed federally, and dismissed, and the lawyer who filed it was sanctioned by the court, which suggested that the suit was seeking publicity and was “littered with wholly irrelevant, inflammatory, and embarrassing facts concerning defendants and non-defendants alike that have no bearing on the actions brought.”

The suit was subsequently filed in state court and then dismissed.

Hoatson told CNA Dec. 3 that at the request of the victim he would not comment on the allegation at this time, citing her desire for anonymity and confidentiality.

“The victim just wants to remain quiet about it, and has asked me not to say anything more,” he told CNA.

Hoatson was laicized in 2011 and now leads an organization called Road to Recovery, through which he has offered support to victims of clerical sexual abuse, and advocated for changes to Church teaching and discipline on clerical issues.