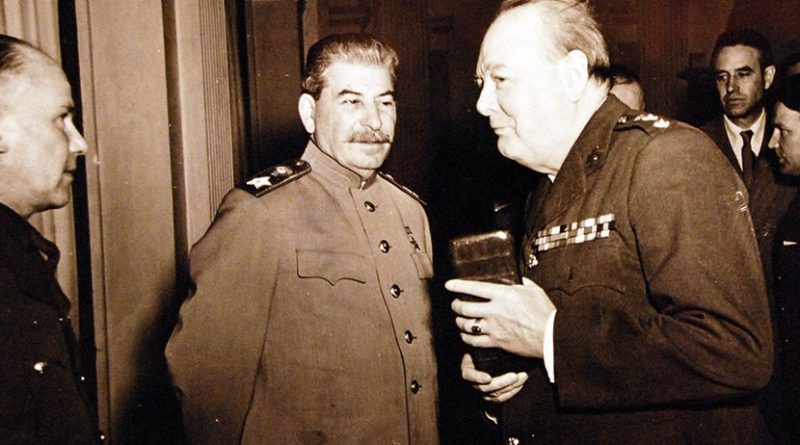 Winston Churchill called it the “worst journey in the world”. To the sailors who served aboard the Arctic Convoys in the Second World War, Churchill’s remarks certainly wouldn’t have seemed to be an understatement. As war raged across the Pacific, Africa, and Europe, the frozen expanses of the Arctic Sea did not remain untouched. Here, the battle between Nazi Germany and the Allied powers continued as a cat-and-mouse game – the Germans fighting to prevent supplies getting through to the Soviet Union, and the Allies desperately sending equipment in the hope this could help the Russians keep the Nazis at bay long enough for a second front to be launched.

The stage for this battle was set in the summer of 1941, when Hitler tore up the Molotov-Ribbentrop Pact that had forged an uneasy peace between the two European powers. As war began, a surprised Soviet Union found itself on the backfoot trying to stem the Nazi advance. The Wehrmacht forged on ahead towards capturing large swathes of territory, setting alarm bells ringing in the Allied nations.

Russia was what lay between Germany and Britain. The Russians had long demonstrated courage and resilience in the face of adversity. But even the toughest needed guns to fight against the implacable German advance. If the Soviet Union were to fall, German forces, with the added advantage of unfettered access to Soviet mineral reserves and territorial depth, would be free to defend against any Allied excursion from the west.

In July 1941, the Allies, mindful of the consequences that would ensue should German forces be freed from the Eastern Front, gave the go-ahead to the convoys – a decision was taken at the highest levels that the Soviet Union could not be allowed to fall. The first, codenamed Dervish, set off from Iceland on 21 August 1941, arriving in Archangel 10 days later. This precursor to the later series of convoys comprised six merchant ships and a fleet oiler escorted by three destroyers, three minesweepers, and three anti-submarine warfare vessels. At the same time, a superannuated carrier, the HMS Argus – re-commissioned just prior to the war, delivered a cargo of Hurricane fighters to Murmansk.

The success of this ad-hoc convoy led the Royal Navy to draw up a formal series of convoys that would deliver supplies to the Soviet Union, allowing the Russians to keep up their resistance to the German war machine.

The first of the outbound convoys, PQ1, set off from Iceland on 29 September. At around the same time, the first of the inbound convoys, QP1, departed from Murmansk. The initial PQ/QP series ran till 1942, when in December, the second series, JW (outbound to Russia), and RA (inbound from Russia) were kicked off. The inbound and outbound convoys were timed to run almost simultaneously, allowing the inbound ships to return with the heavy escorts, while the outbound vessels continued to their destination under cover of the close-in escorts.

Over the course of four years, these convoys – sailing from Hvalfjord, Liverpool, Loch Ewe, Oban, and Clyde – set off for various locations in the Soviet Union – Murmansk, Archangel, and the Kola Inlet – eventually delivering over four million tonnes of supplies – including thousands of aircraft, tanks, and trucks.

But while the convoys may have been a godsend for the Russians, they were a hellish experience for the men fated to serve aboard them. In the nearly four years the Arctic Convoys were staged, the Allies lost 16 warships and 85 merchantmen. While it may not seem that much – a ‘paltry’ 5% loss rate – given the widespread slaughter that took place in the Second World War, it must be kept in mind that over 5,000 sailors went down with their vessels.

It was convoy PQ 17 that suffered the worst of the German attacks. The Hvalfjord-Archangel mission was detected by German ships, which, through a series of hit-and-run attacks, succeeded in drawing off most of the naval escorts, leaving the convoy bare. PQ17 was ordered to disperse, and bereft of naval cover, the merchantmen were easy pickings for the Kriegsmarine. Of the 35 ships that had set off from Iceland on 27 June 1942, just 11 made it to Russia – the Allies losing 24 vessels and almost 200 sailors in return for German losses of just five aircraft.

The PQ17 disaster, which resulted in much soul-searching in the London Admiralty over the viability of the Arctic Convoys, also led to the introduction of tighter escort rings and the suspension of new missions till the long daylight hours of the Arctic region receded. Interestingly, the PQ17 tragedy has also entered popular culture. Thriller writer Alistair Maclean (who himself served in this theatre) is said to have based his first book, HMS Ulysses, on the travails endured by those fated to be a part of PQ17.

Considered by many to be Maclean’s finest work, HMS Ulysses paints a grim picture as the crew of the Ulysses battle fierce storms, German attacks, poor morale, and Admiralty indifference in what is ultimately a futile effort.

It was indeed a tough task; accounts of those who survived make for harrowing reading. Waves high as cliffs, fires, water freezing on the decks, and temperatures so low that skin could be stripped off from contact with bare metal were commonplace. Living conditions, never the easiest on a ship, were horrendous in these sub-zero temperatures. Amplifying these difficulties were the obsolescence of several of the ships that served here, and the young ages of the sailors – some of the merchant mariners were as young as 14.

To add to this was the constant danger posed by the Kriegsmarine. The Germans had come to realise the significance of the convoys and they threw everything they could at them. However, while they seemed to be gaining the upper hand, Allied advances in the then-revolutionary technology of radar and direction-finding soon reversed this trend. The bad weather also constricted the U-boat wolfpacks, while the Allies’ success in cracking the Enigma machines also proved invaluable. Nevertheless, the Germans were able to extract a heavy price from the sailors aboard the convoys.

Surprisingly, the Arctic Convoys have been relegated to being a footnote in the history of the Second World War. But their importance to the war effort cannot be minimised – it wasn’t just the supply of weaponry to the Russians that was vital. The Kriegsmarine found itself tied up in the Arctic Sea, with the battleship Tirpitz cornered (and eventually sunk) in the Norwegian fjords. This focus on the Arctic also helped divert attention from the Atlantic, where the US was sending immense quantities of men and equipment to the British Isles. But perhaps, most importantly, the success of the convoys boosted the Russians’ morale during the early days of the war and dealt a psychological blow to the German high command, which feared that the Allies could attempt a major invasion from the north.

Seventy years have passed since Dervish, and few of the veterans of the Arctic Convoys remain, but finally, the sacrifices made by those who served in this theatre of war have received some recognition. Russia has instituted a commemorative medal, while the UK has the Arctic Emblem. However, efforts to have a special campaign medal in the UK have come to nought. One can only hope that the British government decides in its favour while there still are veterans left to honour.

Home » To Hell And Back: The Arctic Convoys Of WWII Provided Lifeline To Soviet Union, But Extracted At Terrible Cost

Vaibhav Sharma is a freelance writer-photographer from New Delhi and works as a consultant editor with Management Compass magazine. His areas of interest include military history, international relations, politics, technology, and travel. To get in touch with Vaibhav, mail him at [email protected] / [email protected] or look him up on Twitter at @taoofdudeism. You can also hop over to Vaibhav's photography site at www.vaibhavsharmaphotography.com and his blog at www.taoofdudeism.com.