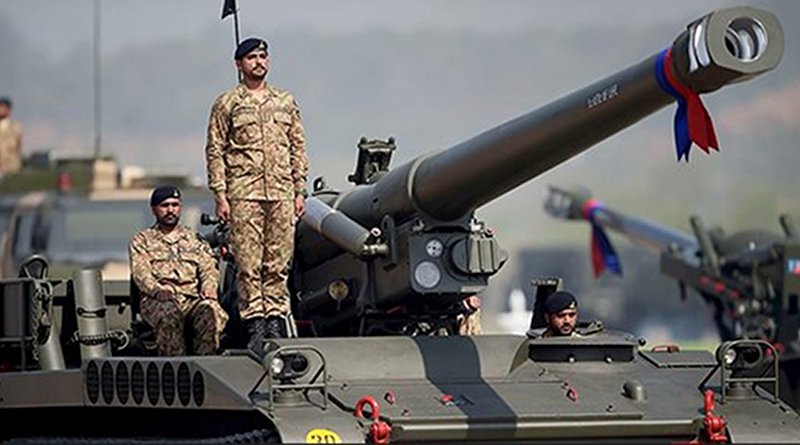 With Pakistan’s Minister for Interior Sheikh Rashid’s announcing that “cases will be registered against people using foul language against the armed forces within 72 hours,” two things are evident. One, that public criticism of the armed forces, [which till very recently was something unheard of in Pakistan], has now reached tipping point, and two, that the people have started rejecting Rawalpindi’s self-assumed role of being Pakistan’s exclusive conscience-keepers.

Rashid’s threat of throwing the book at those who use “foul language” at Pakistan army also indicates that despite compelling evidence regarding the rampant use of strongarm tactics to ‘discipline’ detractors through abductions [and at times even assassination] by its spy agency Inter Services Intelligence [ISI], such intimidatory measures are no longer scaring the public.

However, the Interior Minister’s warning legal action against those demeaning the armed forces comes as no big surprise. Readers may recall that in September last year, PTI senator Amjad Ali Khan tabled a proposed amendment to Pakistan Penal Code [PPC] seeking to criminalise any act that “intentionally ridicules, brings into disrepute or defames the Armed forces or a member.”

The statement of objects and reasons submitted alongwith proposed PPC amendment bill elucidated that “The purpose of this amendment is to prevent hatred and disrespectful behaviour against the Armed Forces.” But what this document hasn’t been clarified is the necessity for adopting such a drastic measure that could well curb freedom of expression guaranteed to Pakistani citizens by Article 19 of the constitution!

One doesn’t have to be a Sherlock Holmes to deduce that in actuality, the PPC amendment bill has been prepared by the government on the obvious instructions of the army and then tabled in the senate as a private member bill. The reason for following such a convoluted process too is not very difficult to discern. Currently, the main issue that purportedly “ridicules, brings into disrepute or defames the Armed forces” is its alleged role in manipulating the 2018 General Elections to ensure that Pakistan Tehreek-e-Insaf [PTI] party comes into power so that its protégé Imran Khan becomes Prime Minister.

The ongoing political controversy in Pakistan centres around the issue of whether Khan has been elected the people or ‘selected’ by Pakistan army. Hence, introducing PPC amendment bill to protect the army from slander in effect amounts to a serious conflict of interest, since through it, the PTI government is seeking to defend its own legitimacy by silencing criticism of Rawalpindi’s dubious role in this issue. But by going ballistic and publicly threatening legal action against those criticising the army, the Interior Minister has unwittingly also accepted that intensity of public anger against the army is such that the situation is desperate, which justifies institution of desperate measures like stifling freedom of expression.

Rashid’s awkward attempt of saving Pakistan army from disparagement must have certainly caused immense embarrassment to an army, that despite its long history of unconstitutional acts like overthrowing democratically elected governments, had still remained beyond reproach for more than seven decades and got used to the same. But now, with Khan’s efforts to divert public attention from the ‘elected’ versus ‘selected’ debate by saying that “the sort of language that is being used for the army today is the kind that India’s propaganda machine uses against the army” finding no takers, the ‘army can do no wrong’ cookie has finally crumbled!

But while Khan is certainly playing Pakistan’s emotive and age-old anti India rant, Sharif too isn’t an exactly angel of virtue and there’s no doubt he certainly has an axe to grind with the army. After all, he has been ousted from office by the military twice- the first time, by a military coup, and the second time in what may believe indirectly [through the judiciary]. So, while his broadside at the military may be motivated, still his allegations can’t be summarily dismissed as the unjustified ranting and raving of a prejudiced person seeking vengeance and political rehabilitation. The reason for this is elementary- if Sharif’s allegations genuinely lacked any substance, then why would the 11 political parties that have come together under the Pakistan Democratic Movement [PDM] umbrella, jeopardise their own credibility as well as antagonise the military establishment by endorsing a false claim?

However, the million-dollar question that remains unanswered is whether the PDM’s allegations of the army’s involvement in manipulating election results are true? While it would be naïve to expect finding any concrete evidence to either substantiate or disprove this allegation, there’s no dearth of credible indicators as evident from a few references of the many post-election observations made by very respected organisations and personalities as enumerated below:

By saying that Pakistan’s Armed Forces have never indulged in politics and would not do so, Interior Minister Rashid has outrightly dismissed Justice Siddiqui’s admission that “Today the judiciary and the media have come in the control of the ‘bandookwala’ [army]” and that the “judiciary is not independent.” But Imran Khan’s allegation that Sharif became chief minister of Punjab by “polishing General Zia’s shoes” not only belies his Interior Minister’s claim, but is also an unambiguous reaffirmation of the fact that Pakistan army has a long history of filling political posts with their ‘selected’ candidates. So, if such manipulation [as per Khan’s own admission] could take place in Gen Zia’s time, then why couldn’t have happened during Gen Bajwa’s tenure?

But all said and done, there’s a need for Islamabad to put extraneous issues aside and ensure that justice is done and Sharif is brought to book. Accordingly, it’s heartening to hear Rashid telling the media that in order to facilitate the former prime minister’s deportation, his passport, which would expire on February 16 wouldn’t be renewed. However, the bad news is that according to PTI, “[when] asked about cancelling retd Gen Pervez Musharraf’s passport, Rashid said his department had not received any such application.” Since just like Sharif, Gen Musharraf, too is a ‘proclaimed offender’, Rashid’s puerile excuse justifying non cancellation of Gen Musharraf’s passport exposes a clear discriminatory bias against the former prime minister and a definite benevolent concession to the former army chief.

This in turn goes to strongly suggests that Imran Khan may after all, actually be a ‘selected’ and not the elected Prime Minister of Pakistan.