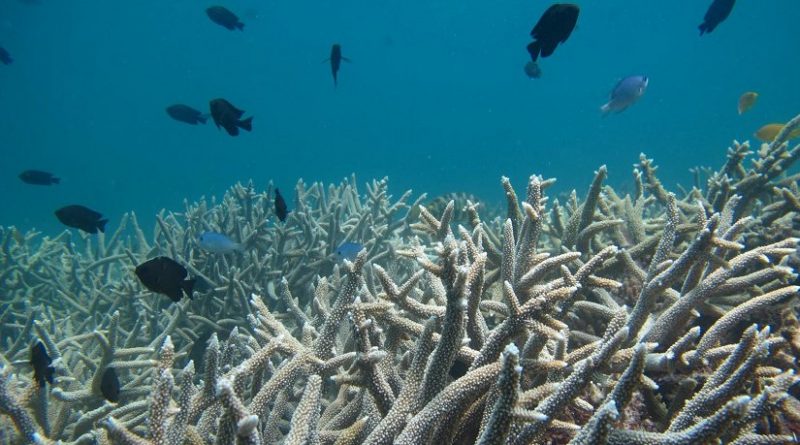 The Griffith University study, conducted in collaboration with national and international experts in reef and chemical ecology, showed that if the world continues with ‘business as usual’ CO2 emissions important reef building corals will suffer significantly by 2050 and die off by 2100.

Associate Professor Guillermo Diaz-Pulido, of Griffith’s School of Environment, said that is because algae will compete for space with corals in the reef, much like a weed, and eventually take over.

Researchers knew increased CO2 had an effect on seaweed behavior but have now been able to demonstrate just how this happens. They discovered this is due to an increase in the potency of chemical compounds that poison corals.

“This is a major step forward in understanding how seaweeds can harm corals and has important implications for comprehending the consequences of increased carbon dioxide emissions on the health of the Great Barrier Reef,” said Associate Professor Diaz-Pulido.

“For the algae to grow they need light and CO2, just like any other plant, and because algae in the future would be exposed to much more CO2 in seawater we wanted to know to what extent the CO2 would affect some of the things algae do, the physiology and the interaction with animals.”

Professor Mark Hay, from the Georgia Institute of Technology and co-author of the study, added: “What we’ve discovered is that some algae produce more potent chemicals that suppress or kill corals more rapidly. This can occur rapidly, in a matter of only weeks.

“If the algae overtake the coral we have a problem which contributes to reef degradation, on top of what we already know with coral bleaching, crown of thorn starfish outbreaks, cyclones or any other disturbance.”

The research was undertaken at Heron Island, a coral cay on the southern end of the reef using underwater reef experiments and outdoor lab studies.

Associate Professor Diaz-Pulido said the study has global impacts because one of the seaweeds studied that causes the most damage is a common brown alga species found in reefs worldwide.

“That’s a problem because if these algae take advantage of elevated CO2 in seawater that’s even more a matter of concern,” he said.

“The scale of the problem is so big removing a bunch of seaweed from the reef isn’t going to do much because it just regrows and regenerates, so I think the way to address this really is to reduce the levels of CO2 in the atmosphere.”