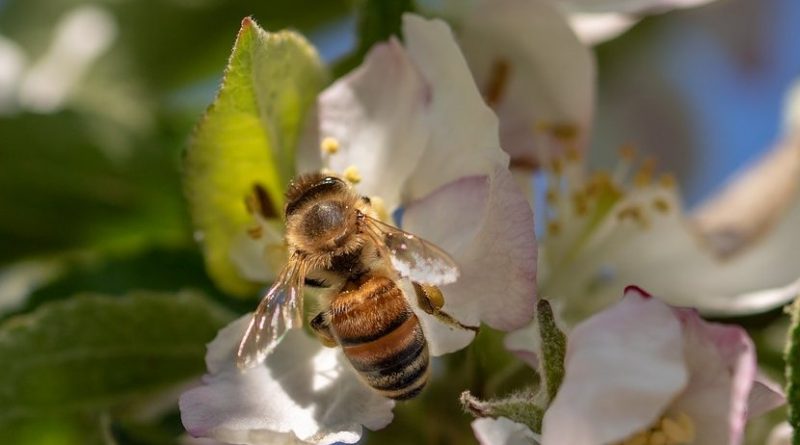 It’s about time for the annual mass migration of honeybees to California, and new research is helping lower the chances the pollinators and their offspring will die while they’re visiting the West Coast.

Each winter, professional beekeepers from around the nation stack hive upon hive on trucks destined for the Golden State, where February coaxes forward the sweet-smelling, pink and white blossoms of the Central Valley’s almond trees.

Almond growers rent upwards of 1.5 million colonies of honeybees a year, at a cost of around $300 million. Without the bees, there would be no almonds, and there are nowhere near enough native bees to take up the task of pollinating the trees responsible for more than 80 percent of the world’s almonds. The trouble was, bees and larvae were dying while in California, and nobody was sure exactly why. The problem started in adults only, and beekeepers were most worried about loss of queens.

Then in 2014, about 80,000 colonies – about 5 percent of bees brought in for pollination – experienced adult bee deaths or a dead and deformed brood. Some entire colonies died.

With support from the Almond Board of California, an industry service agency, bee expert Reed Johnson of The Ohio State University took up the task of figuring out what was happening. Results from his earlier research had shown that some insecticides thought safe for bees were impacting larvae. Building on that, Johnson undertook a new study, newly published in the journal Insects, that details how combinations of insecticides and fungicides typically deemed individually “safe” for honeybees turn into lethal cocktails when mixed.

Johnson, an associate professor of entomology, and his study co-authors were able to identify the chemicals commonly used in the almond groves during bloom because of California’s robust and detailed system for tracking pesticide applications. Then, in a laboratory in Ohio, they tested combinations of these chemicals on honeybees and larvae.

In the most extreme cases, combinations decreased the survival of larvae by more than 60 percent when compared to a control group of larvae unexposed to fungicides and insecticides.

“Fungicides, often needed for crop protection, are routinely used during almond bloom, but in many cases growers were also adding insecticides to the mix. Our research shows that some combinations are deadly to the bees, and the simplest thing is to just take the insecticide out of the equation during almond bloom,” he said.

“It just doesn’t make any sense to use an insecticide when you have 80 percent of the nation’s honeybees sitting there exposed to it.”

The recommendation is already catching on and has been promoted through a wide array of presentations by almond industry leaders, beekeepers and other experts and has been included in the Almond Board’s honeybee management practices. Many almond growers are rethinking their previous practices and are backing off insecticide use during almond bloom, Johnson said.

That’s good news for bees, and doesn’t appear to be harming the crops either, he said, because there are better opportunities to control problematic insects when almonds are not in bloom.

“I was surprised – even the experts in California were surprised – that they were using insecticides during pollination,” Johnson said.

While these products were considered “bee-safe,” that was based on tests with adult bees that hadn’t looked into the impact they had on larvae.

“I think it was a situation where it wasn’t disallowed. The products were thought to be bee-safe and you’ve got to spray a fungicide during bloom anyway, so why not put an insecticide in the tank, too?”

Insecticides are fairly inexpensive, but the process of spraying is labor-intensive, so growers choosing to double up may have been looking to maximize their investment, he said.

“The thing is, growers were using these insecticides to control a damaging insect – the peach twig borer – during this period, but they have other opportunities to do that before the bees enter the almond orchards or after they are gone,” Johnson said.

This research could open the door to more study of fungicide and pesticide use on other bee-dependent crops, including pumpkins and cucumbers, Johnson said.