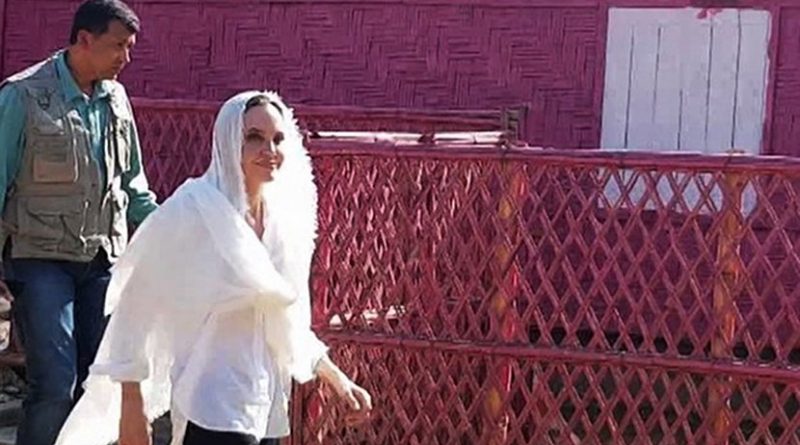 American actress and UNHCR special envoy Angelina Jolie walks toward a refugee camp in Cox’s Bazar, Bangladesh, at the start of a three-day visit to the country, Feb. 4, 2019. Photo Credit: Benar News

By Abdur Rahman and Jesmin Papri

Hollywood superstar and U.N. ambassador Angelina Jolie heard stories of abuse when she met Rohingya children and women at a refugee camp in southeastern Bangladesh on Monday, authorities said, as she began a three-day visit to the country.

Jolie, a special envoy for the UNHCR refugee agency, spent more than three hours at the Chakmarkul refugee camp in Cox’s Bazar district, ahead of the launch of a new humanitarian funding appeal by the United Nations for almost $1 billion.

“During her visit, she talked to refugees, including women and children, and listened to their stories of abuse toward them in Myanmar,” Mahbubur Rahman, an official with Bangladesh’s Refugee, Relief and Repatriation Commission, told BenarNews.

More than 700,000 Rohingya have sought shelter at camps in the country’s southeast corner after fleeing their homes in neighboring Myanmar at the height of an army crackdown in August 2017.

Haresa Begum, a 10-year-old refugee, said she was among those who met the actress.

“She asked me how I’m doing now, which grade do I attend and why I fled to Bangladesh,” Begum told BenarNews.

“I said, ‘I am well now. I want to study more. I came here to escape torture by the Myanmar army. We were very badly abused there. We want justice,’” she said.

“She asked Jahanara how is she doing now? Jahanara told her that she is OK here, but wanted to bring the Myanmar army to justice for abusing them,” Zaber told Benar. “Jahanara also told Jolie that she wants to return to Myanmar with her Rohingya identity and citizenship rights.

Jolie came to Bangladesh “to assess the humanitarian needs” of the refugees and the challenges faced by Bangladesh in hosting the refugees from Myanmar, according to a statement issued by UNHCR on Monday. The unprecedented influx of refugees who fled to Bangladesh because of the August 2017 crackdown in Rakhine state were escaping from what the United States and U.N. investigators had described as “ethnic cleansing” targeting the Rohingya people.

“Her visit comes just before the launch of a new appeal for the humanitarian situation in Bangladesh – the 2019 Joint Response Plan – which seeks to raise some $920 million to continue meeting the basic needs of Rohingya refugees and the communities so generously hosting them,” the statement said.

It said that Jolie, 43, who was representing the UN High Commissioner at the diplomatic level, was expected to meet with Prime Minister Sheikh Hasina, Foreign Minister A.K. Abdul Momen and other officials to discuss “safe and sustainable solutions” to the plight of the refugees.

UNHCR said Jolie had previously met Rohingya refugees in Myanmar in 2015 and in India in 2006.

Buddhist-majority Myanmar considers the Rohingya as illegal migrants and has long denied them citizenship and basic rights, despite their long roots in Rakhine state.

Bangladesh has accused Myanmar of finding excuses to delay taking refugees back and Rohingya leaders have previously said that those sheltering at the overflowing refugee would not go back until their safety is guaranteed.

Jolie, who was appointed U.N. special envoy in April 2012, arrived at Cox’s Bazar Airport on board a Novo Air flight. She had previously carried out almost 60 field missions related to refugees, officials said.

But Abdus Shukur, a Rohingya refugee, expressed skepticism about Jolie’s presence at the camp.

“Many celebrities come to visit us, but did that make any change for us?” Shukur told BenarNews. “They just come and go, but have we received justice? Could we manage to return home with our Rohingya identity?”