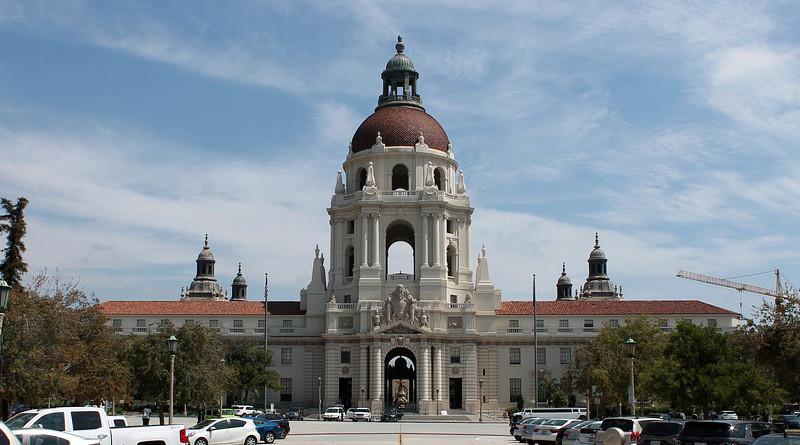 By Chen Gong and Junhui Chu*

Pasadena is located at Southern California, northeast of Los Angeles. It is part of San Gabriel and the Greater Los Angeles Metropolitan Area. The distance between Pasadena and Los Angeles urban area and Los Angeles airport is within 20 kilometers, which is considered to be a relatively convenient distance in the United States.

The city is a major employment center in the San Gabriel, and it has a wealth of educational resources. The California Polytechnic State University is part of these resources, so the city is in the right conditions for technological innovation. In addition, the city’s economic structure is diversified, and its main focus is in the tertiary industry. The top 5 industries by number of jobs are medical, technological, innovation, retail, hotel and finance and insurance. The city center has been the first to undergo renovation since the 1990s, which transformed it into a well-known representative of the downtown business district.

Based on the conditions above, this city should have good economic development, innovation and financial structure without a city center that is run-down. It seems that Pasadena fits perfectly with the pursuit of many cities today. Unfortunately, the city’s economy has been in decline since 2007. In the past 10 years, the unemployment rate has increased by 5.4%, the total number of jobs has decreased by 5.3%, the retails sales have decreased by 10.7%, the consumption tax has not improved much, and traditional businesses have been hit by online shopping. Moreover, fewer people are willing to go to the street. Although there are educational resources like the California Institute of Technology, there is a large decline in the innovative industries. Many companies that started in the city have left it once they reached further development stages.

The city of Pasadena is in effect, a city in crisis. The failure to regard the development of people as a core concept is the key reason for its decline. As the construction of this city is not people-oriented, only 26% of its employees live within the city, while the rest live in nearby cities. This has exerted a lot of pressure in the city’s traffic. The city’s traffic jam is ranked the worst in Los Angeles’s metropolitan area. The commute time is usually about an hour, and it mainly relies on cars for transportation.

The city government has decided to build a highway to ease the traffic pressure. However, after nearly 60 years of discussions, it ended in failure and half of the highway constructions ceased. One of the main reasons for this to happen is due to strong protests by local residents. The local residents wish to have a multifunctional urban complex instead of a highway. The construction of this highway would have separated the residents on the east and the west, which makes it very convenient to visit the city center.

The government has failed to listen to the voices of the local residents and consider the actual needs of the people. As a result, the heavy investments in the construction of the highway went down the drain. A transportation research institute has found out that an improvement in pedestrian street design such as traffic lights and an increase in the efficiency of public transportation system can alleviate traffic congestion. However, with the exception of the pedestrian-friendly Central Business District, other areas in Pasadena have traffic lights, crosswalks, bus stops and routes that are not reasonably designed, and they do not encourage the use of pedestrian streets and public transportation. There are even places which are very unsafe and inconvenient for people to travel.

In addition, most of the streets have few stores that consist of monotonous office buildings and residences, which are very dull looking. The lack of suitable walking space is a major cause of depression in the retail industry. Urban planners have failed to understand the importance of human experience to the vitality of a city. At the same time, the city also faces huge problems like insufficient housing and expensive rents. The average rental fee has accounted for more than 30% of the living expenses of local employees, which is considered a high proportion in the United States. Most of the workers have to live in other cities, while some even leave Pasadena to choose a more attractive and convenient life. This leads to a loss of talents which results in companies leaving Pasadena.

In order to attract talents and businesses, Pasadena has also built a special theatre area with advanced facilities. However, these elements lack uniqueness and comparative advantages, which gradually weakens Pasadena’s attractiveness. Generally, people have a high standard on the quality and convenience of their lives, and whether their various needs have been met. With the advancement of science and technology, transportation is becoming more convenient, spatial boundaries of cities are gradually weakened, restriction in distances among people are reduced and the people today have more freedom to move conveniently. Hence, the livability of a city is very important to attract people and maintain its vitality. Keeping the people as the top priority in urban development should not remain merely as a discussion of ideas. In fact, it should be taken seriously as it serves the urban economy and affects the sustainable development of a city.