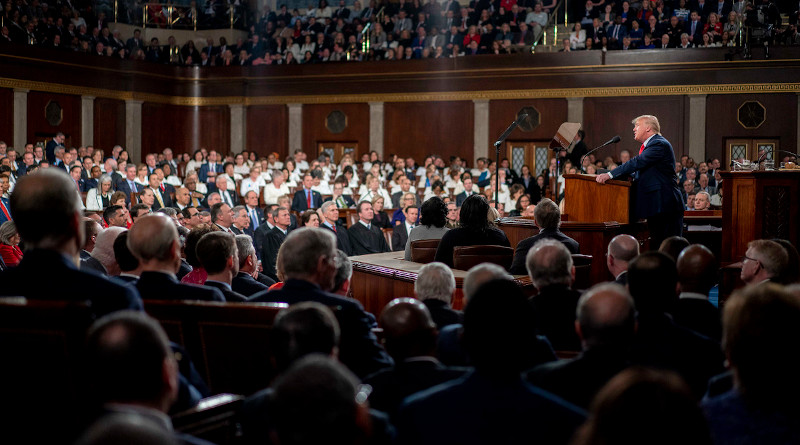 The rebuilding of the U.S. military, the creation of the U.S. Space Force and attacks on terrorists were among the topics President Donald J. Trump covered in his State of the Union address.

“Our military is completely rebuilt, with its power being unmatched anywhere in the world — and it is not even close,” the president said in the nationally televised report to Congress on Tuesday night.

Trump said the military is feeling the effects of $2.2 trillion invested in the services since he took office in 2017. “We have purchased the finest planes, missiles, rockets, ships, and every other form of military equipment — all made in the United States of America,” he said.

He also touted his efforts to get allies to increase their defense spending. “I have raised contributions from the other NATO members by more than $400 billion, and the number of allies meeting their minimum obligations has more than doubled,” the president said.

Trump also spoke of the creation of the first new armed service since 1947: the U.S. Space Force. While it is a new service, he said, it will build on American traditions and accomplishments. He pointed out 13-year-old Iain Lanphier, an eighth-grader from Arizona, who aspires to go to the U.S. Air Force Academy and then into space.

“Sitting beside Iain tonight is his great hero,” Trump said. “Charles McGee was born in Cleveland, Ohio, one century ago. Charles is one of the last surviving Tuskegee Airmen — the first black fighter pilots — and he also happens to be Iain’s great-grandfather.”

Trump pointed out gains made against radical Islamic terrorism. He noted that when he took office the Islamic State of Iraq and Syria held more than 20,000 square miles of territory in the Middle East. “Today, the ISIS territorial caliphate has been 100 percent destroyed, and the founder and leader of ISIS — the bloodthirsty killer [Abu Bakr]  al‑Baghdadi — is dead,” he said.

The president also discussed the motivation for killing Iranian Quds Force commander Qassem Soleimani last month, citing the killing of Army Staff Sgt. Christopher Hake in Iraq in 2008 as part of the reason he ordered the strike.

The sergeant was killed by weapons from Tehran provided by Soleimani, Trump said. “Soleimani was the Iranian regime’s most ruthless butcher, a monster who murdered or wounded thousands of American service members in Iraq,” he said. “As the world’s top terrorist, Soleimani orchestrated the deaths of countless men, women and children. He directed the December assault on United States forces in Iraq and was actively planning new attacks. That is why, last month, at my direction, the United States military executed a flawless precision strike that killed Soleimani and terminated his evil reign of terror forever.”

“Our message to the terrorists is clear:  You will never escape American justice. If you attack our citizens, you forfeit your life,” the president said.

Trump called on the Iranian regime to abandon its pursuit of nuclear weapons, stop spreading terror, death and destruction, and start working for the good of its people. “Because of our powerful sanctions, the Iranian economy is doing very poorly,” he said. “We can help them make it very good in a short period of time, but perhaps they are too proud or too foolish to ask for that help. We are here. Let’s see which road they choose. It is totally up to them.”

Trump said “tremendous progress” is taking place in Afghanistan and that peace talks with the Taliban are underway. “I am not looking to kill hundreds of thousands of people in Afghanistan, many of them innocent,” he said. “It is also not our function to serve other nations as a law enforcement agency. [U.S. service members] are warfighters, the best in the world, and they either want to fight to win or not fight at all. We are working to finally end America’s longest war and bring our troops back home.”