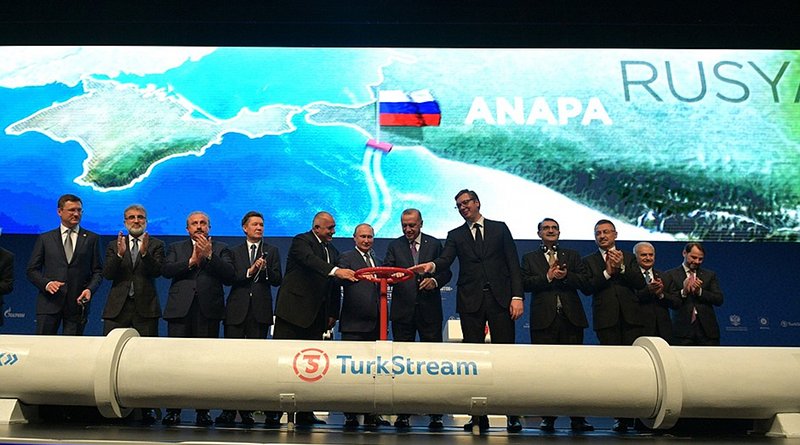 Gazprom supplied its first billion cubic meters of gas via the TurkStream gas pipeline, which started its commercial supplies on 1 January 2020, says the message published on the website of the Russian energy company on January 27. Of that amount, about 54 per cent went to the Turkish gas market and some 46 per cent was delivered to the Turkey-Bulgaria border.

The ceremony to launch TurkStream gas pipeline in Istanbul on 8 January was attended by Russian President Vladimir Putin, the Turkish leader Recep Tayyip Erdogan, President of Serbia Aleksandar Vucic and Prime Minister of Bulgaria Boyko Borissov. Speaking at the ceremony, Vladimir Putin stressed that the new gas pipeline is a very important event for the entire European continent.

He noted that Russia has been exporting gas to Turkey for 30 years: it was initially shipped through the Trans-Balkan gas pipeline, then through the direct, transit-free Blue Stream pipeline, and today it is shipped via a new route, the TurkStream.

“This is in many ways a unique deep-sea gas transportation system, unprecedented in some parameters. Two parallel lines with a capacity of almost 16 billion cubic metres of gas each have been built. This involved laying over 1,800 kilometres of pipes, some of them at a more than two kilometre depth. This was difficult, hard work. It is also a high-tech project because the gas pipeline runs at tremendous depth, as well as in a very hostile environment,” Vladimir Putin said.

He also paid attention to the fact that advanced innovative technologies allowed to achieve the highest economic efficiency of gas transportation, and guarantee the safety and environmental friendliness of the pipeline operation.

The Russian leader reminded that the first line delivers gas from the fields in western Siberia directly to the Turkish partners, and the second one crosses Turkey to the Balkans, carrying fuel to Bulgaria, Serbia, and Greece.

“Again, the supply of Russian gas through TurkStream will undoubtedly be of great importance for not only the Turkish economy and the Black Sea region, but will also have a positive impact on the development of many south European countries, and will contribute to improving Europe’s overall energy security,” the head of state added.

Commenting on the launch of the new gas pipeline and its impact on the energy market, Harun Ozturkler, economy researcher, associate professor of Economic and Administrative Sciences at the Kirikkale University, noted that the TurkStream not only allows to supply gas to EU countries bypassing Ukraine, but also represents a new marketing strategy.

“Russia wants to sell the gas at the border of the EU, that is, Russia wants to sell the gas directly to the consumer-the end user. On the other hand, although EU will have a secure and comparatively less costly gas supply through the TurkStream, it will result in an increasing dependency to Russian gas. Although the TurkStream is not an economically driven project, it will provide Russia as an economic leverage against US and EU’s economic sanctions on Russia. Growing gas demand and declining domestic production force EU to make a choice among US, Qatar and Russia for import of gas. The GCC-Qatar conflict and heighten tensions in Middle East create supply security concerns. The US pressures the EU to buy liquefied natural gas from the US instead of Russia. Although US LNG can be considered as a way of diversification for EU, it is comparatively more expensive than Russian gas imported though pipeline,” the expert told PenzaNews.

In his opinion, the project will also bring Russia and Turkey economically closer, which will also lead the two countries to cooperate on geopolitical issues in the region and beyond.

In turn, Pyotr Pushkarev, TeleTrade Chef Analyst, stressed that the TurkStream was created for Europe “with room to grow.”

“The capacity of its two lines is 15.75 billion cubic meters per year each. Today there is no need to use them at full capacity, only 40–60% is required due to the existing demand security. However, the new gas pipeline is already solving many other problems. First of all, this is a decrease in dependence on transit countries, including Ukraine, since deliveries will go directly from Russia. This reduces the cost of imports for southern Europe, increases its reliability, and reduces geopolitical risks. For Europe, the TurkStream means expanding the direction of gas production, and approaching its final consumers in Turkey, Serbia, Hungary, Bulgaria,” the expert said, noting that in general it “is a good headstart covering the increase in demand for decades to come.”

In his opinion, the project is especially important for Turkey, where a gas transportation hub – a logistics hub for the distribution of fuel in various territories of Southern Europe – is being formed.

“This increases the importance of the country in the region. Joint creation and operation of the TurkStream also contributes to the development of cooperation between the two countries, and forms new points for positive bilateral relations. In addition, this interaction is important for strengthening the position of Russia as a partner in Europe as a whole, because gas consuming countries are part of a single European Union with its common energy balance. Russia is strengthening its position and ties with the EU economy,” Pyotr Pushkarev added.

Meanwhile, Mikhail Korchemkin, the founder and managing director of East European Gas Analysis, said that the TurkStream has and will have a very limited effect on the Russian gas exports to Europe.

“At the initial stage, TurkStream replaces the Trans-Balkan gas pipeline (TBGP) that shipped gas to Romania, Bulgaria, Turkey, Greece and Macedonia. In 2019, TBGP transported about 10 bcm compared to 20 bcm in 2017. There is no other market for TurkStream gas until the new pipeline through Bulgaria to Serbia is built,” the expert explained.

“Imports of Russian gas to Turkey dropped from 24 bcm in 2018 to below 16 bcm in 2019. Russian gas is being replaced by growing imports from Azerbaijan and LNG. Turkey reduces gas use in the power sector. A major drop of gas imports will happen with the commissioning of the Akkuyu nuclear power plant,” Mikhail Korchemkin suggested.

According to him, Turkey is importing much less Russian gas and receives stable cash flow for transit services through the land section of the TurkStream, while the ship-or-pay contract assumes full payment irrespective of the gas flow.

The analyst also stressed that the EU still has to approve the deliveries of Russian gas by the new pipeline from Turkey to Bulgaria and it is very likely that the pipeline will be open to the competitors of Gazprom – Azerbaijan and LNG delivered to Turkish terminals.

Meanwhile, Mehmet Ogutcu, Chairman of the London Energy Club, financier, expert in the field of energy and geopolitics, reminded that Gazprom already controls a sizeable portion of natural gas market in Europe including Turkey.

“Despite efforts to reduce excessive dependence on Russia for geopolitical reasons it is evident that Gazprom’s uninterrupted supply, changing contract structures and flexible pricing have worked its way to induce European customers very keen on favourable terms. Also, bold steps for moving forward with Nordstream-2 and TurkStream and breakthrough in Ukraine transit arrangement for another five years have ensured a safe stay in Europe for Gazprom for long years to come,” he said.

“This pipeline coupled with the earlier Blue Stream and other projects such as Akkuyu nuclear power plant, S-400 missiles system, tourism and security collaboration in Syria, Libya and elsewhere, will further consolidate the Turco-Russian relations. Yet there is a growing imbalance in relations including in trade and investment favouring more Russia – this has to be balanced wisely so that it is a sustainable and win-win partnership in the long run,” Mehmet Ogutcu said.

Brig Vinod Anand, Senior Fellow and Research Co-ordinator at Vivekananda International Foundation (VIF) and author of several articles on geopolitics in Asia, expressed confidence that Turkish Stream gas pipeline would be beneficial to both the Turkish and European consumers.

“Russia would be able to bypass Ukraine through the Turkish Stream and supply gas through further linkages to Bulgaria, Serbia, Hungary and Austria. Thus, the South East Europe would be able to get much needed additional energy supplies. It would positively impact the energy market of Europe especially when Russia is also planning to double the Nord Stream gas supplies through the Baltic Sea to Germany. Already, Russia’s Nordstream is supplying gas to Germany at reasonable prices. The phase two of the Turkish Stream would definitely have a positive impact on the European energy market as it would involve diversification of energy transit routes,” the analyst explained.

From his point of view, the Turkish Stream would complement the existing Blue Stream pipeline, which was put into place when the relations between Russia and the West were not conflictual.

“Even Turkish Stream was delayed because of the political differences between Russia and Turkey over Syrian conflict. However, there seems to have been a degree of reconciliation and the commissioning of Turkish Stream would further strengthen the bilateral relationship. In a way this also might reflect Turkey distancing itself, to an extent, from the Western block. On the other hand, in recent months another pipeline through Turkey has also been commissioned, that is the Trans Anatolian Pipeline (TANAP), which carries gas from Azerbaijan to Europe. Therefore, it can also be said that Turkey is exercising a balanced approach in its relationship with Russia and other countries,” Brig Vinod Anand said.

In his opinion, the EU needs access to Russian gas to ensure its energy security.

“The problem is that the US has been cautioning the European nations not to become over reliant on Russian gas as that might impact the geopolitics of the region in a disadvantageous manner to both the US and the West. However, geo-economics has become more dominant than geopolitics in this case. Both Russia, as a producer and Europe as a consumer are benefited economically because EU gets stable and a cheaper source of gas supply and Moscow gets a committed buyer,” VIF Senior Fellow said.

“With completion of Phase two of Turkish Stream Russia’s domination of Turkey’s gas market would increase but on the other hand Turkey would be able to establish itself as an energy hub and a significant transit corridor from where several pipelines from other suppliers would also pass through. Needless to say this would Turkey concomitant strategic and economic benefits. Availability of abundant gas supplies through Turkish Stream would also provide impetus to the economic growth of Turkey,” the expert concluded.

TurkStream is an export gas pipeline consisting of two lines and stretching from Russia to Turkey across the Black Sea. Its design capacity is 31.5 billion cubic meters of gas per year.

The first line is intended for the supply of Russian gas to Turkish consumers, the second – for gas supply to the countries of southern and southeast Europe.

According to Gazprom, the company holds the world’s largest natural gas reserves, with a share in the global and Russian reserves amounting to 16 and 71 per cent respectively.

Gazprom is actively implementing large-scale gas development projects in the Yamal Peninsula, the Arctic shelf, Eastern Siberia and the Russian Far East, as well as a number of hydrocarbon exploration and production projects abroad.