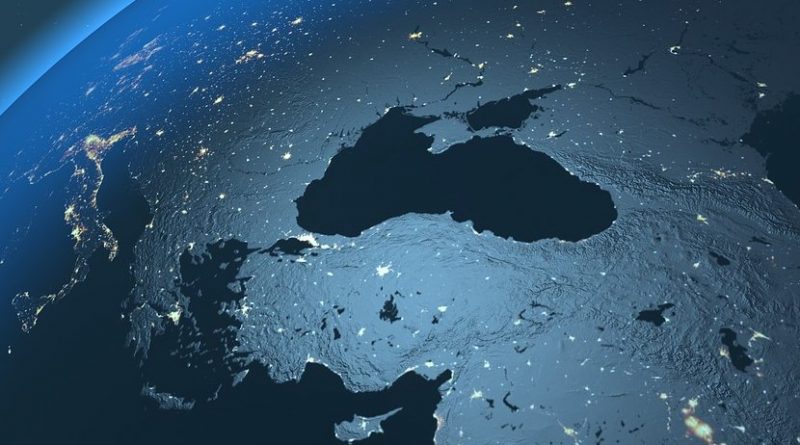 Many regard Turkey’s involvement in Syria as a reflection of the country’s ambitious foreign policy to reinstate parts of the Ottoman Empire, whose existence ended following World War I. However, rather than connecting Turkey’s current foreign policy to its Ottoman past, for those living in the region bordering on Turkey, it is the country’s geography that is perhaps the most powerful driver behind Ankara’s geopolitical moves in the last decade.

The country borders on five geographic regions with varying geopolitical importance: the Black Sea, the Balkans, the Mediterranean, the South Caucasus, and Syria-Iraq. What these regions have in common is crises of alternating magnitude that directly impact Turkey’s borders. This simple geography conditions Ankara’s active foreign policy. Quite naturally, Ankara has been responsive to various crises along its borders. Simple geopolitical theory dictates that to secure its interests in the five regions, Turkey needs to be active/responsive to various troubles along its borders.

Among the above-given five theaters, the Syrian conundrum is one example where troubles have a spillover effect on internal Turkey, the scenario Ankara has strived to avoid since 2011 (the outbreak of the Syrian civil war) through limited/medium military operations in northern Syria. This puts Ankara in direct competition with Russia as the latter pursues its strategic goals of securing the sovereignty of Syria under the current President, Bashar al-Assad.

Another region which worries Turkey (but for the moment is overshadowed by the Syrian problem) is the worsened security situation in the Black Sea region. Though Turkey and Russia cooperate on many fronts, they nevertheless remain geopolitical rivals with competing interests in several strategically vital regions across the Eurasian landmass. Turkey’s geographic position gives it the longest shore on the Black Sea and natural control over the Bosporus and Dardanelles straits, making the country capable of projecting its military and economic power across the entire Black Sea. The area has historically been a battle ground between the Russian and Ottoman empire since the 18th century, followed by the Cold War military dispositions. The annexation of Ukraine’s Crimea by Russia in 2014 as well as Ankara’s and Moscow’s natural interests in extending its zone of influence in the Black Sea, leaves little room for the two countries to find a foundational compromise in the longer run.

These fundamental developments to the south and north of Turkey will have a lasting impact on Turkey’s strategic vision of its neighborhood, where Russia’s military presence presses on Ankara’s thinking.

To solve it, it is in Turkey’s interest to have a strong Ukraine which could serve as a certain limit on Russia’s ambitions in the Black Sea area. Turkish President President Recep Tayyip Erdogan’s February visit to Ukraine underscored this Turkish thinking when pledges to support the Ukrainian military were floated.

To the east of the Black Sea, in the South Caucasus too, Turkey faces Russia. Both share somewhat different views on the region. Ever since the collapse of the Soviet Union, Turkey has actively worked on reconnecting the South Caucasus region to its growing energy consumption market by initiating/facilitating various east-west energy and infrastructure projects. The TANAP, Baku-Tbilisi-Kars railway, as well as the growing trilateral cooperation model with Georgia and Azerbaijan serves as yet another tool for Ankara to secure/strengthen its vital geopolitical interests. Turkish Foreign Minister Mevlut Cavusoglu called for Georgia’s accession into NATO during the Davos World Economic Forum in Switzerland.

With the increasingly volatile Middle East in the past decade, Turkey will continue playing a crucial role in the region’s geopolitics. Its major challenge, in the long run, will remain Russia as it increases its influence to the south and north of Turkey.

It is clear that Turkey and Russia will be striving to avoid confronting each other militarily. But to limit a predominant Russia, Turkey using its vital position as a NATO member will offer several options, among them propping up its role in Northern Syria, Ukraine and Georgia through stronger economic and potentially military cooperation.

Home » Turkey’s Evolving Approach To Its Neighborhood: The Case Of Georgia And Ukraine – OpEd

One thought on “Turkey’s Evolving Approach To Its Neighborhood: The Case Of Georgia And Ukraine – OpEd”