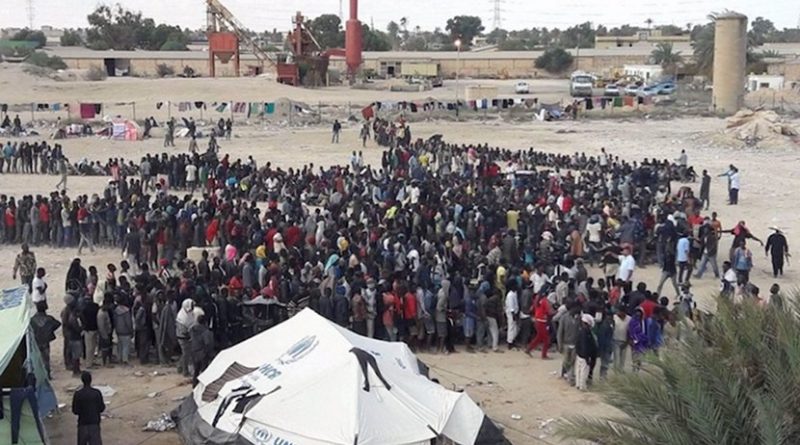 The previous two days have been rather turbulent in Israel’s policy towards African refugees seeking asylum. On April 2, Israel’s Prime Minister Benjamin Netanyahu declared a halt to deportations to Rwanda, believed to be the “third-country” he had mentioned for the first time, while announcing a new agreement with the United Nations High Commissioner for Refugees (UNHCR) to resettle half of Israel’s refugees in western countries and absorb the other half.

Within 24 hours, on April 3, he “froze” the deal. The EU office in Israel tweeted: “Guess it’s just one of those days. At 20:57 you congratulate #Israel & @refugees on their agreement, at 21:46 you like @IsraelMFA announcement on the deal, at 22:50 the PM suspends it and blames, among others, #EU (where #UNHCR hoped to resettle significant number of refugees).”

Netanyahu obliquely blamed Hungarian-American billionaire George Soros for pressurizing Rwanda not to accept African deportees. He launched a new policy aimed at coercing refugees to leave Israel by threatening employers with high taxes, and reopening detention centres, this time under legislation not amenable to the courts through a section overcoming the basic laws, which serve as Israel’s quasi-constitution.

Israel’s refugees, referred to as “Infiltrators” by Netanyahu and the Israeli law, are mainly Eritreans. As such, the ill treatment by Israel is only the last in an endless chain of cruelties inflicted on them. Most have escaped the forced National Service, an indefinite slavery-like system practiced by the Eritrean dictatorship, and refugee camps in neighbouring Ethiopia and Sudan.

Leaving the refugee camps is extremely dangerous, in view of the shoot-to-kill policy operated on Eritrean borders by the military on its own citizens. Often, the escape from Eritrea itself is managed by Eritrean army officers who operate the smuggling networks, benefitting the regime.

The smuggling routes are dangerous. Eritrean smugglers collude with kidnappers operating in full impunity. Many Eritrean refugees have been kidnapped while on exit trail and from the refugee camps, and were trafficked to Sinai, suffering extreme torture for ransom.

Once the trafficking networks received large payments from family members, they were released at the Israeli border. It is estimated than about 40,000 persons have passed in the torture houses in the Sinai, with an estimated 10,000 refugees murdered there. All of the Eritrean refugees in Israel have passed through the Sinai, while many have been victims of torture in the Sinai.

Since 2012, Israel has implemented a policy to detain and deport the refugees. In 2012, Israel has made it legal to detain newly arriving refugees for three years. Refugees were sent to a detention centre, operated by the Israeli Prison Service, in a remote location in the Negev, an area which the refugees referred to as “Israeli Sinai”, just a few kilometres from the border, a few kilometres from the torture houses in the Egyptian Sinai, where many were held. Israel allows and strongly pushes towards “voluntary” departure, even back to Eritrea, where the refugees have disappeared.

Israel completed a fence on its Southern Egyptian border. The Egyptian border force implemented a shoot-to-kill policy of refugees trying to escape to Israel. With the fence the border has become sealed for refugees. Israel does not allow persons arriving at its border to seek asylum.

Thus, since 2012 less than 400 refugees have entered Israel, none since 2017. Israel has since begun a detention-for-deportation policy of the refugee population residing within Israel. New legislation was adopted, allowing for indefinite detention in another detention centre in the same area, near the border.

Additionally, Israel has pressured the detainees and those under threat of detention (virtually all refugees who are single men), to self-deport themselves to Rwanda or Uganda. Rwanda and Uganda have denied the deal. The deal with Rwanda and Uganda is a state secret, and even the names of the countries are being kept confidential by order of the prime minister. Any information Israel holds regarding the agreements and the fate of the deportees in Rwanda and Uganda is confidential, also to the court.

This has created a new, unique system of a state-sponsored trafficking route. After five years and around 4,500 deportees, a significant amount of testimonies has been gathered and published by the UNHCR, NGOs, media and activists to describe the general mechanics of this scheme.

It is clear that Rwanda and Uganda act as “disconnection units”, disconnecting Israel from legal obligation to the deportees. In Rwanda, virtually all testimonials show that the deportees are having their money and documents taken by an official, at the airport. They are taken to a villa in Kigali, without passing through passport control at the airport. They are held in ‘the villa’ and they are not allowed to leave.

From there they are coerced to pay for being smuggled to Uganda, and they usually leave Rwanda within a few days. In Uganda they are left illegally, without any documents or safety. Only nine refugees are known by UNHCR to be currently be in Rwanda, left without papers and living on the street. According to Amnesty International, none of the refugees deported to Rwanda or Uganda were given asylum papers. The organisation finds the deal illegal under international law.

Refugees who are deported from Israel directly to Uganda also have their documents taken from them, and they are pushed into the hands of smugglers. They are deterred from mentioning any connection to Israel when applying for asylum, if they manage to apply. They are barred from Uganda’s limited resources for rural refugees, and live in fear of random kidnapping for ransom. Eritreans are specifically targeted, as it is assumed that they have money from Israel. Eritrean refugees are also particularly vulnerable and more likely to pay ransoms, as they fear the dangerous consequences of refoulement to Eritrea.

The Eritrean refugees are pushed into a well-consolidated trafficking route through South-Sudan, Sudan, Chad, the Sahara and Libya. Only if they arrive to Europe do they find safety. Today an estimated 4,500 Eritrean refugees have already been deported from Israel to Rwanda and Uganda. It is estimated that at least half of these have reached Europe, and many, at least dozens, have perished on the way, by murder in the Sahara, in the detention camps in Libya, and in the Mediterranean. UNHCR interviewed 80 refugees who had arrived in Rome through this route.

And even this already grim situation has now become worse. After the Israeli government was forced to reduce the detention time in Israel to one year, the government tried to move to a forced deportation policy of Eritrean refugees, again to Rwanda.

While the court approved this, it conditioned the scheme to the Government of Rwanda agreeing to accept persons deported by force. This scheme directly enables the trafficking networks. It is a state-sponsored human trafficking scheme which will bring thousands of new victims of human trafficking to the Libya detention centres from where the Eritrean refugees only have one option, which is to try to cross the Mediterranean to reach safety in Europe.

Pressure against the policy has grown, within Israel and supported by the worldwide Jewish communities. The role of Rwanda has been exposed in several publications, revealing its part in the trafficking scheme so far. Under such pressure, Rwanda is now no longer cooperating to give Israel the necessary approval to accept the Eritrean refugees, as demanded by the court in Israel.

This situation led to Netanyahu’s initial approval of the resettlement / absorption plan backed by the UN, in which half of the refugees from Israel would be resettled to Western countries.

The suspension of this plan is really bad news. It is bad news for Israel, as it will add to the tension and instability of an already embattled government. It is bad news for the Eritrean refugees in desperate need for some basic safety, and it will force desperate young men, left with no hope, to embark on the dangerous trafficking routes leading directly to Libyan detention centres. It is also bad news for Europe’s fight against human trafficking, as it will be at the receiving end of deeply traumatised refugees, who are victims of state-sponsored human trafficking schemes.