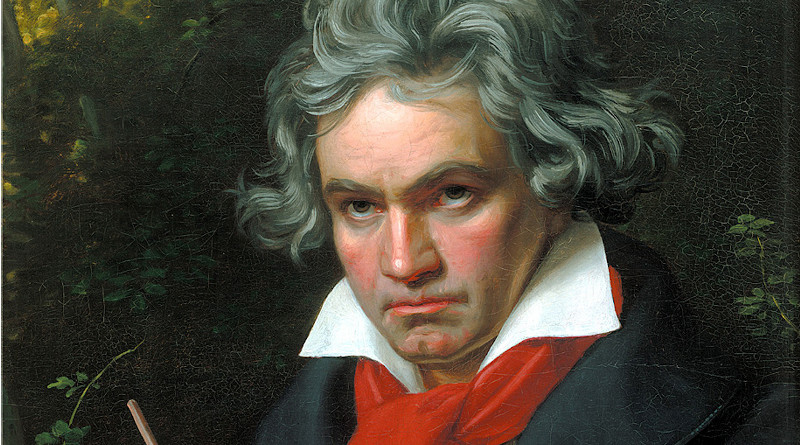 The year 2020 marks the 250th anniversary of Ludwig van Beethoven, the famous composer and pianist‎, well known all over the world. He was a genius with a disability. Germany’s UN City Bonn is very proud of its famous son, born here, next to the river Rhine.

We immediately recognize his famous Fifth Symphony with the sound known worldwide of ‘da-da-da-daaaa’, written between 1804 and 1808. It is one of the best-known compositions in classical music. Also, one of the most frequently played symphonies, and it is widely considered one of the cornerstones of western music. As Europeans, we particularly honour his Ninth Symphony, one of the first examples of a choral symphony, created by Beethoven from 1822 to 1824. It serves as the European anthem.

Whoever is driving through the city of Bonn sees the profile of Beethoven on traffic lights as they turn green. Everyone knows that the message of a green traffic light is “Go ahead, you are free to drive”. For me, the green traffic light connected to the silhouette of Beethoven has special reflections. I want to share these with you. In a nutshell: Beethoven, being a great composer, becoming slowly deaf, but not stopping his composing of masterpieces – a great attitude!

What initiated this idea in me? For several years now, I have done work in development policy on the rights of persons with disabilities. About one billion people are living with a disability, with a rising tendency due to longevity of life. Eighty per cent of persons with disabilities are inhabitants of developing countries, where life is often much harder for vulnerable groups.

A UN treaty, the Convention on the Rights of Persons with Disabilities (CRPD), signed by 163 countries and the European Union, is protecting them since 2006. However, in several countries, they still have to fight or appeal for their rights. This state of affairs has to change, and all of us have to be part of this cultural alteration – the sooner, the better.

Getting back to Beethoven: His pieces of music are famous, on all continents. His extraordinary musical talent became evident at an early age, and his father intensively taught him. Born in 1770 in Bonn, he moved to Vienna at the age of 21, spending the rest of his professional life there. In Vienna, he worked together with Haydn, soon establishing a reputation in the Austrian capital, performing in the salons of the Viennese nobility which offered him financial support.

However, when the 19th century started, his hearing began to deteriorate, turning him almost completely deaf by 1814, when he gave up performing and appearing in public.

But his deafness did not prevent him from continuing his work: The famous Ninth Symphony, one of the first examples of a choral symphony, was created by him from 1822 to 1824. This masterpiece is regarded by many musicologists as Beethoven’s most outstanding work and considered as one of the supreme achievements in the history of western music.

The words derive from a poem written by the German poet Friedrich Schiller, the famous “Ode to Joy” with some text additions by the composer himself. This musical masterpiece stands as one of the most often performed symphonies of the world. At an early stage of European integration, the Ninth Symphony became the anthem of Europe. A great choice!

Try imagining – a deaf composer composing such a valuable symphony – using nothing but his existing knowledge of the sound of music and the pure imagination of vocal and instrumental tone. Not allowing deafness to hold up his incredible talent, but pursuing his way with all his power, creativity and vigour. Fantastic!

For this reason, I have always been impressed by Beethoven. And I am even more impressed these days, when the Ninth Symphony in March 2020 rang out during the ongoing coronavirus pandemic in Italy, Spain and Germany.

Women and men, sang out from their balconies, sending out a signal of hope to the world. The choice of this symphony reminds us, in times of crisis, what is most relevant: fellowship and solidarity.

Music acts as an effective remedy against despair and loneliness to counter the crisis. So, put on the music and enjoy, despite everything, paying tribute to a talented deaf composer showing us the way out of desperation, only by staying active and motivated.

So, when the green traffic light appears, take note of the lesson:! Whatever occurs in your life, keep on going ahead, as no disability will ever be strong enough to limit your special talent.

The writer, Dr Heike Kuhn, is Head of the “Human Rights Gender Equality, Inclusion of Persons with Disabilities” of the German Federal Ministry for Economic Cooperation and Development.