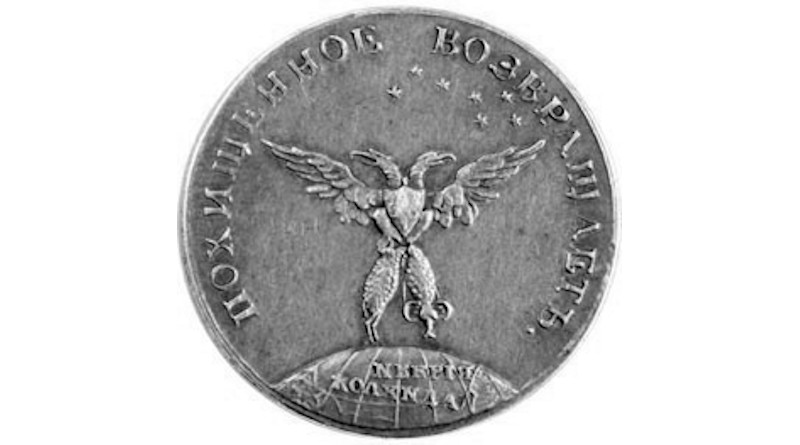 Recently the Golden Fleece mythology resurfaced. After the disintegration of the Soviet Union, Russia in the early 1990s fanned separatist movement in Georgia’s Abkhazia.

All over the Ancient World Golden Fleece was obvious symbol of honor, wealth and glory for Colchis, i.e. Western Georgia. In the Middle Ages double-headed eagle existed as a common symbol for the Byzantine Empire and the allied countries, “Byzantine Commonwealth”, Georgia included. Then it became coat of arms of the Russian Empire and later – of the Russian Federation.

When the Georgians contemplated an alliance with the Russians in the 18th c., they placed double-headed eagle on their money (Tedo Dundua and Others. Online English-Georgian Catalogue of Georgian Numismatics http://geonumismatics.tsu.ge/en/catalogue/types/?type=114). Instead, they received abolishment of the local kingship and from then on had the Russian Tsar as a king. Russians rejected double-headed eagle for Georgians, and as a compensation “brought back the Golden Fleece” to them. Below is the whole story.

At the beginning of the 19th c. Kartalino-Kakhetian Kingdom (Eastern Georgia) became a part of the Russian Empire. Preparations were made for reorganization of old Tbilisi mint, then under the Russian control. On September 15 of 1804 the mint was inaugurated in the former royal bath celebrated by issuing the commemorative medal (T. Dundua, G. Dundua, N. Javakhishvili, A. Eristavi. Money in Georgia. Tbilisi. 2003, p. 98).

Quite a rare one, its description is as follows:

Obverse: Russian double-headed eagle (former coat of arms of Byzantium) soaring towards Iberia and Colchis, bearing in its claws the Golden Fleece, with the Russian legend (inscription) – “it restores what was stolen”.

Recently the Golden Fleece mythology resurfaced. After the disintegration of the Soviet Union, Russia in the early 1990s fanned separatist movement in Georgia’s Abkhazia. Later on, in the 2000s this led to an outright military and financial support to the separatists which culminated in the illegal recognition of independence of Abkhazia by Russia in 2008. With nearly 5 000 troops stationed in Abkhazia, Russia effectively occupies the region since that period.

These geopolitical moves needed to be bolstered by ideology and propaganda. First was an incorrect but purposeful use of history by Russia to claim that Abkhazia has always been separate from the rest of Georgia, while in fact all historical sources clearly indicate that Abkhazia was a classic Georgian region (http://georgiatoday.ge/news/16964/Abkhazians-%26-Ossetians-in-Georgia.-A-Short-History).

To support their story, the Russians went back to the Golden Fleece narrative. Russian actions reflected a simple geopolitical thinking: if before Georgia was close to Russia, no threat was made to the historical knowledge, in this case the Golden Fleece story. Once Georgia deviated from pro-Russian foreign policy stance, the Kremlin began twisting its propaganda and eventually shifting the historical narrative to support Abkhazia’s separatist aspirations ideologically.

This became especially apparent in the post-2008 period. Take for example, 2014 Winter Olympics held in Sochi.To bolster the prestige of the Olympic city, the Russian propaganda started to circulate the narrative that it is not Colchis where the Argonauts visited, but Sochi. Indeed, the preparations for this narrative were in work even before 2014.In 2008 a sculpture was erected in Sochi commemorating “historical” connection between Greece and the city. Nearing the Olympics, the Russian state media dedicated a whole TV program to the twisted narrative of Sochi being a real destination of the Argonauts. And lastly, during the opening ceremony of the Olympics, the Russians mistakenly showed Sochi as a place of Argonauts’ visit.

The Kremlin’s narrative is simple: with Georgia being pro-Western in political sense, Russia began to wage an ideological war with large-scale propaganda to distort history and essentially connect its territory (Sochi) and partially Abkhazia to the Argonauts myth.

Geopolitics and propaganda are deeply intertwined in Russia’s foreign policy. Sudden foreign policy changes could bring about drastic propaganda twists. The Argonauts’ case reflects these trends, but this also creates troubles as historical sources and century-old academic literature views Colchis – Western Georgia (including modern-day Abkhazia) as a “homeland” of the famous Golden Fleece.

Source: This article was published by Georgia Today