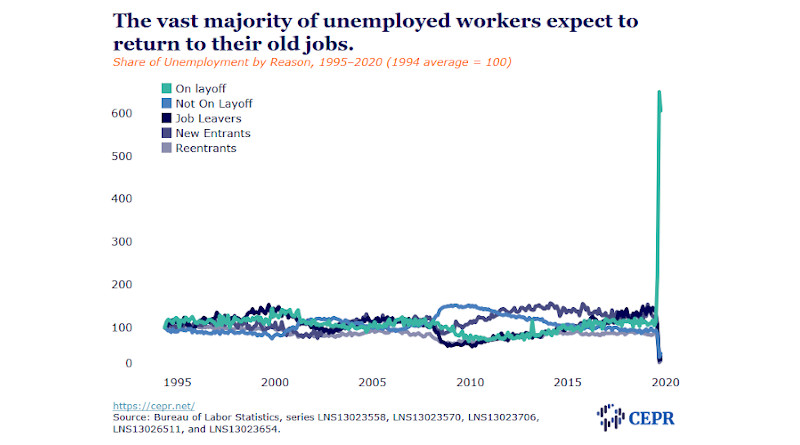 The May jobs numbers were considerably better than most analysts had expected with the economy reportedly adding 2,509,000 jobs, while the unemployment rate fell by 1.4 percentage points to 13.3 percent. This improved labor market picture should not have been surprising since many businesses across the country had reopened by the survey week in mid-April. The high number of unemployment insurance claims, continuing through May, likely gave a wrong picture, as delays in processing caused claims to appear much later than they had been filed.

Both construction and manufacturing showed huge job growth in May, adding 464,000 and 225,000 jobs, respectively. Employment in these sectors is down 5.8 percent and 8.7 percent, respectively over the last year. The relatively strong construction employment data is consistent with data on April construction levels, which showed a limited falloff in most categories of construction. An encouraging note on manufacturing is the one-month diffusion index, which shows the percentage of industries planning to increase employment, was 70.4 in May. (It was 60.4 for the overall economy.)

Retail added 367,800 jobs in May, but employment was still 12.5 percent below year-ago levels. Department stores have been especially hard hit with employment down by 21.2 percent over the last year. By contrast, employment at online retailers is down by just 6.9 percent since May 2019.

State and local government employment fell by another 571,000. It is now 1,571,000 below February levels. With these governments facing massive budget shortfalls due to the shutdowns, another large round of layoffs is a virtual certainty if Congress does not appropriate a large rescue package. This will be a huge drag on the recovery, especially since these governments will need to be hiring large numbers of testers and trackers if businesses are to be able to operate safely.

One encouraging sign was a drop in average weekly hours in manufacturing of 4.2 percent from year-ago levels. This indicates employers are cutting hours rather than laying off workers. This drop translates into hundreds of thousands of additional jobs in the sector.

The wage data show a sharp year-over-year rise, but this is due to composition effects (lower-paid workers have lost their jobs), so it is best ignored.

As noted, the data in the household survey was somewhat better than had generally been expected. It is important to note that the Bureau of Labor Statistics warns that many people who were laid off without pay were wrongly counted as employed. If these people had been counted correctly, the unemployment rate would have been roughly 16.3 percent. In April, this error had lowered the reported unemployment rate by roughly 5.0 percentage points.

One very positive sign is that the vast majority of unemployed workers, 73.0 percent, report being on temporary layoffs. This group typically accounts for around 10.0-14.0 percent of the unemployed. Obviously, many of these layoffs will turn out to be permanent, but it seems likely that a large share of the unemployed will be able to go back to their jobs.

It is hard to see a 13.3 percent unemployment rate as positive, but it does support the view of the economy facing a severe recession, as opposed to a complete collapse. This is consistent with data showing that construction and home buying remain healthy and new orders for capital equipment have not fallen through the floor.

The improvement from April really should not have been surprising, since we should have expected more people to be working when it was legal to work than when it was not, due to the shutdown. However, we are still looking at unemployment that is far worse than the Great Recession and the recovery will be seriously impaired by more layoffs in the state and local government sectors unless there is a large rescue package.

Home » US Employment Jumps 2.5 Million In May, As Unemployment Falls To 13.3 Percent – Analysis