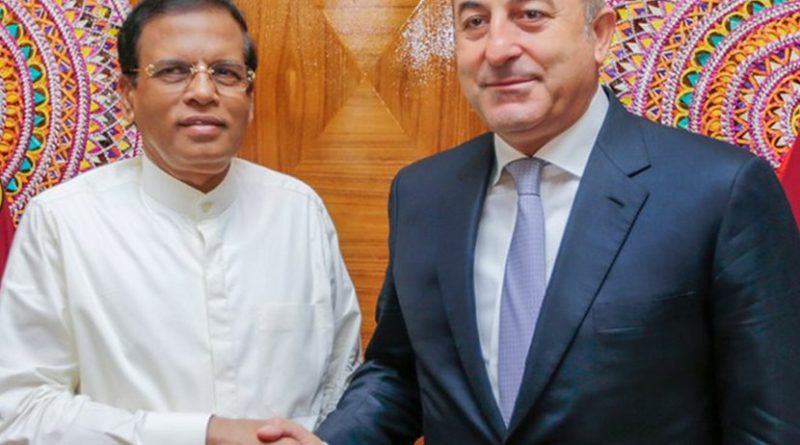 A new partnership is taking shape with slow, but determined steps taken by Turkey and Sri Lanka. While one cannot talk about a very intimate relationship between the two countries, both political and economic relations are increasingly gaining strength.

It is also necessary to indicate that at this point, both sides express a strong will to develop bilateral relations. In this vein, the Department of International Relations of the Middle East Technical University and the Embassy of Sri Lanka in Ankara held a joint panel entitled “Turks and Sri Lankans: Through Historical Links to the Future” on June 19, 2017, thus providing an opportunity to comprehensively assess Turkey-Sri-Lanka relations.

Turkey-Sri Lanka relations have a deep history dating back to the 19th century. The Ottoman Empire opened its first diplomatic representative to the British-ruled Sri Lanka (Ceylon) in 1864. The Ottoman Sultan, Abdulhamid II sent the imperial ship (Ertugrul) to Japan, the ship was docked in Colombo on November 1, 1889 for its logistical needs. The Turkish officials and crew formed good relations with local community and more than 200 thousand Sri Lankans visited the Ertugrul frigate. The Turkish honorary consulate had served until 1915, the year that the Ottoman Empire participated to the World War I against the British Empire.

Just after the end of the Second World War, Ankara had set up diplomatic relations with Colombo on February 4, 1948 after Sri Lanka gained its independence. However, the revitalizing of relations between Turkey and Sri Lanka is a very recent process. Whilst Sri Lanka had opened its Ankara Embassy in 2012, Turkey opened the Colombo Embassy in 2013.

The mutual senior level visits conducted between the two countries are rare. Sri Lankan Prime Minister Ranashinghe Premedasa had conducted the first senior level visit to Turkey in May 1986 upon an invitation of his Turkish counterpart, Turgut Ozal. The two leaders discussed how to build up political and economic relations between Turkey and Sri Lanka. Later, Turkey decided to open an embassy in Colombo in 1987, but the decision could not be implemented due to financial shortcomings of the Turkish government at the time. After 17 years of this visit, Prime Minister Recep Tayyip Erdogan paid a visit to Sri Lanka in December 2004 in the aftermath of the tsunami disaster hit to South and Southeast Asian nations. In return, President Mahinda Rajapaksa made an official visit to Turkey in 2008.

Bilateral trade relations also started to flourish throughout the 2010s. Economic relations, starting with a trade volume of $17 million in 1990, reached their highest volume at $188 million in 2010. Yet in 2016, the bilateral trade volume declined to $157 million. In 2016, Turkey imported merchandise worth $105 million from Sri Lanka while it could only export goods worth $52 million to its counterpart.

Turkey and Sri Lanka could undertake joint enterprises in the regions and sectors they have a competitive advantage. For example, Turkish companies are placed in an advantaged position in Eurasia and Africa in industries such as construction, textiles, agricultural production and food security. Sri Lanka is also emerging as an investment and production hub for South Asia.

Another area for cooperation between the two countries is tourism. Turkey hosts some of the best hotel chains in Europe and has gained a considerable experience regarding its facilities and its tourism policies. In this context Turkey is a desirable partner both with regards to its tourism industry and with regards to Turkish tourists. On the other hand, Sri Lanka carries an important tourism potential and needs to increase both the number of touristic facilities inside the country and the quality of service in its facilities. Turkish and Sri Lankan companies could cooperate in these fields including jointly setting up and managing facilities.

One of the most pressing priorities in terms of bilateral relations is cooperation in the field of education. This is because it would be difficult to further strengthen relations without mutual constituent bases who are acquainted with one another. Currently there exists no a cooperation agreement or exchange programs between Turkish and Sri Lankan universities. At this stage, it is necessary to increase mutual student and academic exchange programs. Also, there are no institutions instructing in Sinhalese and Tamil in Turkey and vice-versa. It is also important to set up think tanks that would conduct research on possible opportunities for political, economic and cultural cooperation between Turkey and Sri Lanka.

There are some opportunities to develop the Turkish- Sri Lankan relations in the multilateral framework. Firstly, a dialogue partner of the Shanghai Cooperation Organization (SCO), Turkey and Sri Lanka participates in some of the meetings and activities that are carried out by the group. Therefore, the SCO can serve as a leverage as far as the introduction of a joint regional policy by Turkey and Sri Lanka is concerned. With the accession of India and Pakistan in 2017, the SCO now turns to an Asian organization from the Eurasian grouping in the initial stage.

Secondly, China’s ‘One Belt One Road’ Initiative (BRI) shines out another major opportunity that Sri Lanka and Turkey need to seize upon if they are to realize economic integration on the bilateral level and beyond. Since its initial announcement, this initiative has deeply resonated with both the region and the wider globe. It is both in terms of their financing and the vast geographical area they are envisaged to cover that the set of projects as designed to form the backbone of BRI have increasingly become an object of intense discussion. Within the BRI, Turkey is a part of overland Silk Road in the Eurasian landmass, while Sri Lanka is a part of Maritime Silk Road. At this Juncture, Turkey and Sri Lanka should develop alternative solutions to integrate the two countries within the BRI and urge China and other regional partners to support the idea.

One thought on “Sri Lanka And Turkey Relations: A Flourishing Partnership In Asia – OpEd”