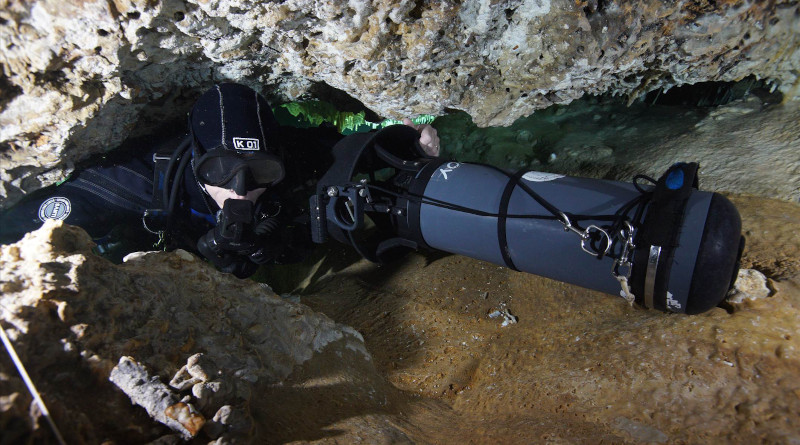 A diver from Centro Investigador del Sistema Acuífero de Q Roo (CINDAQ A.C.) examines the oldest ochre mine ever found in the Americas, used 10,000-12,000 years ago by the earliest inhabitants of the Western hemisphere to procure the ancient commodity. The mine holds some the best-preserved evidence of the earliest inhabitants of the hemisphere and was found in a cave that is now underwater in Mexico's Yucatan Peninsula. Credit: © CINDAQ.ORG

A team of underwater cave explorers in Mexico have made unprecedented archeological discoveries in some of the most inaccessible places on Earth that unlock key mysteries about the earliest inhabitants of the Western Hemisphere, according to international experts who have studied the sites.

The finds reveal new details about important facets of life for these earliest Americans, about which almost nothing was previously known. They also open rare new areas of archeological exploration.

In the first study on the new discoveries, published today in the journal Science Advances, researchers from Canada, and the United States, working with the cultural authorities of Mexico, show that the discoveries represent the oldest known ochre mines in the Americas.

These unique finds explain for the first time the evidence of ancient human activity and remains in the submerged caves. Previously reported finds include Naia, the name given to the most complete skeleton of these among the earliest Americans, which clarifies how the Western Hemisphere was first populated.

While Naia added to the understanding of the ancestry, growth and development of these early Americans, little was known about why she and her contemporaries took the risk to enter the maze of caves found below the surface of the Yucatan peninsula. With exploration of these new sites just getting started, the potential for still more mysteries to be unlocked is enormous.

HOW THE DISCOVERIES WERE MADE

The surface entrances to the caves are 8-10 kilometers inland from beaches that draw so many visitors to the Yucatan peninsula, but had not been fully explored.

In 2017, a team of underwater cave-diving explorers went much farther into one of the caves than any others had been, navigating several kilometers underwater through passages as narrow as 70 cm.

Having explored hundreds of kilometers of underwater caves never before entered by humans, the divers recognized the underwater subterranean landscape had been unnaturally altered, indicating they were not the first people to have been to these caves. It was later learned the previous visitors were there 10,000 years ago and more.

The divers brought the discovery to the attention of Mexican authorities as well as experts from the academic disciplines needed to fully understand its significance.

WHAT’S BEEN DISCOVERED SO FAR

The elaborate cave passages were once dry, but as sea levels rose most of the caves were flooded by about 8,000 years ago, creating the ideal conditions to preserve human activities.

So far, about 7,000 metres of flooded subterranean passages in three cave systems have been explored, mapped, photographed and tested, with mining found in about 900 metres.

This has revealed for the first time remarkably preserved mining sites that include ochre extraction beds and pits, digging tools, shattered debris that has been piled by human effort, navigational markers and fire pits.

In some areas, the cave ceiling is still visibly blackened by what appears to be the soot of the small fires.

The evidence of ancient cave exploration and mining spans a period of many generations over about 2,000 years and dates from between 12,000 and 10,000 years ago. This was 8,000 years before the establishment of the Maya culture for which the region is well known, with the well-preserved archeological sites of Tulum and Chichen Itza.

The timing and duration of ochre mining coincides with the onset of major ecological changes, sea-level rise, and extinction of megafauna such as giant ground sloths and sabre-toothed cats.

WHAT’S BEEN LEARNED SO FAR

Now, for the first time, we know why the people of this time would undertake the enormous risk and effort to explore these treacherous caves. At least one reason was to prospect and mine red ochre, a highly valued mineral pigment used widely by the earliest inhabitants of the Western Hemisphere. Remains of at least nine individuals from the pre-flooded era had previously been found in the long-submerged cave systems of the Yucatan peninsula. There had been speculation about what would have driven them into places so complex and hazardous to navigate, such as temporary shelter, fresh water, or burial of human remains, but none of the previous speculation was well-supported by archeological evidence.

Now, for the first time, we also have evidence of a source of red ochre for the period. It’s the oldest known ochre mine in the Americas and the first from the Paleoindian period. Despite the previously known ubiquitous and sustained use of ochre among Paleoindian peoples, there was virtually no archeological evidence available until now concerning early ochre prospecting and mining methods in the Americas.

The discovery has the potential to help us understand the social and behavioral complexities of the region’s earliest inhabitants.

This new research shows ochre was of great, if not critical, importance to the culture and lives of Paleoamericans, given they were willing to take such enormous risks to get it. Red ochre is the most commonly identified inorganic paint, used throughout human history. It’s considered to be a key component of human evolutionary development and behavioral complexity. Ochre minerals were collected for use in rock paintings, mortuary practices, painted objects and personal adornment. They may even have had medicinal qualities.

The mining activity from more than 10,000 years ago also shows the early application of geological principles that were not formally recognized until the 17th century.

The abundance and diversity of animal and plant remains found in these submerged caves enables scientists to recreate what the environment was like for Ice Age Americans.

There are nearly 2,000 km of known underwater cave systems in the Yucatan peninsula that the cave exploration researchers and scientists are confident will yield new and important discoveries.

Continued mapping and study of the mining activity in these and other caves will reveal the extent of the activity, providing a rare insight into these early inhabitants of the Americas. It will also add to the understanding of this early mining industry and the application of geological principles to the prospection and exploitation of this valuable resource.

Explorers and scientists are working toward a more comprehensive understanding of the complex network of underground rivers of the eastern Yucatan peninsula, both in terms of the history they contain and the contemporary living systems they support.

Refine the timing of the ancient mining activity and when people were there.