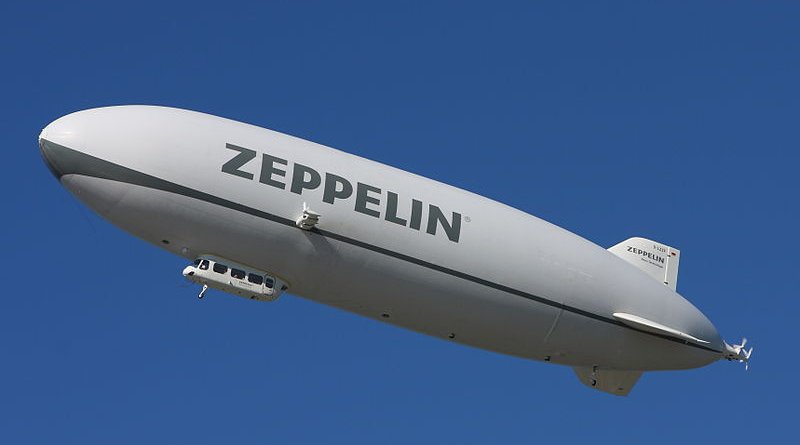 Reintroducing airships into the world’s transportation-mix could contribute to lowering the transport sector’s carbon emissions and can play a role in establishing a sustainable hydrogen based economy. According to the authors of an IIASA-led study, these lighter-than-air aircraft could ultimately increase the feasibility of a 100% sustainable world.

Airships were introduced in the first half of the 20th century before conventional aircraft were used for the long-range transport of cargo and passengers. Their use in cargo and passenger transport was however quickly discontinued for a number of reasons, including the risk of a hydrogen explosion – for which the Hindenburg disaster of 1937 served as a stark case in point; their lower speed compared to that of airplanes; and the lack of reliable weather forecasts.

Since then, considerable advances in material sciences, our ability to forecast the weather, and the urgent need to reduce energy consumption and CO2 emissions, have steadily been bringing airships back into political, business, and scientific conversations as a possible transportation alternative.

The transport sector is responsible for around 25% of global CO2 emissions caused by humans. Of these emissions, 3% come from cargo ships, but this figure is expected to increase by between 50% and 250% until 2050. These projections necessitate finding new approaches to transporting cargo with a lower demand for energy and lower CO2 emissions. In their study published in the Springer journal Energy Conversion and Management, researchers from IIASA, Brazil, Germany, and Malaysia looked into how an airship-based industry could be developed using the jet stream as the energy medium to transport cargo around the world.

The jet stream is a core of strong winds that flows from west to east, around 8 to 12 kilometers above the Earth’s surface. According to the researchers, airships flying in the jet stream could reduce CO2 emissions and fuel consumption, as the jet stream itself would contribute most of the energy required to move the airship between destinations, resulting in a round trip of 16 days in the northern hemisphere, and 14 days in the southern hemisphere. This is considerably less time compared to current maritime shipping routes, particularly in the southern hemisphere.

The researchers postulate that the reintroduction of airships into the transport sector could also offer an alternative for the transport of hydrogen. Hydrogen is a good energy carrier and a valuable energy storage alternative. Given that renewable electricity, for example, excess wind power, can be transformed into hydrogen, there is optimism that the hydrogen economy will form a fundamental part of a clean and sustainable future. One of the challenges to implementing a hydrogen-based economy is cooling the hydrogen to below -253°C to liquefy it. The process consumes almost 30% of the embodied energy, with further energy of around 3% required to transport the liquefied hydrogen.

To address the risk of combustion of the hydrogen in the airship, the authors suggest automating the operation, loading, and unloading of hydrogen airships and designing flightpaths that avoid cities to reduce the risk of fatalities in the event of an accident.

According to study lead-author Julian Hunt, an IIASA post-doctoral fellow, a further interesting aspect unveiled in this study is the possibility that airships and balloons can also be used to improve the efficiency of liquefying hydrogen. As the temperature of the stratosphere (where the airships will be flying to utilize the jet stream) varies between -50°C to -80°C, it means that less energy will be required to meet the -253°C mark if the process happens onboard the airship. The energy required for the additional cooling needed can be generated using the hydrogen in the airship.

Hunt says that this process also presents a number of additional possibilities: The process of generating energy from hydrogen produces water – one ton of hydrogen produces nine tons of water. This water could be used to increase the weight of the airship and further save energy in its descending trajectory.

Another possible application for the water produced is rainmaking, which involves releasing the water produced from the stratosphere at a height where it will freeze before entering the troposphere where it would then melt again. This reduces the temperature and increases the relative humidity of the troposphere until it saturates and starts raining. The rain will in turn initiate a convection rain pattern, thus feeding even more humidity and rain into the system. This process could be used to alleviate water stress in regions suffering from shortages.

“Airships have been used in the past and provided great services to society. Due to current needs, airships should be reconsidered and returned to the skies. Our paper presents results and arguments in favor of this. The development of an airship industry will reduce the costs of fast delivery cargo shipping, particularly in regions far from the coast. The possibility to transport hydrogen without the need to liquefy it would reduce the costs for the development of a sustainable and hydrogen based economy, ultimately increasing the feasibility of a 100% renewable world,” concludes Hunt.