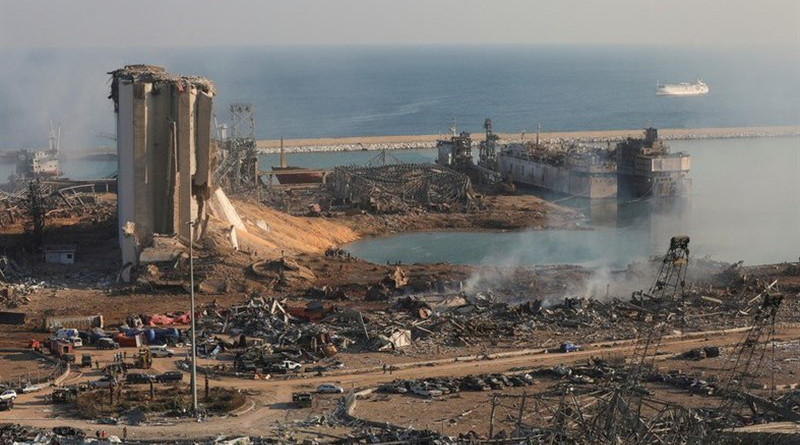 (RFE/RL) — Media reports say a large supply of ammonium nitrate that exploded on August 4 at a warehouse in the port of Beirut was likely unloaded there years earlier from a cargo ship that had been seized from its Russian owner, businessman Igor Grechushkin.

Lebanese Interior Minister Mohammed Fahmi told a local TV station the blast that killed more than 100 people and injured thousands across the city appeared to be caused by the detonation of more than 2,700 tons of ammonium nitrate.

Fahmi said the highly explosive fertilizer had been stored at the dockside warehouse since it was confiscated from a cargo ship in 2014.

Prime Minister Hassan Diab said around 2,750 tons of seized ammonium nitrate had been stored in the warehouse for six years without safety measures.

Diab said those responsible for the safety breach would be held responsible.

Lebanon’s General Security chief, Abbas Ibrahim, has also said that the “highly explosive material” had been stored in the warehouse since it had been confiscated years earlier.

Based on that timeline and the size of the cargo, media reports say the ship was likely the MV Rhosus — which had been owned at the time of its seizure by Grechushkin.

A businessman from the Siberian city of Khabarovsk, Grechushkin currently lives in Cyprus.

The MV Rhosus was initially confiscated by Lebanese authorities in 2013 under an order by local inspectors in Beirut after it had entered the port due to technical problems, according to lawyers involved in a court case over its seizure.

Boris Prokoshev, who was MV Rhosus’s captain at the time, confirmed in an August 5 interview with RFE/RL that the vessel had been owned by Grechushkin in 2013.

Prokoshev also confirmed reports that the vessel had been transporting ammonium nitrate from Georgia’s Black Sea port of Batumi to Mozambique when it experienced technical problems that forced it to stop in Beirut.

Prokoshev also told RFE/RL the MV Rhosus was a very old vessel that sank two or three years ago because nobody was maintaining the ship.

Prokoshev said Grechushkin still owes tens of thousands of U.S. dollars in unpaid wages to him and other crew members. He said all of his attempts to sue Grechushkin in Russia have failed because the businessman no longer resides in Russia.

Media reports in Russia and Moldova on August 5 said the MV Rhosus had been sailing under the flag of Moldova when it arrived in Beirut.

Odessitua.com website’s reported that most of the ship’s crew had been Ukrainian sailors who were temporarily stranded in Beirut in 2013 after Grechushkin ran out of funds to pay their salaries or for the ship’s fees.

Prokoshev described being stranded in Lebanon with the ship’s other unpaid crew members as a form of “incarceration,” saying that Grechushkin had left the crew without any financial or other support.

He also blamed Lebanese authorities for the massive explosion on August 4.

“They should have gotten get rid of the vessel right away instead of confiscating it and demanding fees for harboring it,” Prokoshev told RFE/RL.

“Secondly, we are talking about ammonium nitrate here. They could have used it for their [agricultural] fields. Nobody was claiming it, which means it belonged to nobody,” Prokoshev said.

Lebanese authorities are still investigating the cause of the fire that led to the massive explosion. They have not yet announced what they think was the definitive cause of that fire.

However, Lebanon’s LBCI-TV reported on August 5 that, according to preliminary information, the fire that set off the explosion was started accidentally by welders who were closing off a gap that allowed unauthorized entry into the warehouse.

LBCI said sparks from a welder’s torch are thought to have ignited fireworks stored in a warehouse, which in turn detonated the nearby cargo of ammonium nitrate that had been unloaded from the MV Rhosus years earlier.

Independent experts say orange clouds that followed the massive blast on August 4 were likely from toxic nitrogen dioxide gas that is released after an explosion involving nitrates.

In the devastated city on August 5, the Red Cross was coordinating with Lebanon’s Health Ministry for morgues to take victims because hospitals were overwhelmed.

With thousands of injured in hospitals and many other people still buried under debris on August 5, the death toll was expected to rise.

Beirut’s governor, Marwan Abboud, said on August 5 that as many as 250,000 people lost their homes as a result of the enormous explosion.

He said authorities have launched a massive humanitarian operation to provide food, water, and shelter to those who’ve been displaced.