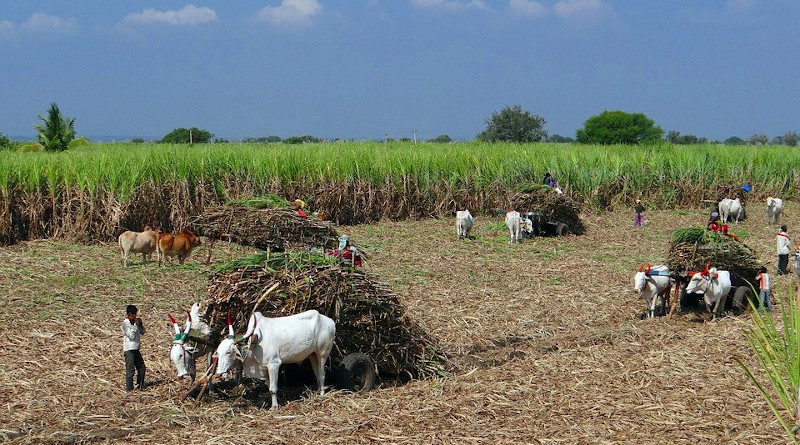 Generations of political support for sugar cultivation have helped India become the second-largest producer of sugar worldwide. Now, the country’s commitment to renewable energy could create additional benefits, like conserving natural resources and providing better nutrition to the poor.

Stanford researchers conducted the first comprehensive analysis of India’s sugar industry and its impact on water, food and energy resources through the lens of its political economy – that is, how entrenched political interests in sugar production threaten food, water and energy security over time. The results show that a national biofuel policy encouraging production of ethanol made directly from sugarcane juice may make India’s water and energy resources more sustainable. Using sugarcane juice instead of molasses would also free up land and irrigation water for growing nutrient-rich foods. The research was published in Environmental Research Letters.

“There are spillover effects between sectors, unintended consequences,” said co-author Rosamond Naylor, a food security expert and the William Wrigley Professor in Stanford’s School of Earth, Energy & Environmental Sciences (Stanford Earth). “It’s very instructive to think about the connection between food, water and energy because the solution may not be in the sector you’re focusing on.”

Somewhat analogous to the corn industry in the U.S., which has shifted about 40 percent of its output to ethanol production in recent years, policymakers in India – many of whom benefit financially from the sugar industry – are currently exploring how to use sugarcane to increase energy independence and shift toward renewable energy use.

The Indian government has set a goal to increase the ethanol-to-gasoline blending rate from its current rate of about 6 percent to 20 percent by 2030 and introduced several policies to promote production of ethanol from sugarcane. The increased blending rate is a “desirable goal for improved energy security,” the researchers write. However, its effects on human health and the environment will largely depend on which sugar product ends up being the main feedstock: juice extracted from crushed sugarcane, or molasses, a by-product from sugar processing.

India’s national policy on biofuels only recently began allowing use of sugarcane juice in ethanol production, in addition to molasses.

“If the energy industry continues to use molasses as the bioethanol feedstock to meet its target, it would require additional water and land resources and result in the production of extra sugar,” said co-author Anjuli Jain Figueroa, a postdoctoral researcher in Earth system science. “In contrast, if the industry used the sugarcane juice to produce ethanol, the target could be met without requiring additional water and land beyond current levels.”

Using sugarcane juice to create ethanol could also help alleviate government spending to subsidize sugar and sell it below cost in its public distribution system.

The public distribution system of sugar in India dates to the 1950s, when frequent famines plagued the country. Back then, sugar helped to meet basic calorie requirements. But today – with micronutrient deficiency leading to illness, disabilities and even death – the Indian government is more concerned with nutrition.

“In India right now, even poor populations have met their basic calorie needs,” said Naylor, who is also a senior fellow at the Stanford Woods Institute for the Environment. “They have been able to buy sugar at subsidized prices, but meanwhile they don’t have access to adequate protein and micronutrients for cognitive growth and for physical well-being.”

Sugarcane cultivation in India has expanded in part because of policies that incentivize production, including a minimum price, guaranteed sales of sugarcane and public distribution of sugar. These regulations have become entrenched over many generations, making the crop highly profitable to the 6 million farmers in the country, but the empty-calorie crop reduces the amount of resources available for micronutrient-rich foods.

“Using scarce natural resources to produce a crop that doesn’t fulfill nutritional needs for the second most populated country in the world can place pressure on the global food system if more and more food imports are required to meet the rising demand in India,” Naylor said.

The researchers focused their analysis on Maharashtra in western India, one of the country’s largest sugarcane-producing states. Sugarcane cultivation in Maharashtra has increased sevenfold in the past 50 years to become the dominant user of irrigation water. The study found that in 2010-11, sugarcane occupied only 4 percent of Maharashtra’s total cropped areas but used 61 percent of the state’s irrigation water. Meanwhile, irrigation for other nutritious food crops remained lower than the national averages.

“Irrigation of sugarcane in our study region is about four times that of all other crops and has doubled from 2000 to 2010. This resulted in about a 50 percent reduction of river flow over that period,” said co-author Steven Gorelick, the Cyrus Fisher Tolman Professor at Stanford Earth. “Given that this region is susceptible to significant drought, future water management is likely to be quite challenging.”

“Despite the importance of sugarcane in the water, food and energy sectors in India, there are no reliable sugarcane maps for recent years and in time series,” Lee said. “Using remote sensing data, I am developing current time-series sugarcane maps in Maharashtra – an important step forward.”

The agricultural area of Maharashtra is considered drought-ridden, and yet in September 2019, the region experienced major floods that killed 21 people and caused 28,000 residents of Pune city to evacuate.

While the researchers started the FUSE project in Maharashtra with an explicit focus on drought management, their objectives expanded to include flooding after witnessing the devastation of Pune during their research period, presenting “a far more difficult water management problem,” according to co-author Steven Gorelick.

“Climate projections over the next 40 to 80 years suggest maybe a 10 percent increase in rainfall, but much greater variability – and that variability is what worries me the most, in terms of future management of both floods and droughts,” Gorelick said.